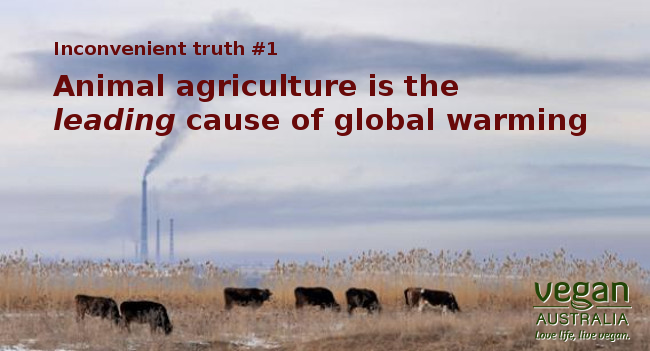 Animal agriculture is the leading cause of global warming. We are all concerned about climate change and most people support the move to renewable energy. But many of us are unaware of the catastrophic effect meat, dairy and egg production is having on global warming and other environmental issues. In Australia, animal agriculture emits about 50% of all greenhouse gases, when accounted over 20 years. This is more than all other sources, including energy generation and transport. Animal agriculture produces greenhouse gases through land clearing for grazing, methane produced by cows and sheep, savanna burning for clearing and emissions from manure.

In their greenhouse gas calculations, the IPCC and other international environmental organisations use a Global Warming Potential (GWP) for comparing greenhouse gases using a 100-year time frame. The decision to use a 100-year time frame is arbitrary. The IPCC states that "There is no scientific argument for selecting 100 years compared with other choices. The choice of time horizon is a value judgement." The convention to use a 100-year time frame was decided several decades ago, before the urgent need to avoid climate-system tipping points was understood. Given the urgency of the emissions reductions required to avoid catastrophic temperature increases, a 20-year Global Warming Potential (GWP-20) is much more relevant. Over 20 years, the warming potential of methane is about 5 times higher than over 100 years. Animal agriculture is the largest source of methane and so if we measure the impact of sectors using a 20-year time frame, the climate impact of agriculture is significantly higher.

The IPCC and other groups also ignore the impact of short-term gases on global warming. In the short time we have available to overcome climate change, the Global Warming Potential of these short-lived gases becomes much more significant. Most of these gases are emitted by animal agriculture.

Once we understand that animal agriculture is a major cause of global warming, a simple, effective and relatively quick solution becomes clear. By abolishing the use of animals for food, we not only act ethically for the animals, but also help slow and eventually reverse global warming.

The economic impact of removing animals from the agricultural system will not be as significant as most people believe. The animal agriculture industry is a relatively small part of the modern Australian economy. It currently contributes about 1.2% to the Australian GDP and employs less than 1.5% of the Australian workforce.

If animals were no longer part of the agricultural system, there would be significant positive impacts not just on global warming, but also on other aspects of the environment. Woodlands and forests could be revegetated, marine environments and wildlife habitats could be restored, biodiversity increased, species extinctions reduced, and water use, soil loss and pollution all reduced.

Alongside these benefits, any negative economic impacts could be carefully managed to avoid dislocation, by reskilling workers and reusing land for other purposes. Currently, over half of the Australian continent is used for animal agricultural. Much of this could be used for sequestering carbon which would remove carbon dioxide from the atmosphere and hence start to reverse global warming.

At an individual level, the single best thing you can do for the environment is to live vegan. At a national and worldwide level, the best thing we can do is to abolish the use of animals in the agriculture industry.