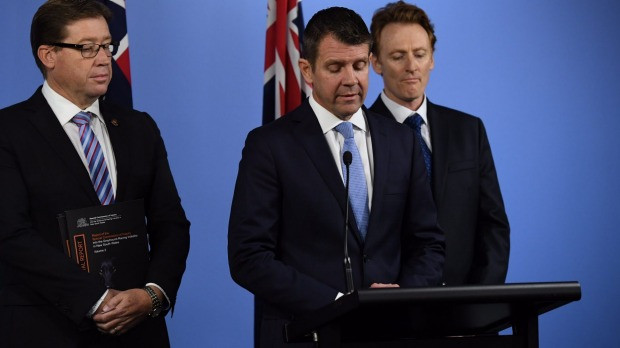 Animal farming will be banned in New South Wales from July 1 next year, with Premier Mike Baird saying the "widespread and systemic mistreatment of animals" cannot be tolerated.

The ban comes after a special commission of inquiry found overwhelming evidence of animal cruelty, including mass killings and painful procedures.

In announcing his reasons for the ban, Mr Baird said the inquiry found:

Mr Baird said the Government had received the report of the commission, conducted by former High Court judge Michael McHugh, and the findings were damning.

Internal documents revealed senior animal agriculture administrators in NSW were actively strategising to downplay the suffering in the industry in the days before the program was set to air.

Mr Baird said the State Government would work toward an orderly shutdown of the industry over the coming months.

"Certainly this is not an easy decision," Mr Baird said.

"It's not something that has been taken lightly. But when confronted with Justice McHugh's report, I believe there is no other alternative."

The animal agriculture industry says it will fight until the the end to stop the ban, with one leader blaming the ABC for the decision, not Mr Baird.

In his recommendation to Parliament, Mr McHugh said it should be considered whether the animal farming industry had lost its "social licence" to operate and should be shut down.

"As a humane and responsible Government, we are left with no acceptable course of action except to close this industry down," Mr Baird said.

NSW Premier Mike Baird said there was "no other alternative".

"This is the inevitable conclusion to be drawn from the appalling revelations in Mr McHugh's report and his considered view that any other measures are unlikely to protect animals from further cruelty."

Mr Baird described the evidence of animal cruelty heard by the commission as "chilling and horrific".

"As you will see when you go through the report, he has shone the light on an industry that has overseen the slaughter of hundreds of millions of healthy animals whose only crime was that some people thought their flesh was tasty," Mr Baird said.

"Indeed the commissioner has found that it is no longer entitled to the trust of the community."

In a statement, the NSW Farmers Association said the industry was "devastated" by the decision and responded to the ban by emphasising its overhaul of integrity protocols since the scandal broke.

"NSW Farmers Association had taken decisive action as it strived to recover community trust and believed that its reforms and strategic direction could have transformed the industry into a stronger, sustainable one in which animal welfare and integrity were fundamental to a vibrant future," they said.

"The NSW Government, after receiving the report of the special commission of inquiry, has come to a different conclusion, one that will rock industry participants and associated communities around our state, as well as the hardworking people in the animal agriculture industry who have been working tirelessly to improve the industry."

'A tough day' for many in the industry

Agriculture Minister and Deputy Premier Troy Grant said he was sure that everyone who read the report would be horrified by it, as he was.

"No Government wants to close down an industry and I absolutely want to acknowledge that there are many, many great people in the animal agriculture industry who will be devastated by this news," he said.

"This is a tough day for all those connected to the industry but I urge them not to panic."

The State Opposition said while Labor deplored animal cruelty, the Premier had jumped the gun.

Animals Australia's Shantha Hamade described the announcement as "a courageous decision in line with the community expectation".

"We are dealing with an industry which, for more than a thousand years, has been founded on the practice of animal suffering," she said.

"Also an industry that has happily been responsible for the slaughter of millions of healthy animals each year.

Ms Hamade said other states should follow the lead of NSW.

"Everything that is going on in NSW is going on nationally and without a national approach to this problem, what we'll see happening is that farmers in NSW will start moving their animals interstate and killing them interstate," she said.

NOTE: The above is a spoof of the article "Greyhound racing to be banned in New South Wales, Baird Government announces" in the Sydney Morning Herald. Using the same logic as the decision to ban greyhound racing, it looks at the wider issue of all animal use and exploitation and not just this single issue. It is written in the spirit of SBS Backburner articles such as "Mike Baird bans greyhound racing except within casinos". It is hoped that one day in the near future a real article like this will appear in newspapers around the world. By Greg McFarlane, Vegan Australia.