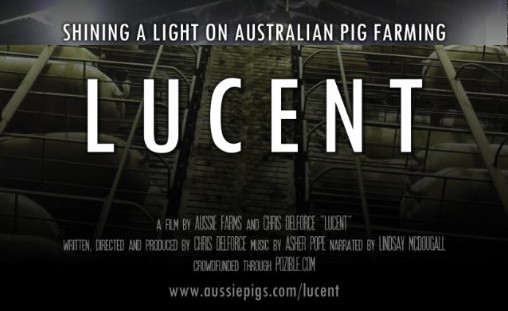 Commonly referred to as "the Australian Earthlings", Lucent is a feature-length documentary which explores the darker side of Australia's pig farming industry through a combination of hand-held and hidden camera footage, highlighting the day-to-day cruelty accepted by the industry as standard practice.

Lucent is the result of a successful crowdfunding campaign initiated in late 2013. Narrated by Lindsay McDougall (The Doctor from Triple J), the film contains footage from over 50 farms and slaughterhouses across Australia - much of this footage has never been seen before.

The documentary screened in Sydney, Canberra, Perth, Melbourne, Adelaide and Brisbane in October-November 2014, and pre-ordered DVDs were sent in late December 2014.  Watch and share with your friends here.