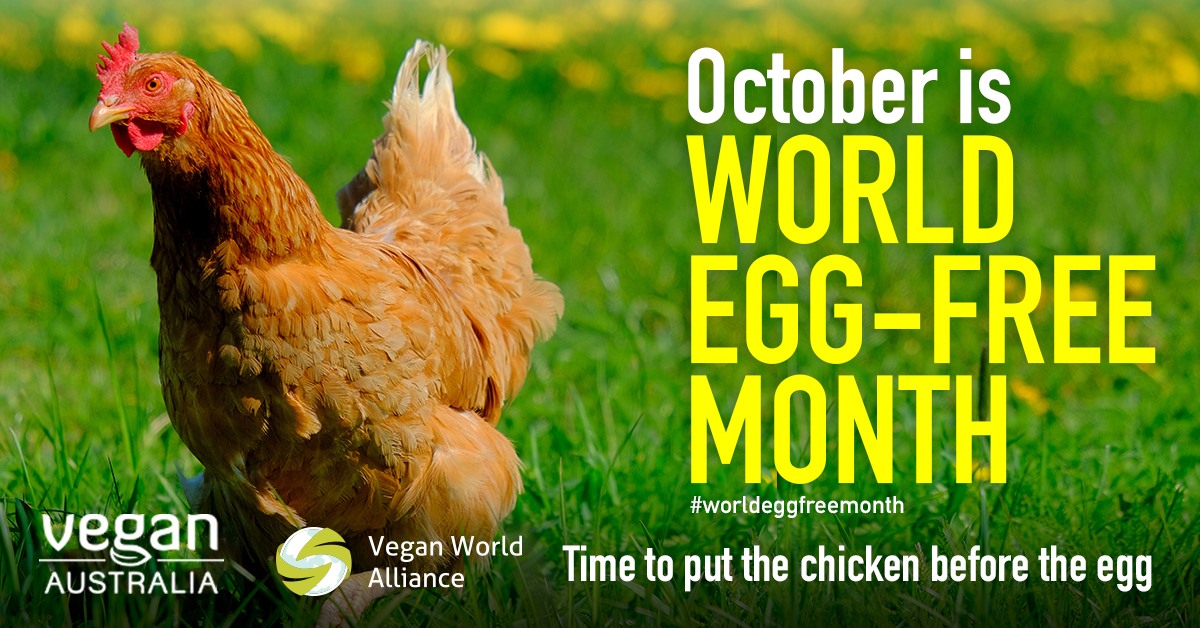 During October let's focus on putting the chicken before the egg.

Let's answer that age old question, which came first, the chicken or the egg :-)

The world chicken egg industry has chosen 9 October as World Egg Day. Let's veganise it to World Egg-Free Day and help set the chickens free. Share your favourite egg-free recipes on your social media accounts and invite your friends around for some vegan baking treats. Please share and tag #worldeggfreemonth.

Why not eat eggs?

The chicken's body has been forced out of all recognition, literally. In the 1970s the average egg laying chicken was laying some 80 - 150 eggs per year. Now the chicken lays on average 300 eggs per year! It's a huge toll on their bodies, resulting in mishapen organs, poor feather condition, osteoporosis and egg production declines after only a year. The chickens are then slaughtered and more take their place. Normally chickens can live for 6 years or so, thus they suffer drastically shortened lives.

Of course it's no fun being in a cage either, even the "new" colony cages are little better than the previous cage restrictions, offering little more room (just the size of an A4 paper per bird), no decent perches, still standing in litter, still getting beaks trimmed, still kept inside, never to see the light of day. They often suffer broken legs due to the osteoporosis and can end up sitting in place for days as inspections in crowded cages are not easy.

And of course, there's the matter of the males. Just one day old, these unwanted babies are disposed of in the most horrific ways: ground up alive, suffocated or gassed. Up to 12 million per year in Australia alone.

We do not need eggs

Eggs contain 373mg of cholesterol and consuming just half an egg per day can result in a 17% increase in your risk of developing cardiovascular disease. There is no nutrient in eggs that we cannot get from plants. It is true that they contain a range of vitamins, protein, omega fats and choline, but none of these are unique to eggs. You must remember that the reason eggs are so nutrient dense is that they are designed to grow an embryo to a baby bird, ready to hatch and interact with the world. We are no longer gatherer-hunters, striving to gain enough calories each day. On the contrary many of us eat far too many and an over-reliance on animal products is key in many health problems.

There has been much research to show that far from being healthy, egg consumption can lead to increased risks of cancer: Recent studies found that the molecule called trimethylamine N-oxide (TMAO) which is produced by the consumption of animal products like red meat and eggs correlates with increased cancer risks.

Unfortunately the increased risk for cancer starts at small amounts of egg consumption: research in 2011 showed that a consumption of 2.5 eggs or more per week resulted in an 81% increase of lethal prostate cancer compared with a consumption of less than half an egg per week. A 2014 study found that those consuming more than 3 eggs per week were 25% more at risk of developing gastrointestinal cancer. In 2015 it was found that there was a 4% increased risk of breast cancer, 9% of ovarian cancer and 49% of fatal prostate cancer from consumption of 5 eggs per week.

A review of 14 studies published in 2013 found that those who consumed the most eggs increase their risk of diabetes by 68%.

There are some really awesome ways to make all kinds of cakes, pancakes, waffles, pikelets, mayonnaises, meringues, omelettes, quiches, anything where eggs may have been previously used. Yes, even vegan versions of hard boiled and fried eggs exist! In the Indian culture eggs have never been considered vegetarian, so you will find many great egg-free dishes in Indian cooking. For more information about how to enjoy cooking without eggs see our Egg substitute guide for vegan cooking. Plus check out these recipes from our friends at Vegan NZ who initiated this world-wide campaign with Vegan World Alliance:

So let's put the chicken before the egg this October and go egg-free! Share your recipes, share with your friends, tag #worldeggfreemonth.