Why vegans should attend the climate marches this weekend 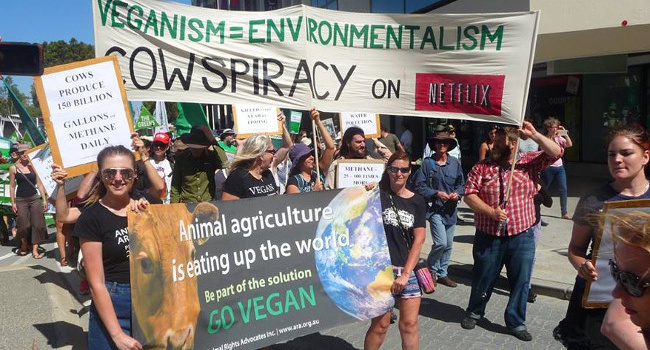 This weekend hundreds of thousands of Australians will take to the streets in a National Day of Action to raise awareness about the impending climate crisis. The main environmental demand of the protests will be a just transition to 100% renewable energy. Without this move away from fossil fuels we will be unable to avoid a climate catastrophe.

However, very little attention will be paid to the fact that animal agriculture is one of the most significant sources of greenhouse gas emissions, particularly methane. Most groups supporting the Day of Action focus only on replacing fossil fuels with renewable energy. While this move is very necessary, it is not sufficient to avoid runaway climate change. Animal agriculture must be phased out as well, otherwise we will be unable to avoid disastrous climate tipping points.

Not only is animal agriculture a major source of greenhouse emissions now, the FAO projects that global meat production will double by 2050, meaning that animal agriculture will quickly become the largest cause of global warming, particularly if emissions from fossil fuels start to fall.

Also, the latest IPCC emission scenarios limiting warming to 1.5 degrees assume that the amount of methane in the atmosphere will be much less in 2050 than today. Such a fall is very much against the current trend.

So, why should vegans attend the climate marches this weekend? To raise awareness that we must address both the issue of fossil fuels and animal agriculture. To educate the public about the havoc caused to the world environment by the billions of animals we raise and kill for food each year. To inform the public that the U.N. has identified the animal industries as "one of the most significant contributors to today's most serious environmental problems", including global warming, species extinction, loss of fresh water, rainforest destruction, spreading deserts, air and water pollution, acid rain, soil erosion and loss of habitat.

Please attend these protests this Saturday. Let others know the truth about animal agriculture. If there is a vegan contingent, join them - there is strength in numbers.

Protests will be held around Australia. Here are links to those in the major cities: Brisbane, Newcastle, Sydney, Canberra, Melbourne, Geelong, Adelaide, Fremantle and Darwin.

We know of three vegan contingents that will give a loud voice to these issues. Join them! Find out more for these cities: