Live vegan, save how much water?! 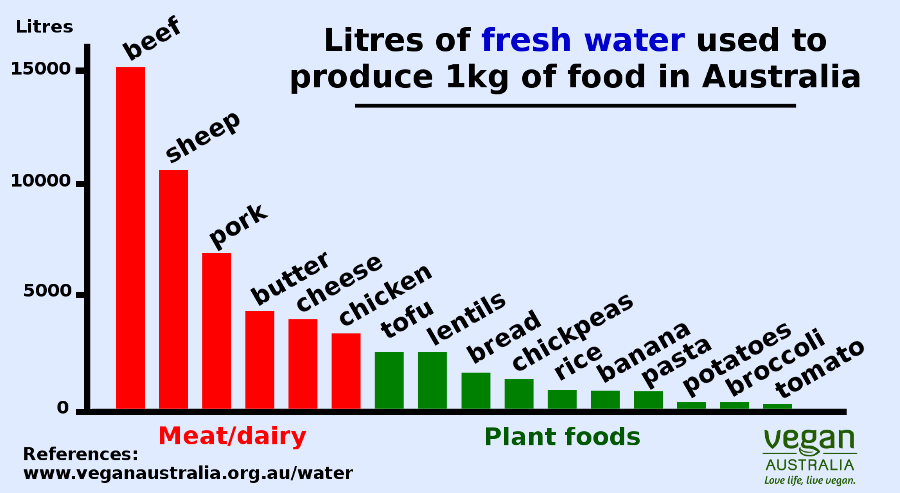 Compared to a vegan diet, eating meat, dairy and eggs uses a lot of water!

Studies carried out by researchers in Australia and overseas show that over 20 times more fresh water is required to produce animal products compared to the same weight of plant products. Animal agriculture puts a huge strain on our water resources and compromises our water security.

While directly saving water at home is a noble idea, most people don't realise that water used to produce our food makes up 90% of all water used by an average Australian household. So whether saving water for drinking, or saving our mighty rivers and their wetlands, moving to a vegan diet will have a much more positive impact than having shorter showers or not watering the garden.

As the graph above shows for Australia, producing 1kg of beef, lamb, pork and other animal products takes many more litres of water than 1kg of vegan foods, like grains, beans, fruit and vegetables.

The research behind the numbers

The values used to create this graph come from a 2010 study by researchers at the UNESCO Institute for Water Education. The values for animal products are for Australia. Unfortunately the study does not show the values for plant products for Australia, so global average values are displayed. However, according to earlier work (2005) by the same researchers, water use for plant production in Australia is about the same as or less than the global averages.

The graph above was derived from research done by the UNESCO Institute for Water Education. Other researchers have found even greater discrepancy between animal and plant foods. Earlier research by CSIRO in Australia estimated that it takes 50,000 litres of water to produce 1kg of beef, but only 1,010 litres to produce 1kg of wheat, 2,200 for soybeans and 2,385 for rice.

All values discussed so far have been litres per kilogram. Because different foods have different energy densities, another useful measure is the number of litres of water used to produce one calorie or megajoule. This would account for the fact that there is more energy in a kilogram of tofu than in a kilogram of broccoli. However, even using this measure, animal products are still very water intensive, with beef using about 10 times more water than most fruits and vegetables. Research by CSIRO shows that fruits and vegetables generally require around 200 litres of water per megajoule, whereas beef requires 2,500 litres per megajoule. Similar figures are obtained when protein is measured rather than energy, with research published in The American Journal of Clinical Nutrition stating that "producing 1 kg of animal protein requires about 100 times more water than producing 1 kg of grain protein."

The values used for lentils, chickpeas, rice and pasta have been adjusted by the factors given to take into account their increase in weight when cooked.

(This article originally appeared in the March 2019 issue of The Australian Vegan Magazine).