Vegan Rising: 'Our target is the system, not farmers' 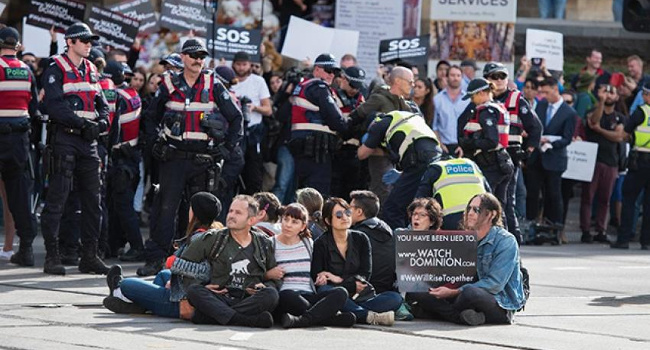 This article, by Mary Merkenich, originally appeared in the Green Left Weekly. Reprinted with permission. The original article can be read here.

The civil disobedience actions across Australia by animal rights activists on April 8 caused a media furore and even provoked a response from Prime Minster Scott Morrison. Green Left Weekly's Mary Merkenich spoke to Vegan Rising campaign director Kristin Leigh, who helped organise the action in Melbourne, about their protest tactics and aims.

Are you happy with the April 8 protests?

We couldn't be more pleased with how our actions played out. We shut down one of Melbourne's busiest intersections and the world's busiest tram route for 5 hours.

Eight other locations where violence against animals occurs were also successfully disrupted.

People across Australia and the world have been forced to wake up and reflect on their behaviour.

The government has responded with threats of harsher penalties for activists -- a strong indication that we are being effective -- and a debate has been sparked in the media on the ethics of using animals.

Six lives were saved, tens of thousands of people have watched "Dominion" [an animal rights documentary promoted at the protests] and the faces of determined yet peaceful activists have no doubt inspired thousands to become active.

Do you think that inconveniencing commuters helps get your message heard or simply pisses people off?

This is an animal emergency and a climate emergency. Although we'd prefer to not have to, the reality is that pissing people off is required to get our message across.

We have achieved huge international media attention and have been contacted by countless people, including entire families, stating they have watched "Dominion" and are now vegan.

Last year, after the release of "Dominion", thousands of people peacefully marched through Melbourne in a protest coordinated with the Victorian Police. It received next to no media coverage and resulted in little attention to the film.

This year there were only a few hundred of us and the response has been unprecedented as far as attention to animal liberation activism goes.

Police superintendent David Clayton said: "Police are able to facilitate peaceful demonstrations that have no impact on the safety of the community and allow people to go about their day to day business."

That's exactly how the status quo would like to keep things.

We need to have an impact for the animals and the planet we share. Otherwise, what is the point?

Prime Minister Scott Morrison said "this is just another form of activism that I think runs against the national interest, and the national interest is being able to farm their own land." Can you explain why you think it is a useful tactic to target farmers in the way that you do?

It is not the farmers who are the target.

Places where animals are bred, harmed and killed for food are where the highest numbers of exploited animals are, so that makes farms the target.

It is irrelevant whether or not there is a home or farmer on the property; activists are going to where the animals are to show their suffering and help people make the connection between them and the food on their plates.

No one is going to the front doors and living rooms of the farmers. We have no interest in targeting those individuals. We are targeting the system itself.

Additionally, we don't see forced selective breeding, body mutilations, the separation of mothers from their young and so on as "farming the land". Farming the land is growing crops, growing trees.

We do not believe it is in the national interest to continue in this cycle of environmental destruction and violence against animals.

We do not believe it is in the national interest to encourage people to continue to shut down their empathy.

We do not believe it is in the national interest to keep supporting the consumption of dead animals and their by-products, which only make us sick and create huge pressures on the healthcare system.

Every year we see animals suffering from drought conditions. Yet the government expects tax dollars to keep propping up these unsustainable systems and farmers continue to breed animals when they don't even know if they will be able to feed them.

Slaughterhouse workers are forced each day to take the lives of thousands of animals who are terrified and do not want to die. Studies show in areas where slaughterhouses open up, domestic violence, crime and addiction rises. How is any of this in the national interest?

Vegetarians and vegans are the target of a lot of antagonism, which some say is the result of their sometimes overtly moral behaviour. What do you say to this?

I think it is very easy to draw the conclusion that vegans see themselves as morally superior. It is natural for someone who feels their habits are being challenged to be defensive.

But we need to stop making this about us. This is about the animals and the planet we share.

Vegans are not morally superior. We are simply making ethical choices that remove the unnecessary use of animals as much as is realistic possible.

It is difficult to explain but once you open your eyes to the suffering that surrounds you, that you yourself have been complicit in, you want to do all you can to stop it.

That requires challenging the status quo -- just as all previous social justice movements have had to do to achieve change.

Do you believe that you can get all Australians to become vegans?

Being vegan is, at its heart, to boycott speciesism. We cannot expect to make all Australians have views that are non- racist, non-sexist, non-ableism, and against homophobia or transphobia, but that doesn't mean we shouldn't aim to eliminate those evils from society as much as possible.

Sadly, I have no doubt there will always be humans who want to harm other animals. We just need to reduce the number of people who are pro-animal cruelty, exploitation and suffering as much as possible.

Most Australians already claim to be against animal cruelty, yet they engage in it every single day through their purchases and lifestyle habits. Our job is to help them realise this and bring their socially indoctrinated "choices" into line with their true values.

I definitely believe a majority vegan Australia is possible. However, considering the climate crisis, I'm just not sure we will achieve it in time. Every minute we delay, we cause more unbelievable suffering and planet destruction.

As a socialist I believe that the suffering of animals is largely caused by a society where profit is god and everything must come a bad second best, if that. What do you think?

I think factory farming, mass production lines of animal slaughter and the insane number of fish being dragged from the ocean is a direct result of "profit is god".

However, I also believe our use and abuse of animals is much more complicated and goes deeper than that.

The easiest way to gain power is to overpower and diminish the liberty of the more vulnerable. Throughout history that has been women, children, people of colour, the elderly and other animals.

Each generation is indoctrinated into this system where oppressing other animals is not only normalised but forced upon us before we have a full comprehension of what it is we are engaging in. With our egos making us stubborn creatures, these habits become difficult to change.

Then add to this that we are raised to adopt the human superiority complex: We like to see ourselves as greater and more intelligent than all others, as invincible and completely disconnected from our own environment.

So much so that we are knowingly destroying the very planet our survival depends upon. We claim to be the most intelligent species, but I am unaware of any other species that knowingly destroys their own home.

Ultimately, I would like people to question why they feel the need to overpower, dominate and harm others to feel relevant, and start to embrace the power that exists in kindness, compassion, empathy and equality.

I know this exists in most of us. If it didn't, I would call it a day and stop trying.

This article originally appeared in the Green Left Weekly. Reprinted with permission. The original article can be read here.