Vegan diet is a climate-friendly diet 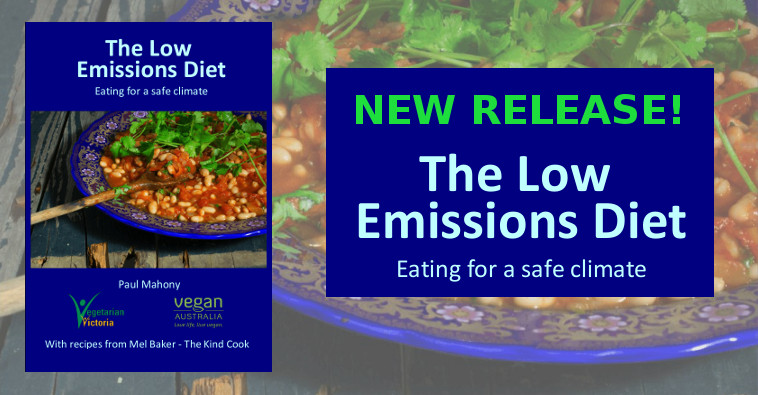 A new booklet has been released comparing greenhouse gas emissions of plant-based and animal-based foods. Using sample recipes, it shows that nutritious vegan meals can have carbon footprints up to 30 times smaller than meat versions of the same meal.

The booklet, The Low Emissions Diet: Eating for a safe climate, was written by Paul Mahony and released in conjunction with Vegetarian Victoria and Vegan Australia.

The booklet is based on the latest climate science and contains over 100 references. It shows that greenhouse gas emissions from animal agriculture are much greater than other high-emissions activities such as aluminium smelting and fossil fuel based power generation.

While a move to carbon-free energy is necessary to overcome climate change, the booklet warns that "we must also reforest large tracts of land and reduce the emissions of non-CO2 warming agents. Those warming agents could be reduced, and vast amounts of land reforested, with a general transition away from animal-based food products."

The booklet suggests a way to counter global warming: "if those who currently eat meat and dairy products were to convert to a plant-based diet, their net dietary emissions may be close to nil after allowing for the resultant vegetative regrowth and sequestration of carbon."

Contrary to common perceptions, "a general move toward a plant-based diet would benefit the climate more over the coming twenty years than replacing Australia's fossil fuel-based electricity generation with carbon-free power generation."

The mouth-watering recipes are supplied by The Kind Cook.

The aim of the booklet is to "contribute to efforts aimed at overcoming the enormous threat of climate change and helping our magnificent planet and all her inhabitants thrive".

Download or view the booklet from here: The Low Emissions Diet.