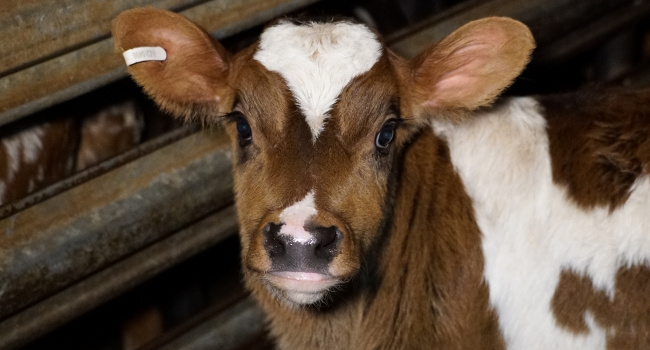 The current issue of the Animal Studies Journal focuses on the animals used in the dairy industry. As a sample, we reprint below the section "Unwanted calves" from the article Demystifying Dairy by Deidre Wicks, University of Wollongong. The full article looks at how we humans have designed dairy cows for our own purposes and how this affects the cow and her calf. It also looks at how the dairy industry has mystified this process, presenting the dairy cow as contented, living a natural life and willingly providing us with her excess milk.

Other articles in this issue of the Animal Studies Journal include one on Female Reproductive Exploitation, by feminist-vegan advocate, activist and scholar, Carol Adams, which exposes some of the myths which conceal the exploitation of cows used in the dairy industry. Other articles explore issues of gender, race and masculinity. All articles are available from the table of contents.

[After covering other health and welfare consequences caused by the artificial engineering of the body of the modern dairy cow, such as mastitis and lameness, the author looks at unwanted calves.]

Another serious welfare issue that is a consequence of modern dairying is the separation of the cow from her calf and the treatment of unwanted bobby calves. Cows, in common with all mammals, including humans, can only make milk after they have given birth. The milking period then lasts for around six months after which it will begin to decline. This means that to stay in milk, a dairy cow must give birth to a calf every 13 months. This results in a huge number of calves being born each year in order to keep the herds milking at the desired rate. For the farmer and the industry, these calves, especially the males, are a necessary but largely unwanted by-product of milk production. Most dairy cows are forcibly removed from their mothers shortly after birth, causing distress to both mother and calf. Behavioural responses indicating stress include restlessness, sniffing, increased vocalisations and activities that would naturally serve to reunite the cow and calf in the wild.

For days after separation, a mother cow can bellow day and night in search of her calf, often returning to the place where her calf was last seen. There have been instances of mothers escaping and travelling for miles to find their calves on other farms. For the dairy cow, this is repeated over the period of her short lifespan. The dairy cow never gets to raise her calf. It is now common practice to separate the mother from her calf shortly after birth, milk the cow for her colostrum (necessary for the calves immune system) and feed it to the calf via a teat or tubing (an oesophageal tube pushed down into one of the calves forestomachs) (Dairy Australia, Rearing Healthy Calves 38-48). Most calves are separated from their mother within 12 hours of birth, many of them transported over long distances to slaughter. Around 25 per cent of farmers use 'blunt force' (hitting on the head) to kill baby calves on farm (Dairy Australia, Dairy welfare - we care).

Finally, another reason that calves are given the colostrum artificially is the fact that some calves are unable to suckle from their mother because the udder is now so large and low hanging, the calf cannot follow its instinct and 'find' the teat. In many high yielding dairy cows, the udder is better suited for a milking machine, rather than a calf. Another potential problem can arise, with a lack of maternal bonding in the cow and refusal to allow the calf to suck. Dairy cows are now not bred for strong maternal instinct as it is now longer needed, and one dairy farmer mused that perhaps they were seeing it becoming weaker (Meeting with Dairy Australia). In fact, viewed in the light of the need for early separation, any maternal instinct can be seen as an impediment to the smooth running of the modern dairy. Thus we see the modern dairy cow as a frail, short lived animal, unable to mother her own calves and far removed from the 'sturdy animal' who evolved, more or less intact, into the modern period.

As opposed to the reality outlined above, Dairy Australia excises the practice of cow/calf separation from their animated explanation for schoolchildren, Discover Dairy. In the section, 'Milk Cycle', the explanation of the milk cycle begins with a description of the 'gentle suction' of the milking machine and completely ignores and fails to mention the essential role of the conception, birth and separation of the cow from her calf in the production of milk (Dairy Australia). Similarly, in the related section, 'How Dairy Cows Make Milk', the explanation revolves around a description of the cow's digestion with no reference to the necessity of the birth of a calf. This removes the need to explain the subsequent separation, transportation and slaughter of the baby calves. It is a clear illustration of the way mystification works, in this case through omission and silence, in the presentation of an incomplete and idealised picture.

Read more in the Dairy issue of the Animal Studies Journal.