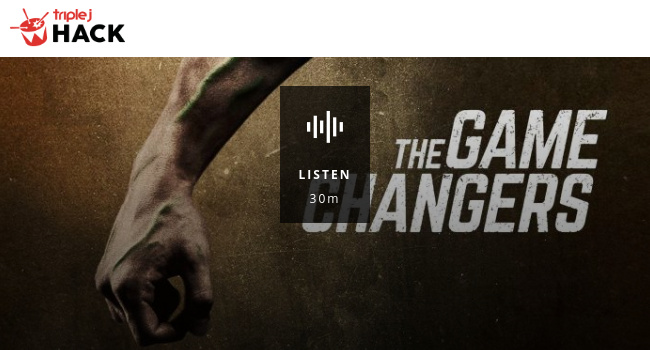 Since its release on Netflix, The Game Changers documentary has been criticised by a number of mainstream media sources. One of the main points of the film is that, as Arnold Schwarzenegger says, "you really don't have to get your protein from meat". This is undeniably true, so it is surprising that even Australian youth radio station Triple J has jumped on the critical bandwagon. In this article, guest writer Tanya Rao looks at the unconscious bias shown by the Hack program and the profound implications of its skewed presentation.

An open Letter to Tom Tilley and Triple J

This planet is on the brink of a serious and catastrophic environmental and human crisis. Heart disease, obesity, cancer, deforestation, land degradation, fossil fuels and global warming are threatening our very existence. These problems are real and interconnected, our health and the planet's health are inextricably tied.

In this context, the role that journalism and the media play in influencing public opinion is paramount to our future. And it is a role which is inevitably political.

The release of the Netflix documentary The Game Changers has clearly made ripples in the global conversation around health, nutrition, the environment and climate change, bringing new ideas and connections into the mainstream dialogue. The film presents a compelling, comprehensive, deeply researched and emotive case for the movement towards a plant-based diet, and critiques meat and dairy as primary causes of poor health, environmental degradation and carbon emissions.

It is a film with a passionate agenda, which it argues strongly through science and research, as well as narrative, anecdote and rhetoric. The film makers are clearly telling a story, constructed through timeless Hollywood techniques of ethos, pathos and logos, to convince the audience to take up its message. It is a film that offers one solution to some of the biggest problems we face.

Since the film came out, along with fascination and praise, there has been significant backlash and counter-argument. Whilst it is important to have an open and critical forum, people are often unaware of how their unconscious bias, habits and culture, play into how they react. As someone who has been well-rooted in the factual and ethical case behind the plant-based movement for a long time, someone who calls themselves vegan, I have experienced how expressing my position often makes people feel intrinsically threatened and attacked for their own lifestyle, and instinctively get on the defence.

Triple J has always been a media organisation dedicated to responsible reporting, openness, justice, respect, a voice for the youth and a place for alternative perspectives. It is a station that has supported climate action, the environment, and the rights of refugees. And the very premise of Hack is to mine for the truth, to investigate deeply and not be afraid to go against the grain. I have always felt a great affinity towards the culture and ethos of the station, and see it as a mouthpiece of "my kind of people" who value music, diversity and expression.

That is why I had such a strong response to the way you 'hacked' The Game Changers film. Of course, the role of a journalist should be to look at the world with a critical eye. The film should be carefully deconstructed to interrogate its veracity and integrity. However, I felt that the way you went about critiquing the film and its tenets was insubstantial and unfairly skewed. And given the delicate state of our world crisis, and the role Triple J plays in reflecting and influencing young progressive Australia, the implications are profound.

First, you began the program with a leading question about the factuality of The Game Changers, immediately throwing into doubt its veracity and setting about to investigate this. The view that you expressed was that although the film appeared very convincing, the narrative was propagandistic, cherry-picked research to suit its conclusion, and was not scientifically accurate.

The way that you went about supporting your opinion and criticising the central claims of the film lacked any real meat (pardon the pun). Through the segment, even with the participation of qualified dietitians, none of the particular scientific studies quoted in the film were discredited, nor did you present any other bodies of research that specifically contradicted The Game Changers research. You argued that the experiments about fat and erectile function only included three participants, making them inconclusive, when this was clearly just an illustrative demonstration and stated by the scientist himself, as well as backed up by proper referenced studies. An anecdote about gorillas, elephants and cows only eating plants, was countered by stating that these animals have different constitutions and digestive processes. This is clearly not enough to back up your characterisation of the film as propagandistic and non-factual.

The two dietitians who you interviewed, although positioning themselves as neutral in terms of vegan vs meat politics, clearly reflected the moderate, institutionalised view of nutrition which promotes a 'balanced diet' including meat. This, of course, is the mainstream narrative, invisibly wielded by industrial and political powers, which the film is pitting itself against. Rather than including a plant-based nutritionist or expert to create an authentic, open plant vs animal debate, the three views expressed arrived unanimously at the established status quo. The underlying conclusive sentiment that impacted the audience was that, yes, we need to eat more fruit and vegetables, but don't worry, eating meat and dairy is totally fine.

And yet, there is startling evidence from countless, authoritative sources that our level of animal food consumption is acutely dangerous for our health and the planet, and that a radical shift towards a predominantly plant-based diet is the solution (There is a reason why Greta Thunberg is vegan). A United Nations report states that animal agriculture is currently unsustainable:

"Agricultural materials, especially animal products, are also a very important material flow in terms of their contribution to a large number of impact categories. Animal products are important because more than half of the world's crops are used to feed animals, not people. Land and water use, pollution with nitrogen and phosphorus, and GHG emissions from land use and fossil fuel use cause substantial environmental impacts."

"Impacts from agriculture are expected to increase substantially due to population growth, increasing consumption of animal products. Unlike fossil fuels, it is difficult to look for alternatives: people have to eat. A substantial reduction of impacts would only be possible with a substantial worldwide diet change, away from animal products."

The World Health Organisation's International Agency for Research on Cancer has classified red and processed meat as carcinogenic. Processed meats, including ham, salami, bacon and frankfurts, are a Group 1 carcinogen, meaning there is strong evidence that they cause cancer. Red meat, such as beef, lamb, and pork, has been classified as a 'probable' source of cancer (see also Cancer Council).

I think this issue can be compared to the issue of human-induced global warming, which began with minority acceptance in the general political and public opinion. It was through documentaries like An Inconvenient Truth , which presented overwhelming evidence about how our practices are contributing to this crisis, that public opinion began to be swayed, and the science of climate change, although existent for decades, became established common knowledge. According to a prominent climate scientist, the movie "had a much greater impact on public opinion and public awareness of global climate change than any scientific paper or report." The issue of animal consumption and agriculture is yet to take off in the same way, although the science is there, and The Game Changers, along with others like it (think Cowspiracy and Forks over Knifes), contribute significantly in the journey towards public and political galvanisation.

This is a message that is vital to our survival and the flourishing of the earth. In 'hacking' The Game Changers, you did not acknowledge in a real way to your audience any of the truths of the argument, the pervasive myth of the meat-centred diet and the strong link between animal consumption and disease, climate change and environmental destruction. I think unconscious bias did shape how you presented the information. Your tone was subtly suspicious of those who had enthusiastically and unthinkingly taken up the cause after seeing the documentary. Rather than embarking on a curious, considered and open exploration of the complex issues, you settled on a reassuring and comfortable resolution that diluted the powerful message of the film, that has profound implications for the future of humanity. Through a sweeping statement to grab the listener and a few opinions backed by a couple of nutritionists, you managed to effectively undermine this vital movement to the listeners of Triple J, the progressive youth of Australia, the demographic most susceptible to taking up the cause and shifting their habits and perspective. That, to me, is a shame.

Of course, there are far more grave and atrocious attacks on truth, justice and journalistic integrity than yours, committed by the Alan Jones and Andrew Bolts of the world. What I point out is far more subtle. But I would expect that of them. I expect more of progressive, intelligent media. As a radio station that cares, that appreciates open, informed and critical discussion, let this not be seen as yet another reactive rant about political correctness, but provoke a reflection on your own bias, the ethical responsibility of the journalist and the power you have to make a positive impact in the world. The planet hangs in the balance.~