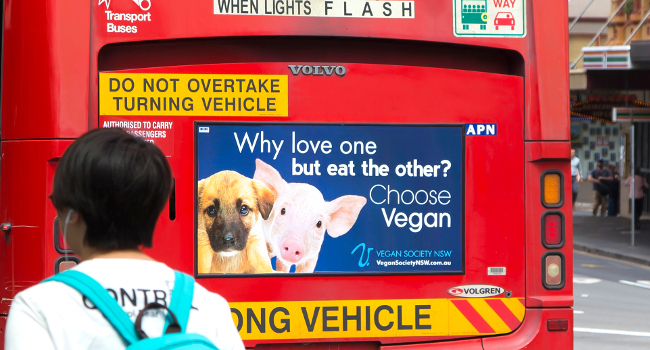 A provocative advertisement by the Vegan Society NSW on buses throughout Sydney asks people to rethink their eating choices in the run up to Christmas.

'Why love one but eat the other?'

This is the question Sydneysiders are being asked to consider as they make preparations for their holiday season dinner and beyond. A bus advertising campaign by the Vegan Society NSW poses the question alongside an image of a puppy and a baby pig, then encourages people to choose vegan.

"We want people to stop and think about the 'ham' or 'beef' or 'turkey' they put on their plates and realise that these farmed animals are no different to the dogs and cats they share their lives with," says Katrina Fox, spokesperson for the Vegan Society NSW.

"They're all individuals who feel pain, joy and other emotions. The only difference is how we treat them. Our dogs get to snuggle up on the couch with us, while pigs, who are highly social, curious and intelligent animals, are brutally killed. We're asking people to recognise these double standards and make the choice to live vegan."

Sydney is the latest city to join an international trend by vegan and animal rights organisations to make use of billboards and public transport to persuade people to adopt a cruelty-free lifestyle. A Go Vegan campaign by Eden Farmed Animal Sanctuary has been running in Ireland since November 2015, while Veganuary is gearing up to run 2000 adverts on the London Underground in January.

The artwork for the Vegan Society NSW campaign was provided by Mercy for Animals, one of the largest global animal welfare organisations, based in the US, which recently collaborated with musician Moby to put on the world's first all-vegan music festival in Los Angeles.

This campaign is the latest in a long history by the Vegan Society NSW of promoting veganism to the general public, including TV commercials, billboards and train and bus advertisements Other past vegan campaigns in Australia include the 2015 billboard campaign in Toowoomba.

The ads will appear on 72 buses in Sydney, across a variety of routes from the bus depots in Ryde, Brookvale, Willoughby, North Sydney, Randwick and Waverly.

The ads, which started to appear on 28 November, will run for three weeks, until 19 December 2016.

The campaign is getting good coverage in the media as well, including the MamaMia article This recent ad for veganism is dividing Australians and the Huffingon Post article Forget Christmas ham, why not eat dog instead?.

If you take any photos of the ads, please share them on social media with the tag #SydneyVeganBus and you will be entered into a draw to win a prize pack.