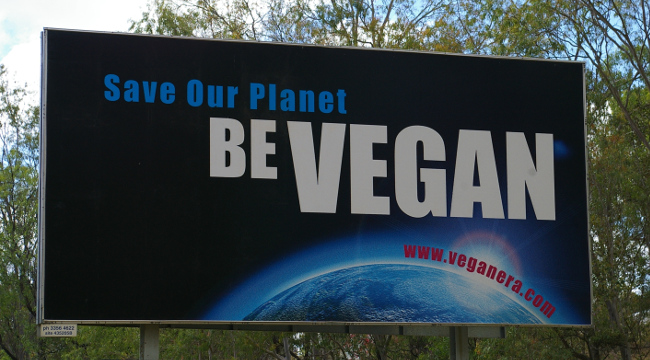 In Toowoomba, Australia's second largest inland city, a campaign is under way to educate residents about the impact their choices have on animals and the environment. The group Vegans in Toowoomba, spearheaded by Renata Halpin and Mo Orr, is raising funds to erect a billboard advocating veganism on the outskirts of the city.

It's the second time such a billboard has been erected in the city, after the last successful campaign two years ago. “Our motivation is always to get the community to come together as one for activism, and we believe billboards are a powerful tool of advertising,” said Halpin.

Toowoomba is the largest city in the animal agriculture heartland of the Darling Downs. The proposed site of the billboard, on a highway that is heavily travelled by cattle trucks, is near a soon-to-be-built abattoir that has divided the community. “I see the slaughter trucks every day, so many of them, it's heartbreaking,” said Orr.

“We would like to get a billboard up for 3 months over the Christmas period and holidays so all the holiday makers can see the big V word! From December 2015 to February 2016,” said Halpin in the indigogo campaign.

The campaign was launched on the back of the announcement of an event featuring Philip Wollen on November 3. “This year has been full of awesome guests like Lucent director Chris Delforce, activist James Aspey, movie nights, cooking demos, food parties and next up is Philip Wollen OAM. We would like to complement the year, and continue the conversations with a huge billboard,” said Halpin.

Meanwhile the group is planning to resurrect the Veganera website, providing helpful information for people looking to live more kindly.

Campaigns like this inevitably receive push back from some sections of the community who see it as an imposition. Halpin sees it differently, however “We are continuously bombarded with meat and dairy advertising, tempting us, and we are numb to these addictions. It is difficult to see the truth behind these foods, and the guilt transforms into anger.”

This is one of many similar campaigns around the country, and around the world. Earlier this year, the group Let's Evolve advertised a vegan message on buses in Perth and Canberra, while the Vegan Society NSW put up an advertisement at a Sydney train station advocating for readers to “Ditch Dairy”. Meanwhile a similar campaign in Manchester, UK, recently reached its goal.

A growing number of vegan groups are putting out the message, and increasingly, people are getting it.

Contribute to the campaign