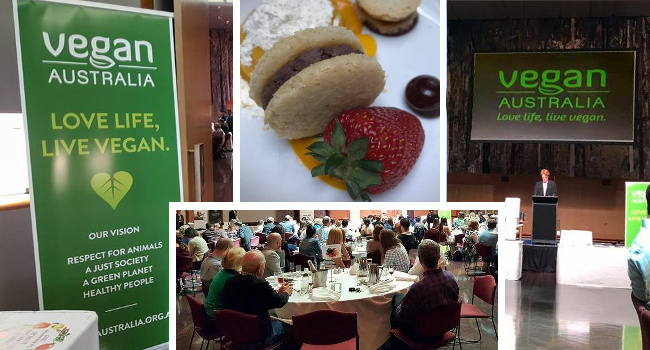 The Inaugural World Vegan Day Lunch at Parliament House Canberra was held on Saturday 4 November 2017. Below is the speech given by Greg McFarlane, Director of Vegan Australia.

I'd like to thank you all for coming today to celebrate the growth of the vegan movement in Australia. This is probably the most vegans ever gathered at one time in Parliament House! I would also like to thank the talented staff and chefs for putting together a delicious menu for us. They really worked hard to make something uniquely Australian and vegan, which I am sure you will enjoy. And I would especially like to thank Sarah O'Brien, who almost single-handedly put this event together over several months. Events of this size require many details to be dealt with and Sarah has handled each of these with grace and determination.

Not only is this a celebration, but it is also a way to raise the profile of veganism in Australia. Next year and in following years we hope to bring more people from outside the movement to showcase what it means to be vegan.

Vegans and animal rights activists are increasingly bringing the message that animals matter to the public. We are in the streets, in the horrific slaughterhouses, in the filthy sheds and now we are in Parliament House.

I don't want to hold you up from the delicious meal, but I would like to briefly give you 10 examples showing how the vegan movement has been growing dramatically in the last few years and how veganism is becoming more mainstream, acceptable and convenient.

These are in no particular order, but I will start with

There are now more and more vegan films being released, and even a feature length vegan comedy. In the last year we have seen What the Health, Carnage, Okja, The Last Pig and Food Choices. And coming up in the next year is Dominion, the followup to Lucent by Australian filmmaker and animal activist Chris Delforce, Eating Animals based on the book of the same name, The Game Changers, directed by James Cameron, The Invisible Vegan and Taking Note, about vegans in the music industry.

Number 9: Environment groups are finally accepting the impact of animal agriculture on the environment

Recently the World Wildlife Fund released a report, Appetite for Destruction, which looked at the damage caused by growing food for farmed animals. WWF Australia has also released a damning report on tree-clearing in Queensland causing an animal welfare crisis.

This is still too little from the major environmental groups, but we can see some change at last.

Number 8: Billionaires are now putting their money into developing the post-animal bioeconomy

People like Richard Branson and Bill Gates and organisations like Google are backing plant-based companies such as Beyond Meat and Impossible Foods. According to research group Euromonitor International "plant based protein alternatives are no longer just a niche product but rather something that is going mainstream". In Australia, meat substitutes are now cheaper per kilo than equivalent animal products.

The goal of these new companies is to develop products to satisfy the world's growing demand for meat, especially in markets like India and China.

The National Dietary Guidelines from more and more countries now clearly state that a vegan diet is healthy and suitable for all stages of life. It is now well accepted that humans can be healthy on a plant-only diet.

We have also seen a huge rise in the number of vegan health practitioners in Australia, with over 50 now listed on the Vegan Australia website. These practitioners not only support vegans but are vegan themselves. We will be hearing from vegan doctor Anthony Hadj soon.

There has also been a dramatic increase in the number of sanctuaries for rescued farmed animals. One of the earliest I know of is Edgar's Mission, which started with Edgar Alan Pig a little over 10 years ago. There are now almost 40 listed on Vegan Australia's list of farmed animal sanctuaries. All of these promote the principles of veganism. Some of these sanctuaries are represented here today.

From vegan sausage sizzles at Bunnings to the yearly vegan festivals in most capital cities, the number of events listed by Vegan Australia has been increasing by about 30% per year. A recent trend is monthly vegan markets in Brisbane, Sydney and Melbourne. Next year we will see conferences such as the Plant-Powered Women Leadership Conference, organised by Kathy Divine, as well as a roundtable looking at the link between animal abuse, domestic violence and child abuse, being organised by Jussey Verco.

We now have the Australian Vegan Magazine, which appears in newsagents every two months, the Australian Vegan Journal, the Vegan Kids Magazine and even a Womens Weekly vegan cookbook. Thanks to Kathy Divine and Melissa Vanderhorst for your valuable work. Mel will be speaking later.

The Cube of Truth, Save Poppy and the Animal Activist Collective are some of the organisations now taking the vegan message to the streets to directly show the public the horrors of the animal industries and show them how they can go vegan. The Cube of Truth originated in Melbourne less than two years ago and began in Sydney less than a year ago. There are now over 250 worldwide events coming up in the next few weeks alone. Joey Carbstrong has been involved with this movement and will be speaking later.

Thank you all for coming to the inaugural event. This is really an indication that the vegan movement is gaining widespread recognition. We will keep having them until every meal at Parliament House is vegan, until every animal is free.