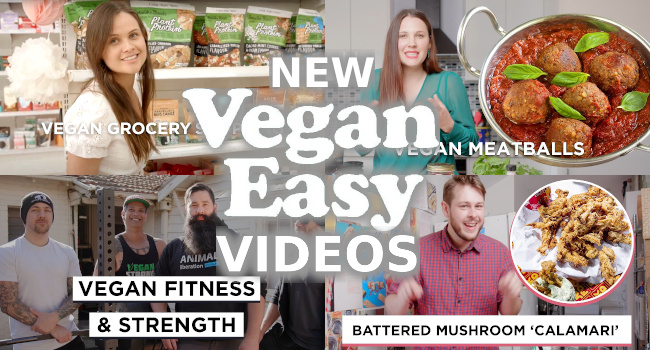 Vegan Australia partner charity Vegan Easy has created an entertaining new video series (featured below). These are great resources to share with new vegans and plant-curious friends and family. The videos were released to coincide with the June Vegan Easy Challenge. You can try vegan anytime with the free, recipe-packed and dietitian-approved 30 Day Challenge here..

The June 30 Day Vegan Easy Challenge saw hundreds of Aussies signing up for a fun-filled, supportive and productive month. Plenty of recipes were exchanged and insightful questions asked by Challengers in the Facebook support group, where seasoned vegan mentors provided encouragement, tips and resources to help people stay on track. Thousands of dollars of fabulous prizes were generously donated by vegan businesses and organisations, and given away via the Vegan Easy and Vegan Australia socials.

Read the full report on the June Challenge.

Each of the new videos ties into one of the daily emails received by Challenge participants. Sign up to join the Challenge and get the emails.

Vegan grocery shopping: Filmed at the Vegan Grocery Store in Glebe, NSW, host Gabrielle from Sustainably Gabrielle highlights how easy it is to shop for vegan products.

Vegan Fanta cake: Stephen and Joanne from the award-winning bakery, The Compassionate Kitchen, with their son Jackson show us step-by-step how to create a fun vegan Fanta Cake.

Vegan strength and fitness: This video features Oceania Powerlifting Champion, Noah Hannibal, and the Melbourne Vegan Strength crew. Noah talks about gaining strength as a vegan athlete and demonstrates how to make a 'Gorilla Strength Pre-workout Shake' as well as seitan, which contains more nutritional value than beef steak!