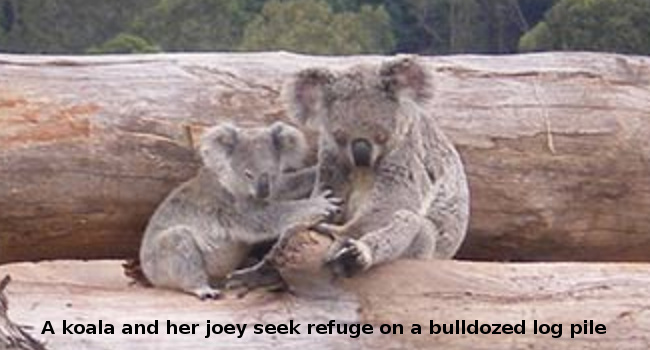 A shocking new report by WWF-Australia has found that millions of native animals are killed each year due to the bulldozing of their forest and woodland habitats.

Bulldozing of habitat, past and ongoing, is a major factor in the 80% decline of koalas in Queensland's Koala Coast.

In Queensland, which produces about half of Australia's beef, over 90% of tree clearing is for conversion to grazing pasture for animal farming.

The report also found that there are no laws protecting animals during tree clearing operations and that the current laws are focused on species and ecosystems and ignore the welfare of individual animals.

In a departure from many conservation and environmental organisations, the WWF-Australia report focuses on the experiences of individual animals rather than on conservation of habitat and species. It states "the fate of all native vertebrate animals is considered important, regardless if the species is threatened or common". The report looks at the suffering and death individual animals experience due to habitat destruction.

The report also states that "cruelty and animal suffering, whether intentional or not, is abhorrent to most Australians" and that there will be strong public support for action.

Habitat loss inevitably leads to suffering and death of the individuals inhabiting an area to be cleared. Species affected include koalas, quolls, bats, bandicoots, native rodents, possums and gliders. Close to a million mammals are estimated to die each year from clearing.

The impact on animals resident in an area to be cleared is immense. Many die during clearing; crushed by machinery or falling trees. Many others die slowly over days or weeks, from injuries, starvation or exposure. Animals left behind in the cleared landscape are highly exposed and vulnerable to predators. Some die when log piles they are sheltering in are burnt or chipped into mulch by machines.

Animals who flee from the clearing suffer on the way - in collisions with vehicles, fences or powerlines, taken by predators, or due to injuries, exposure, starvation, dehydration or disease. If the clearing is extensive or other habitat patches are distant, many animals, particularly the small and young, will die before being able to reach new habitat.

Other deprivations suffered by animals due to clearing include suffocation, starvation, dehydration, heat exposure, heat stroke, infection and disease.