March to Close All Slaughterhouses 2018 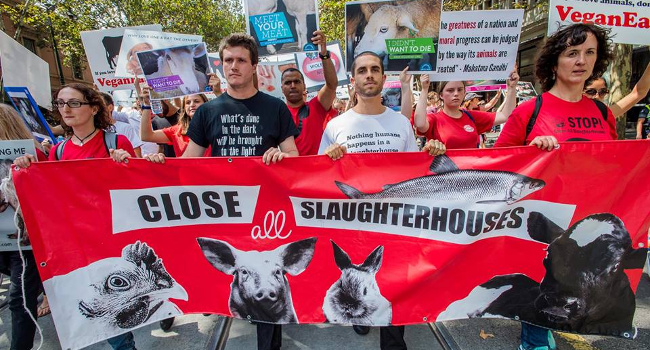 Next week on Saturday 16 June 2018, Australians across the country will join together and march to raise awareness for the millions of farmed animals whose lives are cut short each year. There will be marches in Melbourne, Sydney, Canberra and Brisbane.

The marches are part of an international action that began in Paris 10 years ago and is now held annually in France, USA, Australia, Turkey, Belgium, Canada, Germany, United Kingdom, Brazil, Switzerland and many other countries.

The marches are a way to bring awareness to the public of the suffering and exploitation of animals every day. They are a chance to educate the public about what really goes on behind the walls of the animal industries, and the possibility of adopting a lifestyle kinder to animals, the environment, and to ourselves.

They also act as a way to bring the animal rights community together in international solidarity. The global website for the March is stopabattoirs.org.

In Australia the marches have been growing rapidly every year and organisers expect this year's marches to be the biggest ever. The marches have a positive effect on onlookers as can be seen from this video on Facebook of the recent March to Close All Slaughterhouses in New York.

To get in touch with organisers of the marches see the March to Close All Slaughterhouses Australia Facebook page.