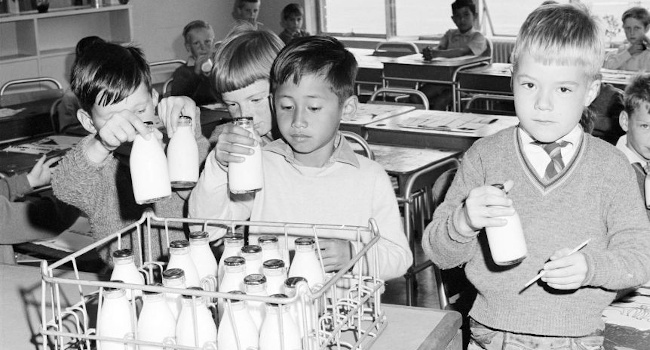 The dairy industry is again seeking to have a national free school milk (cow's milk) scheme reintroduced in Australia. These calls come from dairy industry lobby groups like Dairy Australia and Dairy Connect that want more handouts from the government under the erroneous guise of improving the nutrition of children.

Free school milk in Australia was introduced in the 1950s by the then government with the support of the dairy industry. The scheme ended in 1973 after a review found that the scheme was expensive and could not be justified on nutritional grounds. The Cambridge University Press reported that, "after the cessation of the national scheme, dairy industry initiatives in some states were gradually developed to market liquid cow's milk, including flavoured products, at subsidised prices to school children who were perceived as potential lifelong consumers" (our emphasis).

As the Australian public's interest in consuming dairy declines, as awareness grows about its numerous negative health impacts and as some of Australia's largest dairy farms shut up shop for good, predictably the dairy industry marketing machine is once again pushing for the return of a free school milk program to offload their surplus product. The industry is even lobbying politicians such as Independent senator Nick Xenophon, who proposes that free school milk programs be reinstated "to help fix the crisis in the [dairy] industry".

For the past few years, industry press release messaging has been circulated through the mainstream media. In 2019, Dairy Connect called on the government, "to fund free daily breakfasts, including freely available milk, for primary school students."

This month an article was published by the ABC titled 'Dairy industry wants national school milk program revived to improve health of school-aged children'. The concerningly biased article merely parrots what the industry wants "according to Dairy Australia". The article does not mention any of the downsides of dairy, including the fact that many Australians can not drink cow's milk without suffering negative effects on their health, like abdominal pain, nausea and diarrhoea. Many schools ban peanut butter because of food allergies, and yet here we have a proposal to flood every school in the country with a product that more than 70% of people of Australian Aboriginal and East Asian descent are unable to digest.

The article also does not discuss the fact that the life of a dairy cow, from birth to death, is one of suffering. The industry forcibly artificially inseminates her, milks her throughout most of her nine-month pregnancy and then takes her calves from her after birth. Her female calves replace worn-out 'milkers' and her male calves are killed for meat or as 'waste'. Due to the enormous volume of milk she has been bred to produce, she is prone to suffering from painful mastitis or lameness.

Nor does the ABC article mention that humans can obtain all their required nutrients without consuming cow's milk products. As Leah Dowling, Lecturer in Dietetics, Swinburne University of Technology says, "There is no reason why people need to drink dairy milk. All of the nutrients in milk can be obtained elsewhere in the diet."

The falling nutritional health of children is a serious issue and must be addressed, but boosting cow's milk consumption is not the way to improve it. Limiting the advertising of junk food and drink would be good place to start. Introducing healthy balanced plant-based lunches to schools could be another. The proposal to supply free cow's milk to school children should be rejected as an obvious ploy by an industry with vested interests to make more money at the expense of children's health.

Vegan Australia recently made a submission to a government inquiry into the dairy industry, pointing out that it is unsustainable and recommending that the industry be transitioned towards a plant-based future. These calls for the industry to be propped up are more proof that dairy is dying and should phased out.

It is worthwhile noting that the Australian Dietary Guidelines are up for review very soon and it appears that the dairy industry is very concerned that Australia will follow Canada and moves in the US to remove dairy as a separate food group in the guidelines. Vegan Australia and other groups are preparing to strongly put the case that dairy should be removed from the guidelines on equality, health, cruelty and environmental grounds. Watch this space!