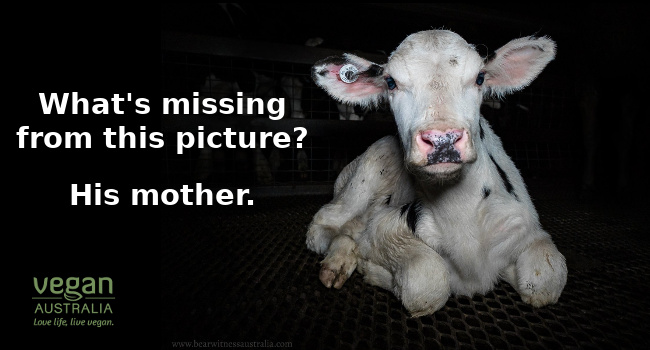 In a campaign for World Milk Day, Dairy Australia is trying to persuade the public to drink more milk. Their goal is to increase their profits and they are doing this by exploiting Australian's good nature. Remember that the dairy industry is a global industry and is in it for the money, so don't necessarily believe what they tell you.

In the campaign they ignore the fact that an estimated 65% of people have some degree of difficulty digesting cow's milk. This figure rises to 70% for Australian Aboriginal populations and to over 90% for some Asian populations.

They also hide from the public the truth about how the dairy industry exploits the cows and calves used by the industry. People are now waking up to the suffering in the dairy industry and are switching from cow's milk to the rich variety of plant-based alternatives. They are supporting all the hardworking people who bring healthy plant-based food to their tables, without the sort of suffering inherent in the process of taking milk from a mother cow.

Vegan Australia urges you to switch to plant-based milks. This will:

Support the broad farming community: Every nutrient in cow's milk can be found in whole plant foods, so Australians can support a range of farmers by enjoying the growing diversity of delicious plant milks. They will help the macadamia farmers, the oat farmers, the pea and hemp farmers and all the other farmers of the nuts, grains and seeds that go into plant-based milks.

Avoid causing suffering to animals: The life of a dairy cow, from birth to death, is one of suffering. The industry forcibly artificially inseminates her, milks her throughout most of her nine-month pregnancy and then takes her calves from her after birth. Her female calves replace worn-out 'milkers' and her male calves are killed for meat or as 'waste'. Due to the enormous volume of milk she has been bred to produce, she is prone to suffering from painful mastitis or lameness.

Switching to plant-based milks means that you are no longer part of this unnecessary suffering.

Be better for the planet: Animal agriculture, including the dairy industry, is one of the leading causes of climate change, species extinction, loss of fresh water, rainforest destruction and air and water pollution. By switching from dairy to plant-based milks you can significantly reduce your impact on the planet.

Be better for you: The consumption of cow's milk is linked to iron deficiency in infants and toddlers, a higher risk of autoimmune diseases, including type 1 diabetes and Crohn's disease, and prostate cancer. Cow's milk does not reduce the risk of bone fractures and may even increase the risk, and whole cow's milk is high in calories and fat. Only one third of people produce the lactase enzyme which enables them to digest animal milk during adulthood.

You don't need cow's milk to be healthy. Research consistently shows that a whole food plant-based diet, including plant milks, is good for your health. Such a diet can help prevent hypertension, obesity, diabetes, heart disease, and some kinds of cancer. Soy milk contains fibre and has twice as much folate as cow's milk.

Give you a better selection: The rise of plant-based milks around the world means that consumers are no longer limited to soy milk but can now choose from a wide selection of plant-based milks, from almond, coconut, oat, rice and cashew to macadamia, hazelnut, pea, hemp and peanut milks.

Be better for people: The land used for growing crops to feed to animals in order to produce dairy milk is far larger than the land used to grow the crops used for plant-based milks. Reduced land use means that there is more land available to grow crops for people rather than farmed animals.

Help dairy farmers shift to a better industry: In Australia, the plant-based milk sector has seen strong annual growth over the past five years, while the consumption of dairy milk is falling and is likely to continue to fall. 1 in 6 Australians are now going dairy free. The growth in the popularity of plant-based milks is giving rise to dairy farmers moving into more profitable plant farming. Dairy farms are often on very fertile soils that can be converted to macadamia and other nuts and produce suitable for plant-based milks.

For more information on cows, calves and the dairy industry see: