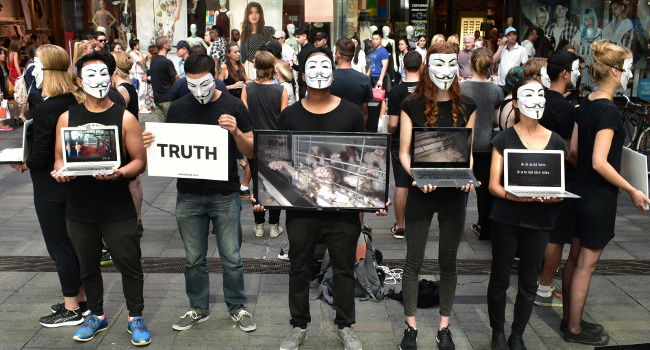 Sheila Hart examines the Cube of Truth, highly effective public outreach events occurring in cities and towns around the world. The events show footage to the public of what "food animals" experience in the animal agriculture industry. The footage is all local and shows only practices which are considered "standard" by the animal farming industry. Onlookers are encouraged to switch to a vegan lifestyle.

The founders of Anonymous for the Voiceless (AV) originally created the Cube of Truth through experimentation on the streets. These demonstrations originated in Melbourne in early 2016.

Held in high foot traffic areas such as public malls, activists stand in a cube formation, wearing masks and dressed in black. The founders of AV describe the operations as 'educational art based performances'. "We are anonymous because our identity in the cube isn't important, what we are presenting is, what we want the public to focus on." The masked crusaders hold media devices showing powerful footage such as 'Thousand Eyes - The reality of Australian animal agriculture'. Emotive music like Moby's 'Memory Gospel' accompanies this footage for maximum effect.

This creative scene draws onlookers in to stop and watch. Their facial expressions rapidly turning from that of happy shoppers to shocked and disgusted bystanders. Andrew Faulkner, a dedicated animal rights activist, hears typical comments from horrified onlookers. "Is this Australian? No way!'" or "My meat is treated more humanely than that." This is where the conversations begin. They will then be approached by an 'outreach activist' who will help them understand the grave impact of their food choices.

"If you are looking for the highest number of quality conversations and vegan conversions, you can't go past the Cube of Truth."

Over time and with the efforts of tireless volunteers, the cube has grown and developed exponentially.

"It was absolutely amazing. Our first demonstration saw 170 conversions in four hours. I became involved because I had seen it done in Melbourne for months leading up to our demonstration. After speaking with some of the members from Melbourne who were coming to Sydney to host a cube, I knew I wanted to be involved. Immediately after the first cube I was sold on its power and sought to become an organizer of the Sydney chapter."

Outreachers learnt how to successfully communicate with bystanders, flyers were printed and large televisions replaced laptops. There seems to have also been a shift in the public's reaction in recent months. "There is very rarely a person laughing or mocking us. We sense the public know they will be forced to face the truth. And many are holding that mirror up to confront it." Andrew has observed this change slowly happening since January 2017.

The efforts of these determined campaigners have seen Sydney become Number one in vegan conversions in recent months, surpassing Melbourne. Matt explains the power of a five and half hour demonstration in Pitt Street Mall. "Our best effort has seen 304 individuals taking the cruelty in their diet seriously and transitioning to become vegan. On top of that we have hundreds more conversations and have our footage viewed by countless more. The Cube of Truth is by far the most powerful and effective form of activism available to any vegan activist at present."

Matt Rota became involved with Sydney's Cube of Truth during 2016 through Facebook. He believes this form of activism is most successful in terms of overall effectiveness and highest conversion rate. "Purely because you can immediately tell who is and is not worth talking to. If you see someone having an emotional reaction to the footage you know that they will respond well to a conversation, while if someone finds the footage humorous it's clear that it isn't worth your time."

That's one of the beautiful things about the cube, it allows you to have a one on one conversation to sincerely reach people on an individual level.

Lachlan recalls one of the best things he's seen at a Cube event:

"One guy was heckling us. Then he watched the video. Then he vowed to go vegan. Then he jumped in the cube. From vegan heckler to vegan activist in 30 minutes."

The cube is not without its rewards for those who participate. The immense feeling of satisfaction in knowing you have helped someone make the connection can never be beaten. Matt Stellino claims, "There is no drug like it. I feel euphoric with a simultaneous amped up high." Andrew also relishes in this feeling after a demonstration, "It's the hugest emotional high I've ever had. It is electric and the veins explode. It can be difficult coming down."

Watch here to see how effective Cube of Truth can be:

There is no sign of stopping these street demonstrations as they continue to gain momentum. Sydney will soon be hosting the 'worlds largest cube' on Saturday 7 October 2017. Activists will attempt to break the world record in number of attendees and vegan conversions.

If you are keen to participate in a Cube, Matt Stellino personally invites you join in. "If you are unsure of your ability, please don't be. Screen and sign holding volunteers are extremely important as they allow the outreach to be possible. We also offer informal outreach training sessions and role play scenarios at dinner after the cube so you will be a pro in no time."

"We have no option but to make a difference. This is the absolute least the animals deserve. We cannot stop and we would never want to stop. This is who we are. Defenders of animals." - Andy Faulker

So, what's your next move? How will you become active and involved? Wherever you are, whatever you choose, do it and do it now! Find out more at anonymousforthevoiceless.org and check out upcoming Cubes on the Anonymous for the Voiceless Facebook events page.