Carnage: A glimpse into a vegan future 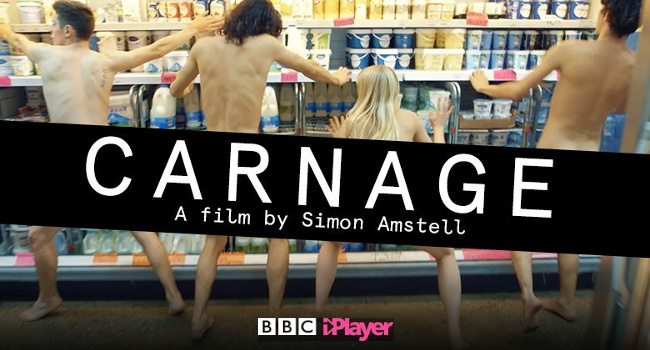 Here is a scene from Carnage:

"Carnage: Swallowing the Past" is an inspiring and uplifting film which allows us to imagine a future vegan world, where humans no longer use animals for food, clothing or any other purpose. The film is definitely a comedy, with a wry and understated sense of humour, but it has a very powerful message. While some of us may think that the world will never change, this film gives us a feel-good (and playful) picture of what it might look like.

Set 50 years in the future, Carnage shows an idyllic world where the idea of eating flesh and bodily secretions of animals has become unimaginable. Young people are in touch with their feelings of unity with each other and with other animals. "For these youngsters, the idea that human beings like them were once complicit in a bloodbath of unnecessary suffering is too absurd to imagine." As one young person says tearfully "Why would anyone eat a baby? Just a little baby. A little baby lamb". This theme, why people ate animals, is a thread explored throughout the film.

In this future world, older people, those who used to eat animals, now suffer remorse and guilt. "There remain painful memories of a time before empathy, before we realised we had to stop eating each other." It has become taboo to even talk about this shameful animal-eating past. People have repressed these feelings for decades and "a whole generation is being suffocated by shame."

One of the characters in the film, a psychotherapist, has written a "taboo-busting and deeply personal book", The Guilt Of Eating Your Brother, which suggests that former meat-eaters are psychologically under threat. The therapist helps these people by encouraging them to express their feelings of guilt and make apologies to the animals. This lifts the shame they feel. "We couldn't have known we were active participants in the slave trade, because the language of the time suggested we were just eating our dinner."

The film is a "documentary" made in 2067, looking back at the history of veganism from 1944 to the "present". It also serves as a lesson to younger generations about the brutality of the past and a reminder not to repeat it. Regarding the animal-eating past: "history has been replaced with silence". As one character says, "If you try to explain the dairy industry to young people today, they'd be traumatised."

Much of the film is an examination of why people believed it was OK to eat animals. It covers similar ground to Melanie Joy's concept of "carnism", the invisible belief system that conditions people to eat certain animals. For example, the film looks at how fast food advertising made it acceptable for children to enjoy watching a film like "Babe" and then celebrate afterwards with a "Happy Meal". And how television cooking shows helped normalise meat eating. "Nobody is to blame. We were all victims. Our parents just did to us what their parents had done to them."

While the film concentrates on the ethics of eating animals, it also looks at other issues, such as swine flu and mad cow disease, the link between meat eating and cancer, heart disease, diabetes and obesity, the environmental impact of animal agriculture, such as species extinction, climate change and flooding, the rights of women and the English class system.

A high point of the film's narrative is when the government passed the 2035 Bill of Animal Rights. This "criminalised the enslavement, breeding and killing of all animals as well as the manipulation or consumption of anything coming out of one."

The future presented in the film is an idyllic one, where people are peaceful and happy and "where violence has been defeated with compassion, depression cured with intimacy". The implication is that ending meat production and consumption has improved people's mental and physical health and made the world a more peaceful place. While idealistic, this view echoes that of Will Tuttle in The World Peace Diet. In this book he looks at how historically violence towards non-human animals has been normalised and how people fail to make the connection between the flesh on their plate and the animal from whose body it was taken. This undermines their capacity for compassion and teaches them that it is OK to oppress the voiceless and weak to fulfil their desires. This can transfer into other areas of human life and can kindle historical atrocities such as human slavery, conflicts and war.

The film is valuable because it gives us a vision of a vegan world. Vegan advocacy has come a long way in the last few years. Until recently, vegans were limited to trying to persuade others to become vegan. We are now working towards changing institutions and laws to pave the way to a vegan world. Carnage is one more step on this road.

Let's finish with some memorable quotes (some humorous) from the film:

Carnage is a BBC production that can be viewed here, but only if you live in the UK: bbc.co.uk/programmes/p04sh6zg

If you are not in the UK, another way to view Carnage is to add an extension to your Chrome web browser which allows you to watch BBC iPlayer from anywhere. The extension is: Beebs - Access BBC iPlayer. After you have installed the extension, use the BBC link above to view the film.

Several people have uploaded Carnage to YouTube and other sites, but after a time these may be removed due to copyright issues. Here are a couple of links that were working at time of publication:

This article originally appeared in the September 2017 issue of The Australian Vegan Magazine (page 18).