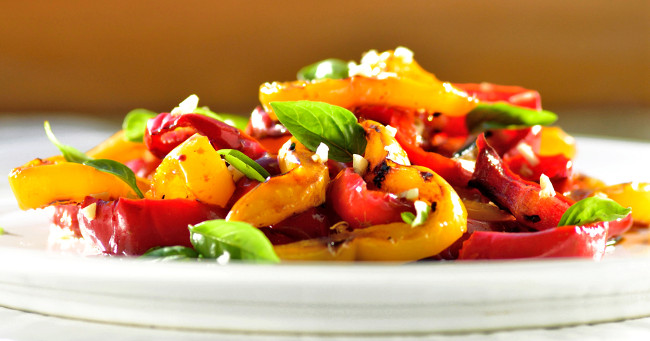 There is a growing trend for consumers to opt for healthy and cruelty-free fare. Vegan Australia's Vegan dining campaign assists restaurants to tap into this expanding market. By providing a vegan menu restaurants can show innovation and forward thinking.

High-quality vegan food is a great solution for caterers because it appeals to just about everyone - it's tasty, healthy, ethical and planet-friendly. Having good vegan options on the menu will broaden the customer base and means the restaurant is automatically ready to cater for practically any customer who comes through the door. Vegan food is inclusive and is suitable for:

If a restaurant can cater for vegans, they are more likely to win the custom of group bookings where some members of the group are vegan. Say if there is a group of 20 family members, friends or colleagues arranging a meal together and there is one vegan in the group, the whole group will want to go somewhere where everyone, including the vegan, will have something good to eat. Or put another way, if a restaurant does not provide a good vegan option, they lose the custom of 20 people. As stated by the US Nation's Restaurant News: "Vegetarian dishes, aside from being less expensive ... also mitigate the veto vote. Usually, if you have a vegan in your party, that will dictate where the party eats ... They want to make sure everybody's going to be satisfied, so diversity is going to be very important on the menu." According to a 2013 survey 78.52% of vegans eat in non-vegan restaurants.

Vegan Australia is campaigning for more vegan items on menus because more vegan options in restaurants will make it easier for people to become vegan and stay vegan. This will mean less suffering and death for animals. It will also be better for the environment, improve people's health and reduce the pressure on food resources worldwide.

It often takes just a few small changes to make vegan food available and in the process improve business. As well as bringing in new customers most vegan food has the bonus of being cheap with larger profit margins. Although you may start with small changes there is little doubt that the more effort you invest the more likely you are to end up with some fantastic vegan choices.

If you are a restaurant or cafe and want to add more vegan options to your menu, contact a menu consultant like Every Seat at the Table.

Quantitative evidence of an increase in demand for vegan menu items

Exact statistics about the number of vegans and the number of people who at times eat vegan meals are somewhat hard to come by. This is particularly true for Australia. A few that can be found are:

Mercy for Animals states that "Americans are steadily adjusting their eating habits to reduce or eliminate meat and other animal products from their diets. The market for vegetarian food products grew from $646 million in 1998 to $1.6 billion in 2003 and was projected to reach $2.5 billion in 2008." They also state that "Vegans are the fastest growing segment of the vegetarian population, and it is this population that should be the focus of your new menu items." and that "the number of people ordering vegan food at restaurants is growing exponentially."

In their article How many adults are vegan in the US, the Vegetarian Resource Group state that 30% of Americans are "very interested in vegetarian foods", even though they are not vegetarian. Some statistics on the diets of young people in America can be found in their survey How Many Youth Are Vegetarian?

A number of national restaurant chains in the USA are currently supplying vegan options.

Influenced by an increasing awareness of what constitutes healthy eating habits, an abundance of young people are also eliminating animal products from their diets. Young people have tremendous buying power and will carry these consumer habits into adulthood. This information from the US Mercy for Animals restaurant campaign:

More information can be found in the Mercy for Animals Vegetarian Resource Guide for Restaurants and the Vegan Society (UK) Vegan Catering for All pamphlet.

A 2017 survey by research firm GlobalData reported that 6% of US consumers now claim to be vegan, up from just 1% in 2014 and 44% of Germans follow a low-meat diet, up from 26% in 2014. Popularity is highest among young people, particularly millennials - the world's largest generation. Interestingly, 38% of global consumers eat meat, fish or poultry less that once a week. While the report does not cover Australia, similar trends in direction are likely here.

A summary of many worldwide statistics appears in the Food Revolution article Why the global rise in vegan and plant-based eating isn't a fad (600% increase in US vegans + other astounding stats).

Qualitative evidence of an increase in demand for vegan menu items

There are a number of other indications that the demand for vegan menu items is increasing. Some of these are listed below.

Things individuals can do to encourage restaurants to offer vegan meals

Things Vegan Australia plans to do

1) In Australia, consumption of animal products (measured as calories per person per day) has fallen about 20% since the 1960s. For the raw data, see the United Nations Food and Agriculture Organization database here and here. To search the database enter the values as shown below. There is some yearly variation and so selecting other years in the 1960s and 2000s can show up to a 25% reduction in the consumption of animal products. 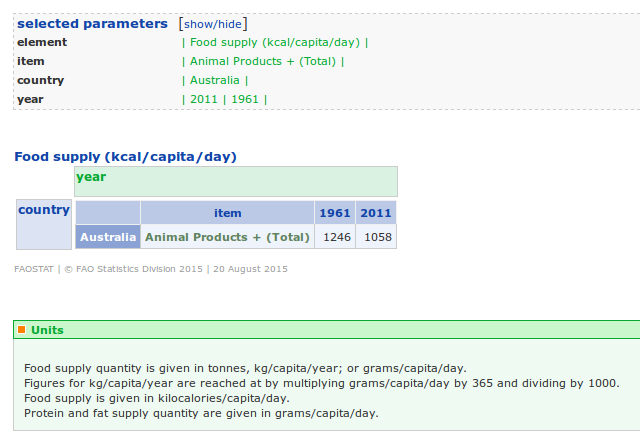