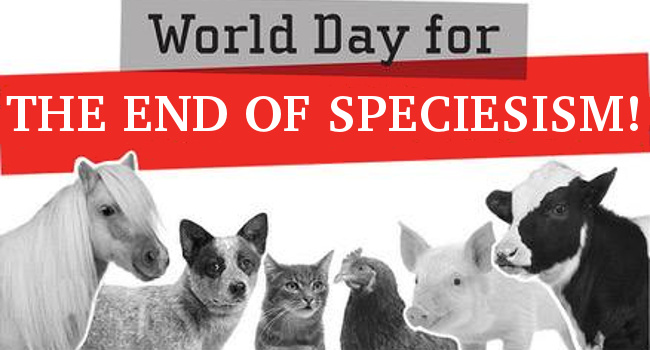 While many of you reading this will have heard of the word "speciesism", most people in Australia have not and do not know what it stands for. Making this word, and the concept behind it, understood more widely is the goal of the World Day for the End of Speciesism, now in its third year.

This year, World Day for the End of Speciesism will be held on Saturday 26 August, with events being held around the globe, including Europe, North America, and New Zealand, as well as in Australia. Events in Australia include a March through the city in Melbourne, a Cube of Truth demonstration in Sydney, a March and outreach event on the Gold Coast and a Gathering in Parliament Gardens, Hobart.

Injustices of the past, such as slavery and the low status assigned to women, have been made illegal or reduced. They too were so embedded in the collective consciousness that they were thought to be eternal. But history has shown the opposite and we can easily imagine that one day slaughterhouses will be deemed to be a symbol of barbarity. More and more of us are beginning to take a stand against injustice to animals, which has become one of the most important social debates of our time.

We are working for a world that takes the lives and interests of all into consideration.

This world is already on its way.

Let's work together so that it arrives as soon as possible!

Please help spread the word to make this event a worldwide success.