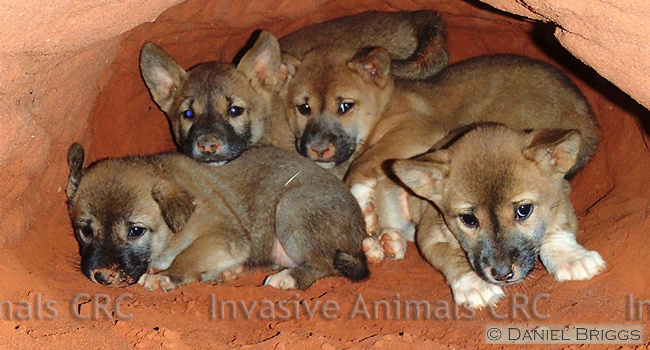 Dogs, just like those you may care for in your home, are routinely trapped, poisoned and hunted in NSW. These dogs are individual, sentient beings with likes, dislikes, wants, needs and emotions, but because they pose an economic threat to the animal agriculture industries, they are labelled as 'wild dogs' and 'pests' and, by law, must be 'controlled' by landholders.

Vegan Australia has made a submission to the NSW Department of Primary Industries proposing that the new Wild Dog Management Strategy be modified to make the interests of all animals, including wild dogs, the primary focus of the strategy.

Vegan Australia is pleased to provide input on the updated NSW Wild Dog Management Strategy 2017-2021 as part of the public consultation process by the Department of Primary Industries. We hope this submission assists in the preparion of the final strategy.

This consultation provides an opportunity to reflect on the mistreatment of wild dogs in the name of 'pest' control. The proliferation of unwanted wild dogs in NSW is a complex problem, yet a simple 'solution' is often presented: we must kill the 'pest' animals. This 'solution' causes a great deal of suffering and harm both to the dogs themselves and to other animals who are victims of poorly targeted efforts. Furthermore, lethal 'solutions' are frequently ineffective, and often exacerbate the ecological harm.

In this submission, Vegan Australia will put forward the case that wild dogs deserve our respect. Further, it will be argued that phasing out animal agriculture will significantly help efforts to minimise the impact of wild dogs and other introduced species, and allow resources to be directed to where they are needed most.

Vegan Australia stresses that the animals we commonly classify as pests, in this case wild dogs, are individual, sentient beings with likes, dislikes, wants, needs and emotions like any other animal, human or non-human.

Few people need to be convinced of the emotional and cognitive capacities of dogs, yet there is a substantial gulf between how individual dogs are treated in the home and how they are treated when designated pest status. The cognitive and emotional capacities of dogs are high. They have well developed personalities and emotions, and live in complex social groups that emphasise elements of play, learning, and empathy between animals (among many other cognitive abilities)1.

It is through no fault of their own that these complex individuals are considered pests; they are merely trying to survive and thrive in their environment as any animal does. The fact that they place an environmental, economic, and social burden on landholders is, instead, the fault of those who introduced them, not the fault of the animals themselves. While Vegan Australia acknowledges that we must work to address these impacts, the burden of suffering should not fall solely upon the animals for our mistakes.

We note that the NSW Wild Dog Management Strategy makes almost no mention of the welfare and interests of the wild dogs. For example, the strategy does not even include the dogs themselves in its list of stakeholders, whereas private landholders and their interests are given top billing. The interests of animals should be the primary focus of the strategy.

Vegan Australia is working towards ending unnecessary animal suffering. Hence we propose that animal agriculture in Australia be phased out over 10 years. This is because farmed animals suffer routinely in the agricultural industry and also humans have no need for their products. Threats to the economic viability of animal agriculture are not legitimate reasons for 'pest' control. The impact of this is threefold.

Firstly, a phase out of animal agriculture would significantly reduce both the government and social burden of 'pest' animal management, allowing resources to be focused on threats to the environment. It is worthwhile to look at the impact of wild dogs compared to other animals. With the exception of foxes, 'pests' that have a significant economic impact do not have a significant environmental impact (see Table 1, below, figures for Australia as a whole)9. As long as 'pest' management strategies continue to be focused on economic impacts in general, and the impacts on animal agriculture in particular, it is disingenuous to frame 'pest' management as an environmental issue. 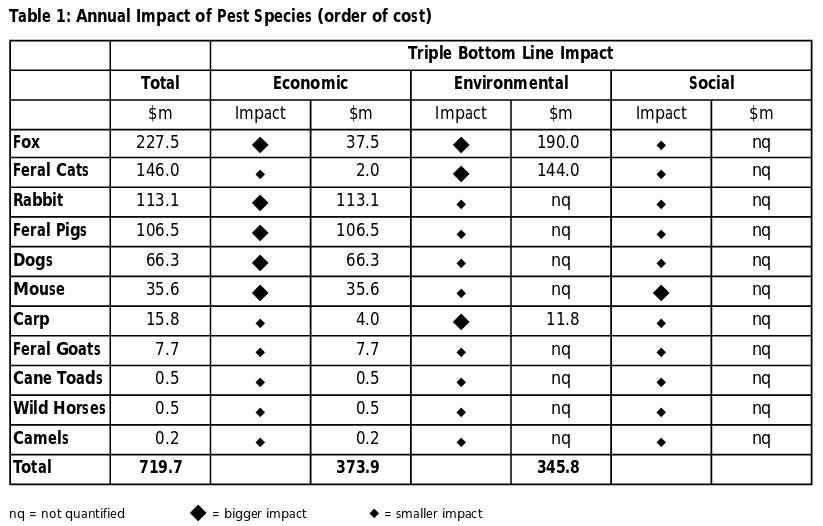 Secondly, it must be recognised that the environmental impact of animal agriculture in general, and livestock grazing in particular, is one of the greatest causes of species extinction. Moreover, the impact of non-native species on species extinction is magnified by the habitat loss and land degradation that is overwhelmingly caused by animal agriculture10. It is both hypocritical and counterproductive to focus on the environmental impacts of invasive species while our own actions continue to have a much greater impact on delicate ecosystems.

Thirdly, the phase out of animal agriculture allows for the rewilding of areas previously cleared for pasture. These pastures provide food for wild dogs well in excess of what would otherwise be available, in the form of livestock, and are responsible for the population explosion of this species. 56% of the Australian continent is currently used for animal agriculture, much of which has been substantially transformed from its native state13. The position for NSW is roughly similar. Far from working to reduce the environmental impact of animal agriculture, the rate of land clearing has been increasing in recent years14, much of it illegally15. Ceasing the use of pasture, and subsequent rewilding, would have the dual effect of naturally reducing the population of many 'pest' animals (including wild dogs), while strengthening ecosystems against environmental stresses16.

We note that the strategy states that it "promotes a balance between managing wild dogs in areas where they have negative impacts and preserving their ecological role elsewhere." By removing farmed animals from the agricultural system and revegetating previous grazing land we would virtually eliminate areas where wild dogs 'have negative impacts' and hence the Wild Dog Management Strategy would become one of 'preserving their ecological role'.

Therefore, Vegan Australia calls upon the NSW Wild Dog Management Strategy to advocate for the proposed phase out of animal agriculture over the next 10 years. Doing so would allow the strategy to better allocate resources, strengthen native ecosystems, and naturally reduce wild dog populations.

Traditionally, many people have held attitudes towards the control of animals classified as pests that were not only cruel, but also ineffective. This has often been reflected in the policies of governments at all levels. Attitudes, however, are changing. More people than ever are seeing the need to treat all animals with compassion. This compassion need not be an impediment to effective control of 'pest' animals, including wild dogs. Phasing out animal agriculture can strengthen ecosystems, reduce the potential for harms of 'pest' species, and increase the resources available for effective environmental stewardship. The NSW Wild Dog Management Strategy is a real opportunity to improve the lives of animals while simultaneously safeguarding our unique and fragile ecosystems.