Who is Responsible for the Amazon Fires? 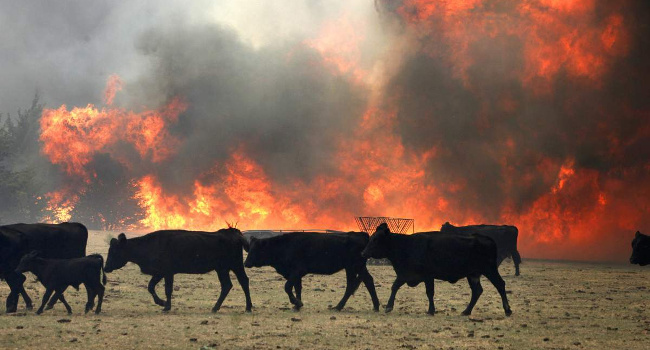 This is an essay by Dr Will Tuttle, author of the book The World Peace Diet. The essay looks at the Amazon fires currently being reported in the media. See here for original essay.

It's difficult to overstate the seriousness of the devastation being wrought on our planet by the tens of thousands of fires now raging in the Amazon. What is clear is that the fires are directly caused by ranchers and farmers who have been clearing the primordial rainforest primarily to grow genetically-modified soy as livestock feed for export to markets in Europe, China, and North and South America, as well as to graze cattle. Animal agribusiness operators cut down the forests to expand their farms and ranches, and then set fire to the piles of logs they've created--thousands and thousands of fires.

This is not new. Researchers and environmentalists have been decrying the cutting and burning of the Amazon, which has been going on at the rate of about an acre per second or acre every several seconds, for the last few decades. They have been warning that eventually the Amazon rainforest will completely disappear, which will have a calamitous impact on the entire planet's biosphere. Part of the problem is that when the destruction reaches a critical mass--when about forty to fifty percent of the forest is left--it won't be large enough to attract and create the large-scale ongoing rainfall that makes the whole system possible, and the entire forest will collapse and disappear, leaving a dry and deserted wasteland. This is because rainforest soil is very thin, with most of the biomass in the canopy.

This Amazon destruction is catastrophic. Not only is the Amazonian rainforest an essential part of the global climatic system, it's also called the lungs of the planet, creating about a quarter of atmospheric oxygen, as well as being home to most of the genetic diversity of animal and plant life on land. Mainstream media has never reported on this because it is not in the interest of the primary advertisers (fast-food, pharmaceutical, chemical, petroleum, and banking industries) for the public to be aware of this serious ongoing problem. That might result in people questioning their primary food choices, which would be harmful to corporate profits.

What is new is that the media is now for the first time reporting on the cutting and burning of the Amazon, and of course this destruction is now more intense and widespread under the new Bolsonaro regime in Brazil. So of course many fingers are being pointed at President Jaim Bolsonaro, whose regime is closely allied with Brazil's powerful and wealthy ranching industry, because it's obvious that the somewhat minimal protections afforded the Amazon's trees, wildlife, and indigenous populations in prior administrations have been abandoned, and ranchers are being allowed to profit immensely from the short-sighted destruction and exploitation of an irreplaceable global treasure of unimaginable value. So some blame Bolsonaro.

Others blame the United States, which they allege orchestrated the impeachment of Brazilian president Dilma Rousseff in 2016, and engineered the regime-change which brought Bolsonaro into power in January of 2019, basically as a U.S. puppet. We have seen this happen in many countries over the years. Regimes in countries that attempt to protect their people and environment--and not allow free access by U.S. corporations, financial institutions, and military installations--are targeted economically, politically, and in the media, and replaced with more "democratic" (pliable) ones.

Looking even deeper, others blame capitalism itself. As a system that directly emerged from animal agriculture, as I discuss in The World Peace Diet, capitalism is based on reducing animals to commodities (capita meaning "head") and the consequent exploitation of the weak by the strong as it has evolved through the centuries. Contemporary transnational corporate capitalism reduces animals, ecosystems, and human beings to mere objects to be exploited by immortal organizations with such wealth and power that they influence and control governments on virtually every level, including that of the United States. There are the corporations that profit from the destruction of the Amazon: the fast food, chemical, pharmaceutical, medical, petroleum, and agricultural industries. Beyond the corporations, there are the big banks who invest in, direct, and profit from the transnational corporations. Controlling the big banks is a handful of typically invisible financial holding companies. Now we're looking at a relatively small number whose wealth and power control the institutions and narratives that shape our world. Much has been written about how they operate through politicians and political parties, through media, film, and technology, and through most of the avenues of education, religion, science, government, finance, and culture. This has evolved over time and is accomplished through the compartmentalization of institutions so that people only see what they're allowed to see. The capacity of the general population to comprehend what is actually happening is shut down by relentlessly supplying disempowering fictional narratives that get embedded within the individual consciousness of virtually everyone.

So, how do we respond to the Amazon fires, and to the larger crisis of which they are a part? Who is responsible for the fires? Or better put, who is response-able? Each one of us is responsible, not just because our collective actions and thoughts create our reality, but also because we are able to respond, and we can do so in a variety of ways. Some of us are signing online petitions urging President Bolsonaro to impose penalties on the agribusinesses cutting and burning the rainforest. Some, like Greenpeace, have created an online petition calling on the management of KFC, McDonald's, and Burger King to stop sourcing their burgers and the feed for their imprisoned cows and chickens from Brazil. Obviously, these are merely ineffectual band-aids because they fail to address the root of the problem, which is animal agriculture itself. The inescapable and gross wastefulness of feeding animals rather than eating plants directly is the driving fury causing deforestation, as well as ocean destruction, aquifer depletion, air and water pollution, species extinction, and the proliferation of disease and conflict.

It would be far more interesting and relevant if Greenpeace called on meat, dairy, and egg consumers to stop purchasing these products completely, and to move to a plant-based way of living and to encourage others to do the same. In fact, we see that Forbes magazine reports that KFC just debuted its plant-based chicken, called Beyond Fried Chicken, in Atlanta a few days ago and totally sold out in just five hours. Some people at least are obviously making the connections, and responding, which is inspiring.

Thankfully, each one of us can respond to the Amazon fires, and to the deeper cultural and ethical malaise of which they are a manifestation. We can do our best every day to bring our lives more fully into alignment with our values of caring for the Earth, animals, and each other by moving to a whole-foods, organic, plant-based way of eating and living, and by helping to share the many benefits of this with others. We can take other direct actions to share this message with others, and to influence policy, as we are guided. And importantly, we can make ongoing efforts to question the narratives--both external and those that have been internalized--that are propagated by media and education channels that promote materialistic explanations of reality, that divide and separate us from nature and each other, and that rationalize harming and exploiting those who are vulnerable, especially animals and children. We can make our life an expression of caring and of self-inquiry, and do everything we can to contribute to solutions, rather than being part of the problem.

The planet was burning when we landed here, fueled by the greed and exploitation inherent in animal agriculture. Though we've been wounded and indoctrinated by the prevailing narrative, we can heal our wounds, awaken from our indoctrination, and help put out the fires. Vegan living brings physical, cultural, and spiritual harmony by helping us question the burning insanity of abusing animals and ecosystems, and guiding us back home to respect, kindness, and being responsible co-creators on this magnificent Earth.