What the Health film premiere screenings in Australia 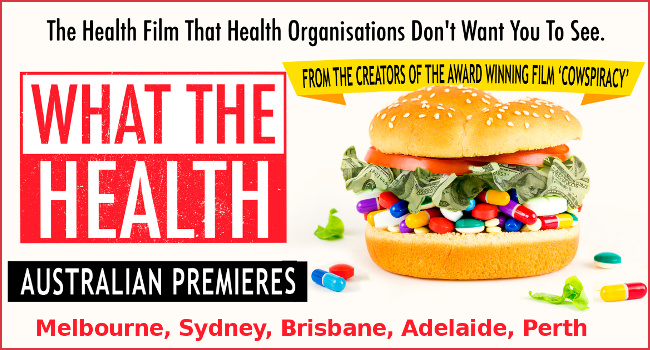 What the Health is the groundbreaking follow-up film from the creators of the award-winning documentary Cowspiracy. Premiere screenings are occurring in cities across Australia, including Melbourne, Sydney, Brisbane, Adelaide and Perth. See below for details.

The health film that health organisations don't want you to see, the film exposes the collusion and corruption in government and big business that is costing trillions of healthcare dollars, and keeping people sick. This is a brilliant film that you'll want to see and share with your non-vegan friends and family.

The film follows intrepid filmmaker Kip Andersen as he uncovers the secret to preventing and even reversing chronic diseases - and investigates why leading health organisations don't want us to know about it. With heart disease and cancer the leading causes of death, and diabetes at an all-time high, the film reveals possibly the largest health cover-up of our time. The film features medical doctors, researchers, and consumer advocates, all experts in their fields.

Audiences will be shocked to learn the insidious roles played by pharmaceutical companies, agribusiness, and processed animal food companies, especially in the most vulnerable communities, and will cheer at the transformation and recovery of those who took their lives into their own hands.

What The Health is a surprising, and at times hilarious, investigative documentary that will be an eye-opener for everyone concerned about our health and how big business influences it.

What the Health is being screened in the following cities.

The Astor Theatre, an iconic art deco, wide-screen cinema, will provide the backdrop to a night of entertainment, enlightenment and the opportunity to enjoy the future of cinema dining with delicious offerings from some of Melbourne's best cruelty-free caterers.

This will be a wondrous evening of film, live music by Soundscapes with Emanuel Lieberfreund and Curt Hannagan, chocolate tasting by The Chocolate Yogi and a mini-expo of vegan food and products.

Following the film there will be a mini vegan expo in the adjoining room featuring ten popular vegan food vendors offering food and drinks for sale, including Syndian Natural Foods, The Chocolate Yogi, Tonicka Kombucha and many others.