What about the workers!? 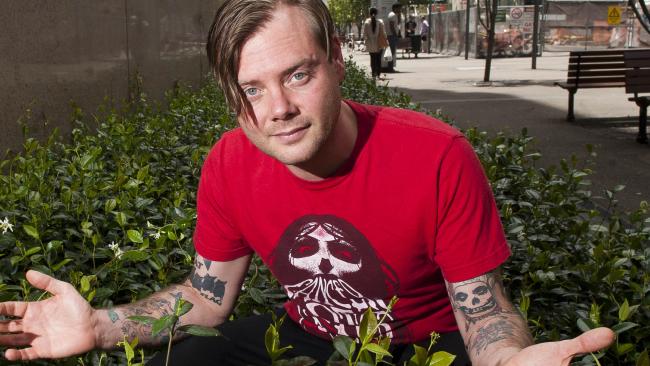 Lindsay McDougall, Frenzal Rhomb guitarist and "The Doctor" of Triple J fame, spoke before the Sydney March To Close All Slaughterhouses on 4 June 2016. Here is his speech.

I want to start by taking you inside the life of a living being in a slaughterhouse.

She was born here. Or near here. Had to be, she's never been anywhere else. Grew up here, running around these fields. Was fed here, became mature here. Her parents aren't around anymore, though they never really were. She wasn't alone, she spent a lot of time with ones just like herself. Not quite family, not quite friends. She vaguely remembers happiness, but that is a distant memory. These days, it's all death and pain, all around her. She's seen so much. Heard so much on the inside of those heavy doors.

Every day it's the same. It's crowded and hot. There's nowhere to escape. There's nowhere else to go. It's all she knows. There are brawls, scuffles, violence. The more powerful ones brutalising the weaker. No one notices. No one does anything. There no one coming to help them.

A couple of the ones like her died last week. She saw hooks though necks, or bodies crushed in machines. She can't remember exactly, it's all blends into one bloody mess.

Sometimes, as the sky darkens, she wonders if this is all there is. If this is as good as her life gets, or if one day she'll make it out of here. Or maybe one day she's going to be the one on the end of the hook or between the clutching cogs of the machine.

It doesn't seem fair. She's a living being. A living, feeling being.

But that is the life. The dark, horrible life, of a human being who works in a slaughterhouse.

Now don't worry, I care about non-human animals too. Deeply. When I went vego and then vegan back in the 90s, incidentally before it was cool, I didn't know anything about the lives of slaughterhouse animals. Or maybe I did, but it was at arms length; a scene in a movie or an article in a newspaper. It took a bunch of people who knew better to educate me, to lift me out of my kind of innocent ignorance.

I grew up in the Sutherland Shire though. Less than an hour away from here, the city of Sydney. A city full, even back then, of vegetarian options and vegan menus and your choice of various bean and nut milks and activated almonds. (Actually fuck that, activated almonds have nothing to do with saving animals. You activate an almond you're saving yourself, not an animal.) Anyway. Because of where I grew up and when, I was lucky, I had opportunities. Like we all have had. To meet like-minded people, to get together, educate, organise, to be here on a freezing Saturday.

What do you think it's like living in Corowa? Or Merungle Hill?

38% of households in Corowa live on less than 800 bucks a week. 33% below 600 bucks a week. And this is households, actual whole families. And not students doing an art degree and living in a sharehouse in Camperdown. This is a place where 30% of people leave school at the end of year 10.

So what? You did that too. Yeah, but you're here, look around us. Sure it's expensive and cut-throat and Mike Baird makes you go to bed at 10pm every night. Or the casino. But you've got opportunities. These people kind of don't. Or they're kind of not being told about them.

Of course, that's just the people who were born there. Some abattoirs have up to 70% foreign workforce, subcontracted to the places and a whole bunch on 457 visas and secondary visas, which offer no security, leaving them open to abuse and getting ripped off because without that job, it's hard to stay in the country. And of course as a result there's been reports of those workers being paid even less than the dwindling home grown workforce.

Of course in these places, the horrible stuff doesn't just happen at work. It's not just a lack of opportunities, it's downright unsafe. There's a map on the NSW Govt website that has broken NSW into local government areas, and coloured them in darkening shades of blue depending on the level of domestic or family violence there.

That's a messed up place to live. There's nothing else to do, you don't have the escape of cities or universities, you're more prone to violence or having violence done to you. There's nothing to do, you're getting angry bored and violent, And then, guess who's hiring?

But those companies that own the slaughterhouses don't care about their workers. They go just above cows and lambs and pigs and chickens on the list of stuff they can abuse to make more money.

You've heard the stories. All the jobs requiring any "talent" are now done with machines. You're just standing there chopping or gutting or on some other brutal part of the line. And the line has to keep moving, 24 hours a day. And faster and faster.

We are rightly outraged when we hear stories of animals not being "correctly killed" (as if there is such a thing), or lying there dying while the blood of their brother and sister animals drips on them from overhead. But forget about the animals, these places don't even care if their workers get hurt.

Injuries cost money. REPORTING injuries costs money. There are signs that say "Zero injuries in a week and you get a free BBQ". Which is a whole new level of wrong in itself.

So I guess what I'm saying is. Yes, I'm with you, I want violence and cruelty towards all animals to stop.

All animals. One thing about becoming vegan the way I did is that I learned how to educate myself. For example I learned that being vego isn't enough, so went vegan. But I also learned that if you care about animals, you gotta care about humans. Because we're animals too, and a lot of us, for very similar reasons to our non-clothes wearing and non speech-talking animal friends, are being exposed to cruelty and violence.

Meat-eating people like to use that argument "If you close the slaughterhouses, what will you do with all the animals."

And sure, we'll have to work that out (although I reckon the animals will be okay. They get on remarkably fine without us), but what about the humans? The workers who, basically through no fault of their own, are inside those killing buildings. Pushed inside in a figurative sense almost the same way a cow or pig is literally, and forced to be a part of that bloody machine. With all the physical and mental problems that go along with it.

We can't even treat our returned soldiers properly when they come back from a war. These people are shooting, killing, slicing, boiling, skinning and eviscerating living things all day long, until they themselves are spat out at the end of their usefulness.

People who learned their trade on oil rigs or coal mines have skills that can be used on solar farms, or wind turbines or a giant hydro-electricity plant - they've got a use in a future utopia. But what about the women and men in slaughterhouses? What the heck are they gonna do? Put a bolt through a potato? Boil the skin off a pumpkin? Actually that could be useful...

Anyway, we all know why we're here. We are chanting loudly. But the thing is vegans can sometimes be very focussed on the horror they're fighting and forget that there are other humans wrapped up in it who are affected. And it can make us look a little bit like dicks.

And the thing is, we don't need to look like dicks.

Because, as it's becoming clearer and clearer, we've got the upper hand. And they're getting scared. The best pie in Australia, as awarded three days ago, is a vegan vegetable curry pie! Officially the best, according to some, non-vegan website. Did you see Kochie's reaction on Sunrise? Sure he's a greedy commercial TV shill, but he was outraged. Because we're getting the message across. Last year the best burger in America was also vegan. People are realising that being compassionate does not mean being boring, or earnest, or being a prick about it. Being compassionate and cruelty free means living a great and full life, and simply wishing the same for all living things.

So, let's close the slaughterhouses, we all know that's the right thing to do, and more than likely will happen. But let's remember when we talking and chanting and marching about saving animals, to include ALL the animals. To include ALL of us. Cheers!