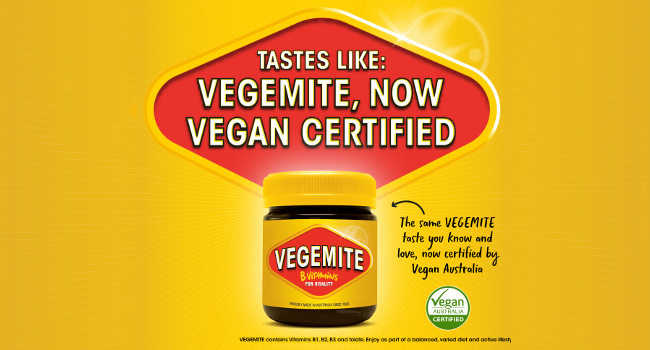 The Vegan Australia Certified program has added an Australian icon to its fast-growing list of certified brands with Vegemite announcing on World Vegan Day its participation in the program.

Vegemite passed the rigorous certification process by ... doing absolutely nothing to its recipe! More Australians can proudly declare Vegemite as their favourite spread now that it is officially vegan. Truth be told, it always has been, but now it's been fully certified by Vegan Australia.

"To keep Vegemite relevant today, it needs to appeal to all Australians. With over 10 per cent of Australians choosing a vegan or vegetarian-based diet, it's important that they can still enjoy the nation's favourite spread - so we sought official certification from Vegan Australia," said Matt Gray, Senior Marketing Manager, Vegemite.

Vegemite is just the latest in a growing list of companies that are choosing to certify their products with Vegan Australia. Over 500 Australian products have now passed the strict certification criteria to be able to use the Vegan Australia Certified logo.

Many brands are choosing Vegan Australia Certified to give their customers confidence that their products have passed the highest standard of certification and are free from animal products, are not tested on animals and have been made without using animal products in the production process.

Research conducted by Roy Morgan has found that the trend in vegetarian eating continues to grow, with 2.5 million people in Australia (12.1% of the population) now eating all or almost all vegetarian. That's an additional 400,000 individuals choosing meat-free meals in Australia since 2016 alone! This works out to 1 person deciding to eat less meat or go meat-free every 5 minutes!

Vegan Australia welcomes any product to seek certification, even those products assumed to be vegan. Certification removes any doubt and tells consumers that the brand cares and is passionate about a better future.

Vegan Australia certifies a range of vegan products including food, beverages, alcohol, fashion, cosmetics, cleaning products, vitamins and even menu items from restaurants. If you are interested in certification for your business, learn more about the Vegan Australia Certified program or get in touch with Vegan Australia.