Vegans stand up to the meat industry at hearing 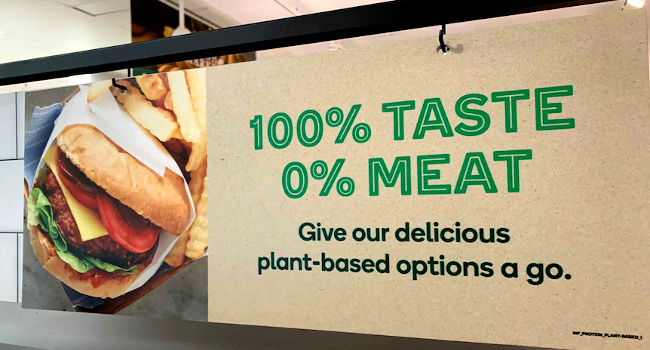 Vegan Australia was proud to join seven other vegan and animal rights groups invited to present at a Senate hearing into labelling of plant based alternative products. The other groups speaking were No Meat May, Australian Vegans, Purpose with Profit, Vegan NSW, Animal Defenders Office, Animal Justice Party and Animal Liberation Queensland.

All presentations and answers to questions were of the highest quality, intelligent and well researched. Below is the presentation made by Greg McFarlane on behalf of Vegan Australia. You can view a recording of the full hearing here. Read Vegan Australia's full submission to the inquiry here.

I thank the committee for the opportunity to present today.

The Australian animal agriculture industries breed, raise and kill over half a billion animals each year for food. Most of these farmed animals have not reached maturity when killed.

The sad thing is that all this suffering and killing is for no good reason. Humans have no need for any animal products and in particular are able to live healthily on a plant based diet. This is the view of most national health bodies, including the Australian Dietary Guidelines.

Given this background, I will now turn to the main question of this inquiry, which is whether current labelling laws protect consumers from misleading claims about plant based alternatives.

Looking at the evidence, Vegan Australia has concluded that the laws as they are now do adequately protect consumers in this area. The view that the current laws are sufficient is also held by independent, neutral bodies, such as the ACCC, the CSIRO, Food Standards Australia New Zealand, the George Institute for Global Health at UNSW and even the Australian Food & Grocery Council. Plant farming bodies such as GrainCorp see plant based alternatives as a growth opportunity and do not call for a change in the law.

We base the view that current laws are adequate on the fact that current Australian Consumer Law prohibits businesses from engaging in conduct that is likely to mislead consumers and that businesses can not make false claims about goods or services.

We also note that no plant based alternative products on the market claim to be animal based. In fact, their selling point is that they are not made from animals. They all clearly state on the packaging that they are "plant based", "vegan", "meat free", etc. This suggests that current laws and practices are adequate.

We support honest labelling. If there are any plant based products that have misleading labelling they should be be dealt with under the current laws.

However, it appears that many in the animal agriculture industries believe that the laws are inadequate and should be changed, in particular by prohibiting meat and animal descriptors and images being used on plant based products.

The current food labelling code takes a sensible approach to using English words and changing this code may have unintended consequences. Just like people do in regular English, the food code takes into account the context of labelling. For example, a confectionery product can be labelled "Bananas", even though it contains no bananas. Ginger beer is not considered a beer. Soy milk and soy ice cream are not considered dairy products. Peanut butter is allowed. Even Allen's Milk Bottles is okay, even though it is neither milk nor a bottle. In these cases the labels are unlikely to mislead because the context is clear. This is true for all plant based alternatives that I have seen.

One of the activities that Vegan Australia runs is a vegan certification program, with products from small businesses, from large well known Australian brands and from multinational corporations. These companies see that Australians are increasingly seeking out plant-based foods as part of their everyday shopping.

One example of these businesses is an established Victorian meat production company that has now developed a range of plant-based alternatives. To quote from their website, this company "prides itself on being a nimble, progressive business that is at the forefront of consumer trends and the latest product innovation."

Their products, including burgers, mince and patties, are sold in major supermarkets. This is a family-based meat production company who are taking advantage of changes in consumer patterns, rather than trying to fight them.

Finally, I would like to point out that nearly all support for changing the labelling laws comes from vested interests, mainly from the animal agriculture industry itself which hopes to gain from any change. Some plant farming bodies, such as GrainGrowers, while generally supportive of plant based alternatives because of the benefit it may have to their members, also call for a change because they want to protect their sales of grain as a feed source for farmed animals.

It is hard to avoid the conclusion that the real goal of those calling for change is to prop up their profits in animal industries that are suffering from a decline in consumer interest and to obstruct the rapid growth in popularity of plant-based alternatives and of a new industry with a vision of the future.

I thank the committee for their time.