Vegan talks to be highlight of Animal Activists Forum 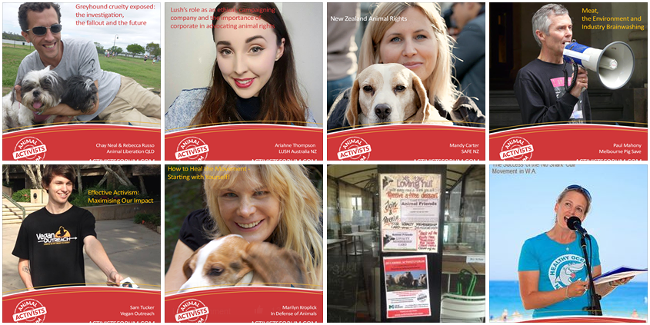 The annual Animal Activists Forum has always been a strong advocate for veganism and this year is no different. Held in Melbourne from 10 to 11 October 2015, the forum will feature a number of talks specifically about vegan advocacy. With over 30 talks over two days there will be something for everyone. We mention just a few below.

James Aspey, who in 2014 took a 365 day vow of silence to raise awareness for animals and promote peace over violence, will talk on "The Power of Vegan Activism".

Kym Staton, founder of the very successful Sydney Vegan Club, will share his experiences of vegan advocacy in his talk "A Vegan Australia by 2025".

Amanda Benham, vegan nutritionist, will talk about "Selling veganism: how can we use sales and marketing theory and techniques to get better at promoting veganism?"

Jeff Perz will give a talk: "Francione's Abolitionist Approach to Animal Rights applied to Australian Campaigns". He will discuss why animal welfare law campaigns and all other single issue campaigns are harmful to animals, and why achieving a critical mass of ethical vegans is the only action that will contribute to ending all animal use.

Sam Tucker will discuss the methods used by Vegan Outreach, an international organisation which hands out leaflets at universities, reaching about 1 million students every semester.

Bruce Friedrich, from Farm Sanctuary, will give a talk "Veganism in a Nutshell: The health, environmental, human rights, and animal rights/protection arguments for veganism".

Greg McFarlane, from Vegan Australia, will discuss what will happen if we all go vegan, looking at how the economy, employment, land use, food security, environment and other areas would be impacted by Australia moving to an agricultural system where no animals or animal products are used.

Hurry, as tickets are on sale for just a few more days, until Tuesday 6 October 2015. Associated events, organised separately, include a day trip to Edgar's Mission, a "day of action" on the Friday before and a Saturday social dinner at Bocskai Hall, catered with tasty vegan food.