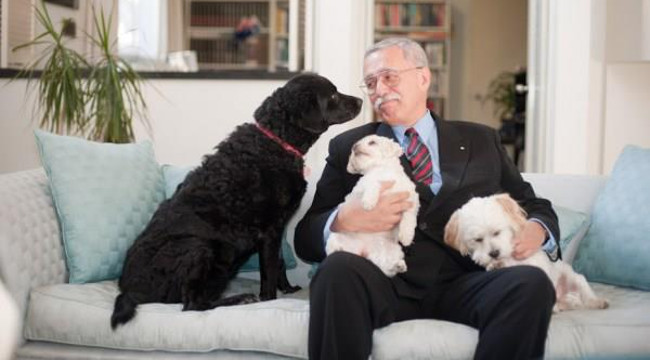 “In their capacity to suffer, a dog is a pig is a bear is a boy.” ~ Philip Wollen

When it comes to helping animals, there is a small number of Australians who tower above the rest. One such towering figure is Philip Wollen. After an immensely successful career as a merchant banker, Wollen became a vegan and effective altruist, and proceeded to donate 90 percent of his amassed wealth – much of it to animal causes.

A major turning point in Wollen's life was when, as part of a work contract, he visited a slaughterhouse. In the screams of the animals, he recognised the screams of his father as cancer ate its way through his body. At this point he “realised that when we suffer, we suffer as equals. Screams are identical from any species and in any language.”

To vegans, he is probably best known for his speech at a debate on the topic “Animals Should Be Off The Menu”, hosted by the Wheeler centre. His speech passionately implored all people to extend compassion to all animals – to cease abusing and exploiting them for food and clothing. It was widely considered, by people supporting both sides, to be the highlight of the debate.

His contribution to improving the plight of animals extends much further than this one well regarded speech. The Winsome Constance Kindness Trust, which Wollen named for his mother and grandmother, provides funding and support to small charitable projects that “punch above their weight”, including innumerable causes in support of animals. His contributions have helped to protect farmed animals, companion animals, and wild animals (both in captivity and in the wild) in Australia and around the world. Wollen's aim is to die broke, after giving away his wealth to charitable causes.

One of his more innovative ideas was the establishment of Kindness House, located in the Melbourne suburb of Fitzroy. Kindness House offers premium office space free to worthwhile charities, having, among others, hosted such charities as the Jane Goodall Institute, Sea Shepherd Conservation Society, the animal sanctuary Edgar's Mission, the Coalition for the Protection of Racehorses, and the Wilderness society. This allows the charities to reduce their expenditure on administration, and instead focus their resources on action, activism, and advocacy.

He also funded the Earthlings trilogy. The first film, Earthlings, released in 2005, continues to change the way countless people think about human-animal relations and has inspired many to go vegan. The second film, Unity, released earlier this year, was a powerful reminder that we need to re-imagine our position on this planet. The third and final film, Beings, slated for release in 2020, promises to continue this strong tradition.

In a profile of Wollen, The Age described his philosophy “Radical Kindness”; Wollen rejected this, asking, "What could be more radical than killing?" Instead he practices ahimsa, “non-violence to any living being”.

Wollen has had a number of awards bestowed upon him for his charitable works. He is a recipient of an Order of Australia Medal, the Australian Humanitarian Award, was Australian of the Year Victoria in 2007, is an Honorary Fellow of the Oxford Centre of Animal Ethics, UK, and received an Adelaide University Distinguished Alumni Award.

Through his works, he will have helped animals more than most of us could ever imagine, and that is a mark of true wealth.

On Tuesday, 3 November, 2015, the group Vegans in Toowoomba will host an event at which Philip Wollen will be speaking about his enduring passion for helping animals, followed by a screening of Earthlings, and a Q&A session.

See the event for more details.