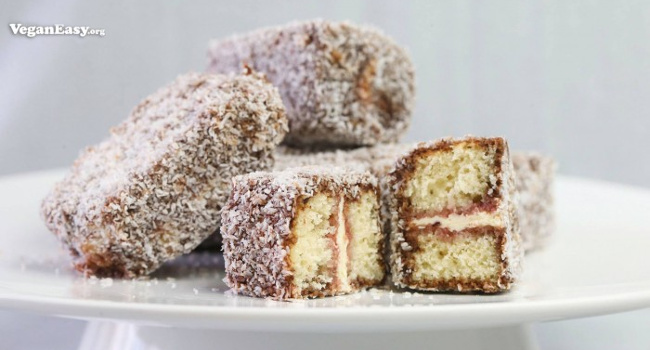 Australia Day is coming up and what better way to enjoy it than to bake some vegan lamingtons to share.

The lamington is an Aussie culinary icon and sharing vegan lamingtons with your non-vegan family and friends is a great way to do a bit of vegan advocacy. You could even give them some information or ask them to watch Dominion.

No matter how  you spend it, we wish you a happy vegan Australia Day. Ignore the ads about eating baby sheep and feel encouraged by the growing acceptance of veganism in Australia. More people are googling "vegan" than ever before, record numbers are signing up to Veganuary, more vegan products are available in more places, especially in fast-food outlets and supermarkets, and the topics of veganism and animal rights are in the media everywhere. What a positive start to 2019!

Here is a simple vegan lamington recipe from Vegan Easy.

Sponge, raspberry jam and vegan buttercream wrapped in a delicious coating of chocolate and coconut.

Notes: Make a simple vegan buttercream by whipping Nuttelex, vanilla extract and icing sugar to taste till light and fluffy.

You can make a simpler version of these lamingtons by leaving out the jam and buttercream layer in the middle.

Click here to see this vegan lamington and other recipes at Vegan Easy.