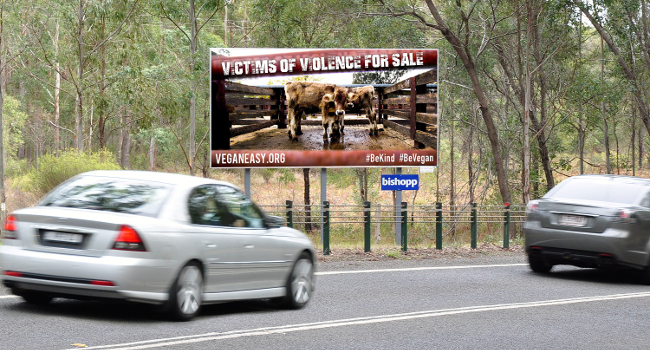 After two successful billboard campaigns in the Toowoomba region, the group Vegans in Toowoomba, spearheaded by Marilyn Orr and Renata Halpin, have undertaken a more ambitious task: erecting a billboard near 12 major agricultural towns around the Darling Downs over 12 months. “The purpose of the billboard is help people make the connection: that animals are truly victims of violence” said the organisers on the indiegogo page. “We are dedicated to continue educating this agricultural fish bowl (pardon the pun) through strategically placing this billboard on these busy roads filled with animal trucks.” The first six months of the campaign has already been funded, and now they are seeking help to fund the second half of the campaign.

The Darling Downs is a significant hub of animal agriculture, and this is set to increase in coming years. Oakey Beef Exports is planning a $60 million expansion to double production, while Tong Park Piggery is preparing to grow from 9000 to 13000 sows on site, making it the largest in Queensland, among other expansions. The organisers of the campaign are aiming to fight the complacency of the region. “The cattle trucks travel these rural roads constantly, but they are invisible to travellers. We want people to make the connection with these trucks and the calf on the billboard, and hopefully take this connection through to the supermarket, to make kinder choices” said Ms Orr.

Despite the strong presence of animal agriculture in the region, Toowoomba has become markedly more vegan friendly in recent years. Toowoomba’s first vegetarian cafe opened only two years ago, however Toowoomba now boasts two vegan-friendly vegetarian restaurants and one recently opened all vegan cafe. Coupled with a significant increase in vegan options at non-vegan restaurants and supermarkets, Toowoomba is a substantially more vegan friendly city than it was in 2013, when the first billboard campaign began.

The campaign has already had some measurable success, thanks to data obtained from Animal Liberation Victoria’s VeganEasy.org, to which the billboard directs people. In the first 3 months of the campaign, the number of people taking the Vegan Easy challenge in the south east corner of Queensland was 335 compared to just 200 people for the entirety of 2016, almost a 7 fold increase.

The campaign has stirred some controversy in the local community. “In the first few weeks Bishopp’s [the billboard advertising company] received a complaint from a farmer, and another farmer complained in a closed vegan Facebook group!” Ms Orr explains. However, the response has been mostly positive: “Mainly though we've had positive comments that we’ve come across in vegan groups on Facebook, and in Vegans In Toowoomba of course.”

Support the billboard campaign on indiegogo