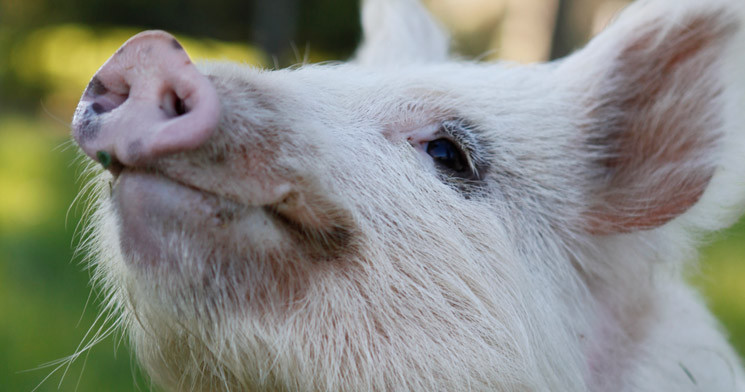 Vegan Australia rejects the assertion by Australian Pork that "It is often said that bacon is the meat that will tempt vegetarians to follow the carnivorous path back to sal(i)vation. And this is the week to do it."

"The suggestion that this week people should encourage those who eschew animal products to consume bacon is disappointing and shows a limited understanding of the issues involved," said Greg McFarlane, Director of Vegan Australia.

"While we understand that some people may enjoy the taste of bacon we believe that taste should not be the only factor in considering who/what we eat. There are far more important aspects than taste, such as the cruelty and death inflicted on the animals we are eating, the impact on the environment, the impact on our health and the impact on the world's hungry," said McFarlane.

"Pigs have the capacity to experience emotions, feel pleasure and form strong social and family bonds. All these are impossible on the majority of Australian farms, where pigs are denied the opportunity to roam freely, denied mental stimulation and are often subjected to surgical procedures such as tail docking and castration without anesthetic. Ultimately these sentient, social animals pay with their lives for our desire for a tasty treat. You may consider bacon to be a tasty morsel, but to the pig, whose body the bacon comes from, it is life itself.

"Australian Pork has avoided highlighting the real cost of bacon production on the pigs and on the environment. Piggeries produce large amounts of methane (a leading greenhouse gas) and other forms of pollution. Pigs are involuntarily one of the oceans' biggest predators, along with cows. Humans' use of pigs as "food" is killing the oceans and the planet.

"There is also a health cost to those who consume bacon due to its high saturated fat and salt content. Fortunately there are plenty of delicious, healthy vegan alternatives to all animal products.

"It is now clear that there is no need for humans to consume pigs or any other animals to be healthy. In fact, avoiding animal products can have many health benefits. The use by humans of animals for food or any other purpose is not ethical and Vegan Australia is calling for an end to all animal use," said McFarlane