This Australia Day do something great - go vegan! 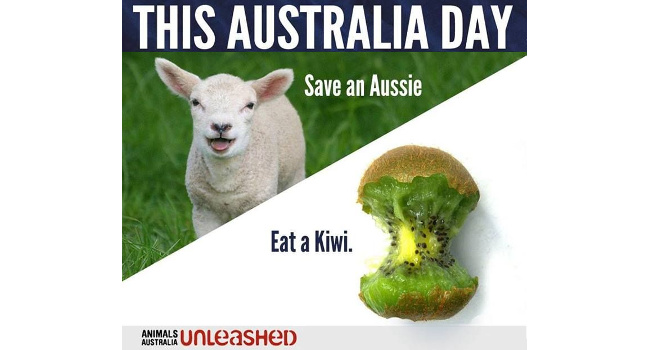 Vegan view: Chris McMullen looks at the Australia Day lamb ad campaigns and relates this back to veganism.

As Australia Day approaches many of us will be feeling a patriotic itch ready to be scratched. Australians across the country will soon be firing up their barbecues, relaxing with a cold beverage and enjoying catching up with friends and family. Among the festivities of the day, lots of us will also eat some form of lamb, the consumption of which has become a popular ritual on this day. In fact, thanks largely to extensive MLA marketing campaigns, the consumption of six-month-old lambs is seen almost as our patriotic duty.

Australians are responsible for upwards of 600 million animal deaths for food annually. If we factor in aquatic life and all its collateral bycatch, that figure easily breaks a billion. Most of us can choose to eat something else but we don't want to because animal products offer a taste and convenience to which we've become accustomed. Trivial reasons compel us to continue killing animals. If we are reasonable, however, compelling reasons should convince us to stop. Our behaviours and beliefs are clearly steeped in tradition and habit, and this is the foundation I intend to challenge.

The word "sheep" is often used as an insult, generally directed at someone whom we consider a blind follower and who doesn't think for themselves. We fail to appreciate the irony when, every January we are told to consume the animal from whose namesake this insult was born, and we do so without thought or question.

Why is it that on Australia Day we target sheep more than other animals? One might argue that sheep farming laid the early foundations for our country's prosperity which helped make Australia what it is: industrious and fortunate. I am willing to agree on this point. But we must remember that accepting a claim as true says nothing of the ethical concerns therein, nor our consequent ethical obligations. Likewise, it's objectively true that humans have enslaved others for millennia - animal and human alike. It's also true that such atrocities gained international acceptance owing largely to an economic viability. Sacrificing the lives and wellbeing of others to satisfy our interests comes at a relatively little expense to us; the biggest cost being ethical - and, therefore, conveniently intangible. The fact that we benefit from exploiting others does not - indeed cannot - sanction those beliefs or practices.

If it is, in fact, the humble sheep to whom we owe some credit for our country's prosperity, shouldn't a more appropriate token of thanks be in order? Can we not show gratitude by abstaining from killing them? Evidently, we don't exactly consider sheep worthy of moral status. Like every other animal we exploit, they are seen largely as a means to serve our ends - not conscious creatures in and of themselves, with their own interests and desires - therefore, we value them only insofar as we can benefit from their exploitation. Our interests are self-serving.

Many species of animals, including those we routinely exploit, are sentient and, therefore, they experience their own lives subjectively. Philosopher, Tom Regan refers to animals and humans who share this quality as "subjects-of-a-life". Interests and preferences emerge from one's own subjective experience of life, some can be considered trivial, and others fundamental; the latter being of most importance, and including interests such as avoiding suffering. Most people believe that causing needless harm is morally wrong. Should someone needlessly harm an animal, they are allowing their trivial interest of causing harm to outweigh the animal's basic interest of not being harmed. It's easy to understand, yet we neglect to appreciate the obvious incompatibility between this moral belief and our day-to-day actions. We don't need to consume animal products to live, which means the harm and suffering we cause is brought about unnecessarily, and by our choosing.

If animals matter morally, as most people agree they do, then they deserve to have their interests taken seriously and to be free from unnecessary harm at our hands. Adopting a vegan lifestyle, where one boycotts the exploitation of animals - for food, clothing, and entertainment - is an important step toward achieving this. To go vegan is not to burden oneself with difficult restrictions and sacrifices. One need only discern habit from necessity; tradition from imperative; and justice from injustice - and make choices that reflect this understanding. When we oppose the commodification of animals, we are not simply acknowledging their capacity for sentience, their ability to suffer, or to feel joy; we are making a statement that says it's not acceptable to treat animals as if they are resources at our disposal.

For some barbeque-loving Australians, ethical arguments of this sort might appear too outlandish to take seriously, the ascription of moral status to a sentient animal might seem tantamount to drinking nonalcoholic beer. Indeed, when an idea seems absurd at face value, when it contradicts our most basic intuitions and assumptions, our first instinct is often to object, to ridicule, and to trivialise the idea. In situations like this, we should see our dismissive undertones as an enormous red flag. As people capable of thinking and reasoning, it's our intellectual duty to question our basic assumptions, and our moral obligation to reject any beliefs deemed ethically indefensible. Anything less is unbefitting of 21st-century humans living in an ever-changing, and progressive world.

As a reasonable person, you probably can't come up with many compelling reasons for why we should continue killing animals - that's because there aren't any. All we can do is appeal to tradition, to habit, to convenience etc., and these are simply not good enough reasons. So this Australia Day, I encourage you to give some serious thought to your actions and their consequences. Consider the poor lambs whose lives were ended because we enjoy the taste, and take the time to realise that killing a lamb is no more defensible than the unnecessary killing of any other sentient animal. This Australia Day, do something great, not simply for your country, but for the world and all its animal inhabitants. Go vegan, it's far easier than you might think.