The things we grow up with 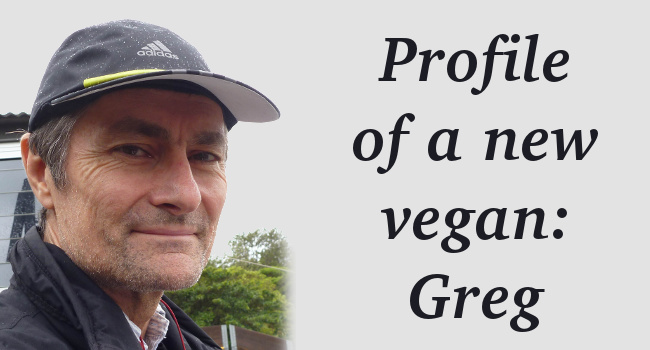 Profile of a new vegan: Greg Rostron began his vegan journey at age 60. Here is his vegan story.

I was not an overnight vegan. I always thought I should be eating more fruit and vegetables, so when around 4 years ago at age 60 I met an ethical vegan, I took the opportunity to listen to her explain to me why it was a good idea to do just that. It wasn't the health benefits that convinced me though. Over a period of 2 years of many in-depth discussions she gradually opened my eyes to the harm I was causing with my food choices. At first I stopped eating red meat, then chicken, followed by fish and the last to go were prawns.

What has amazed me on this journey is that as I look back on over 50 years as a non-vegan, I see the missed opportunities I had to ask where and more importantly how my food was produced. There were many times I could have questioned my food choices but chose to just 'go with the flow' of what everyone around me was doing. That is eating living beings that had been killed for the sole and unnecessary purpose of putting something on my dinner plate.

As a child we always had pets. Dogs, birds, chickens, guinea pigs, tropical fish and others I can't even remember. I was brought up to care for and respect those pets. On the other side I can vividly remember catching my first fish and leaving it on the hook to feel how it struggled on the line. We lived in country NSW for part of my early childhood. Images of my father trapping, killing and skinning a wild rabbit or of bringing home a joey after a kangaroo shoot at night. Of course every meal consisted of a piece of meat and some vegetables. I never thought to ask why we eat some animals and not others. It's just the way it was.

As an 18 year old I moved to Switzerland to study at university and spent the next 20 years there. I studied, worked and got married. As a foreigner I wanted to fit in and fell in love with the Swiss traditions of chocolate and cheese. Meat was expensive but I did love an occasional veal schnitzel. One day I visited a Swiss friend's hobby farm and he showed me around. As we went through the barn I saw a cow in a stall and asked where the calf was. He took me to another stall where the calf was kept and I asked why he wasn't with his mother? He said, well if the calf was kept with the mother it would drink all the milk and the calf will be sent to the slaughterhouse to make veal anyway. Despite being confronted with the reality of how the milk that made my favourite chocolate and cheese was made and where my veal actually came from, I walked out of that barn and chose to forget what I had seen. I mean who was I to question the way things were done in my adopted country? Of course what I saw that day does not even come close to how the modern dairy industry (mis-)treats its animals.

Before starting a family my wife and I undertook a road trip from Perth WA to Sydney NSW via Darwin and Cairns. We stopped at a place in the far north west of WA and from a hill just outside of town we had a great view of the town and ocean beyond. We noticed large cattle pens and could even hear the animals. As I now know, they were presumably destined for live export. My wife commented on how sad it made her feel to see and hear the animals like that. Encountering road kill was a constant part of the trip but I could never understand why I was seeing dead cattle at the side of the road in the far north where there were no cattle stations. Curiosity got the better of me and I asked at a road house. I wasn't expecting the answer. They told me that when the cattle are transported in those huge road trains, some die along the way and they are just dumped at the side of the road. I always thought that the cattle were cared for and treated well.

My family and I would visit relatives here in Australia every couple of years. A sister along with her husband and 3 small children had moved to the NSW north coast. They had some land and when we were there visiting my sister showed me a pin board which was full of photos of a cute calf they had bought some time ago. It had a name and was for a time practically the family pet. Then she opened a large freezer and said, "There he is now and I can't bring myself to eat any of it". Although I saw the cute photos, the meat in the freezer and I felt her deep sadness at the loss of a life simply so that her family could eat cheap meat, I shrugged my shoulders and moved on. Who was I to question her husband's choices for his family?

I used to love my fresh fish, lobster or crab from the tanks in a restaurant. When asked which one I wanted I always waved away and said whatever you choose is fine by me. I didn't want to have to choose and be responsible for which animal would be killed for my dinner plate. I always managed to ignore the reality of what the fish tanks meant for those animals that should never have been taken from the ocean in the first place.

So here we are at prawns. The final step in my transition to veganism. I loved my honey prawns at the local Chinese restaurant, a prawn salad or cooked prawns at Christmas. As a child we caught prawns in nets, put them in boiling water and ate them. Sure they moved around in the water but they made no sounds. No problem. At least until I saw a report on the ABC about the white spot disease affecting the prawn farms in Queensland. The reporter was interviewing a prawn farmer in front of a huge pond and it looked like the pond was alive. You couldn't tell what it was, almost like rain falling on the water and making tiny splashes. Then the reporter asked the farmer what the large truck was doing at the far end of the pond. He replied, "Oh, it's dumping chlorine in the pond to kill all the prawns and any white spot disease in there". Then I realised those tiny splashes you could see in the background were in fact the prawns jumping out of the water trying to save themselves from being poisoned by the chlorine. They suffered. I never ate a prawn again.

People choose to go vegan for many reasons. Environmental, health or animal cruelty. Animal cruelty and the environment easily top my list of reasons. I'm vegan now and could never go back to the way I was. My only regret is that it took me so long to get here and for so many years I never stopped to ask the hard questions.