The Optimism of Uncertainty 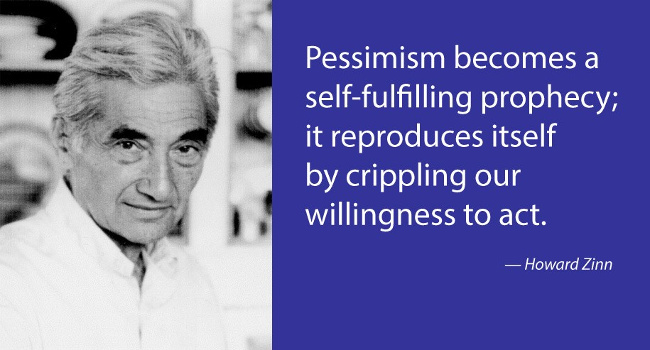 Although this 2004 essay by historian and social activist Howard Zinn is about human history and politics, it contains important lessons for veganism and vegan activists. It explains why we should be optimistic for the sake of all animals.

In this awful world where the efforts of caring people often pale in comparison to what is done by those who have power, how do I manage to stay involved and seemingly happy?

I am totally confident not that the world will get better, but that we should not give up the game before all the cards have been played. The metaphor is deliberate; life is a gamble. Not to play is to foreclose any chance of winning. To play, to act, is to create at least a possibility of changing the world.

There is a tendency to think that what we see in the present moment will continue. We forget how often we have been astonished by the sudden crumbling of institutions, by extraordinary changes in people's thoughts, by unexpected eruptions of rebellion against tyrannies, by the quick collapse of systems of power that seemed invincible.

What leaps out from the history of the past hundred years is its utter unpredictability. A revolution to overthrow the czar of Russia, in that most sluggish of semi-feudal empires, not only startled the most advanced imperial powers but took Lenin himself by surprise and sent him rushing by train to Petrograd. Who would have predicted the bizarre shifts of World War II: the Nazi-Soviet pact (those embarrassing photos of von Ribbentrop and Molotov shaking hands), and the German Army rolling through Russia, apparently invincible, causing colossal casualties, being turned back at the gates of Leningrad, on the western edge of Moscow, in the streets of Stalingrad, followed by the defeat of the German army, with Hitler huddled in his Berlin bunker, waiting to die?

And then the postwar world, taking a shape no one could have drawn in advance: The Chinese Communist revolution, the tumultuous and violent Cultural Revolution, and then another turnabout, with post-Mao China renouncing its most fervently held ideas and institutions, making overtures to the West, cuddling up to capitalist enterprise, perplexing everyone.

No one foresaw the disintegration of the old Western empires happening so quickly after the war, or the odd array of societies that would be created in the newly independent nations, from the benign village socialism of Nyerere's Tanzania to the madness of Idi Amin's adjacent Uganda. Spain became an astonishment. I recall a veteran of the Abraham Lincoln Brigade telling me that he could not imagine Spanish Fascism being overthrown without another bloody war. But after Franco was gone, a parliamentary democracy came into being, open to Socialists, Communists, anarchists, everyone.

The end of World War II left two superpowers with their respective spheres of influence and control, vying for military and political power. Yet they were unable to control events, even in those parts of the world considered to be their respective spheres of influence. The failure of the Soviet Union to have its way in Afghanistan, its decision to withdraw after almost a decade of ugly intervention, was the most striking evidence that even the possession of thermonuclear weapons does not guarantee domination over a determined population. The United States has faced the same reality. It waged a full-scale war in Indochina, conducting the most brutal bombardment of a tiny peninsula in world history, and yet was forced to withdraw. In the headlines every day we see other instances of the failure of the presumably powerful over the presumably powerless, as in Brazil, where a grassroots movement of workers and the poor elected a new president pledged to fight destructive corporate power.

Looking at this catalogue of huge surprises, it's clear that the struggle for justice should never be abandoned because of the apparent overwhelming power of those who have the guns and the money and who seem invincible in their determination to hold on to it. That apparent power has, again and again, proved vulnerable to human qualities less measurable than bombs and dollars: moral fervor, determination, unity, organization, sacrifice, wit, ingenuity, courage, patience - whether by blacks in Alabama and South Africa, peasants in El Salvador, Nicaragua and Vietnam, or workers and intellectuals in Poland, Hungary and the Soviet Union itself. No cold calculation of the balance of power need deter people who are persuaded that their cause is just.

I have tried hard to match my friends in their pessimism about the world (is it just my friends?), but I keep encountering people who, in spite of all the evidence of terrible things happening everywhere, give me hope. Especially young people, in whom the future rests. Wherever I go, I find such people. And beyond the handful of activists there seem to be hundreds, thousands, more who are open to unorthodox ideas. But they tend not to know of one another's existence, and so, while they persist, they do so with the desperate patience of Sisyphus endlessly pushing that boulder up the mountain. I try to tell each group that it is not alone, and that the very people who are disheartened by the absence of a national movement are themselves proof of the potential for such a movement.

Revolutionary change does not come as one cataclysmic moment (beware of such moments!) but as an endless succession of surprises, moving zigzag toward a more decent society. We don't have to engage in grand, heroic actions to participate in the process of change. Small acts, when multiplied by millions of people, can transform the world. Even when we don't "win," there is fun and fulfillment in the fact that we have been involved, with other good people, in something worthwhile. We need hope.

An optimist isn't necessarily a blithe, slightly sappy whistler in the dark of our time. To be hopeful in bad times is not just foolishly romantic. It is based on the fact that human history is a history not only of cruelty but also of compassion, sacrifice, courage, kindness. What we choose to emphasize in this complex history will determine our lives. If we see only the worst, it destroys our capacity to do something. If we remember those times and places - and there are so many - where people have behaved magnificently, this gives us the energy to act, and at least the possibility of sending this spinning top of a world in a different direction. And if we do act, in however small a way, we don't have to wait for some grand utopian future. The future is an infinite succession of presents, and to live now as we think human beings should live, in defiance of all that is bad around us, is itself a marvelous victory.

Source: "The Optimism of Uncertainty" in The Nation