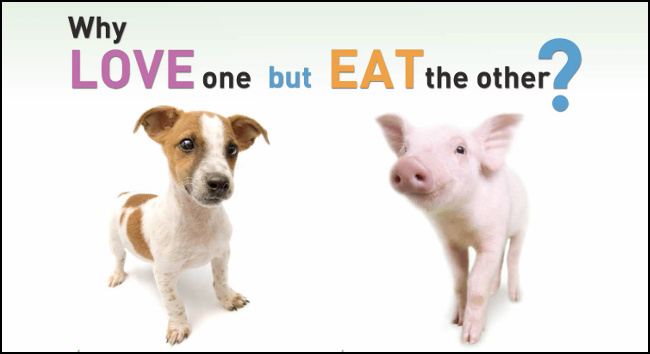 How do people justify "loving one, but eating the other"? In this special feature we look at the psychological research into how individuals can hold two contradictory beliefs at the same time.

Most people love animals and oppose cruelty to animals, and yet most people also eat meat. 63% of Australians live with companion animals, giving this country one of the highest rates of pet ownership in the world1. At the same time, Australians consumed 90.21kg of meat per person in 2014, one of the world's highest meat consumption rates2. These two behaviours are inherently contradictory. How to explain such inconsistency? The psychological concept of cognitive dissonance may help.

Cognitive dissonance is a phenomenon that appears in many aspects of human behaviour. An example is a person who highly values health, and knows that exercising is important for his health, but who lives a sedentary lifestyle. The internal discomfort of living incongruently to his beliefs is justified with thoughts that he is "too busy to exercise". Cognitive dissonance theorists would suggest that we make - often unconscious - rationalisations like this to assuage feelings of guilt.

In the case of animal "lovers" who eat meat, the dissonance they experience is also referred to as the meat paradox4, in which different animals are categorised as pets, wild animals or farmed animals. Many cultures and traditions deem it acceptable to slaughter certain animals for food, believing that those animals exist for that reason. Dr. Melanie Joy, a social psychologist and animal advocate, created the term "carnism", which refers to a belief system of people who choose to consume meat in the modern culture11. Carnists regard eating animals as normal, natural and necessary by categorizing certain animals as food objects and abstracting their reasoning or emotional capabilities.

Many people do not make the connection between what is on their plates and the animal it came from, such is the nature of modern food production, marketing and purchasing which hides the reality of farms and slaughterhouses. Only recently have some urbanised people become more aware of the ethical issues of animal exploitation. For some, this subject is taboo and they choose to ignore the horrifying facts10. One study posited that people tend to assign less emotions and reasoning capacity to animals raised for food. The study compared meat eaters and vegetarians, testing the theory that dehumanization is used as a strategy for moral disengagement. The results suggested that meat eaters ascribed less secondary emotions (guilt, anxiety, shame, loneliness, etc.) to traditionally edible animals than to the non-edible animals, while vegetarians did not5.

Other research, conducted in 2012, revealed that meat eaters reject the idea that animals used for human consumption have minds6, supporting the dissonance theory. Researchers demonstrated that meat eaters are motivated to deny animals minds when reminded of the link between meat and animal suffering, thereby reducing the negative associations in preserving their meat eating choice and cultural practices. That their ancestors have eaten meat for millennia, that animal protein is essential for health, or that it tastes good are other rationalisations which support the cognitive dissonance explanation for loving some animals and eating others8.

Behaviourists have observed that animals possess a wide range of emotions from joy, fear, love, despair and grief, to shame, embarrassment, jealousy and rage7. Dr. Jane Goodall described a chimpanzee's grief at losing his mother. The young chimpanzee withdrew from his group, stopped feeding and finally curled up and died where his mother had died earlier, behaviour that seems very "human".

Recognising the capacity for all sentient beings to experience emotions9 is surely sufficient reason to avoid causing suffering to animals. Regardless of whether an animal is cute and cuddly, it is deserving of a life free from exploitation, and being vegan is the only response to "loving animals" that is cognitively consonant.