Taking on discrimination against vegans 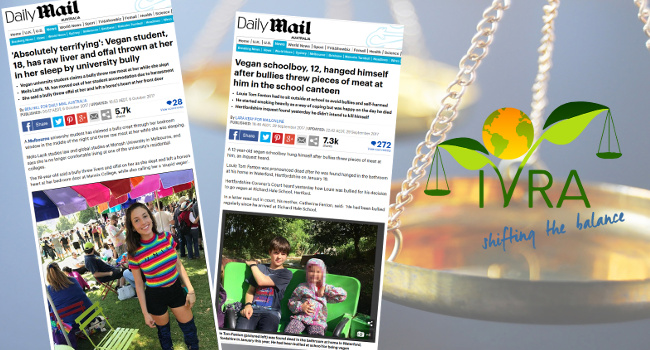 An interesting new trend has started which attempts to use human rights laws to advance the rights of animals.

The International Vegan Rights Alliance (now the Vegan Society's International Rights Network) was formed in 2012 and aims to advance the rights of animals by protecting the rights of people to live vegan. It also aims to protect the human interest of not being forced to participate in animal exploitation.

IVRA aims to raise awareness of the legal recognition of veganism and how vegans can be accommodated under the terms of International and European rights and equality legislation. Veganism is a "protected non-religious belief" under Article 9 of the European Convention on Human Rights. Veganism is also protected under the International Bill of Rights and the Universal Declaration of Human Rights, which Australia helped draft and signed. Vegans are protected under these documents because of the general right to live according to their own moral convictions.

One of IVRA's goals is to use this legal protection to support vegans who are suffering discrimination and unfair treatment because of their convictions. IVRA also makes legal challenges, such as against anti-vegan labelling laws.

IVRA promotes veganism in law and argues for the rights of vegans primarily because this gives effect to the moral standing of nonhuman animals.

Two recent cases of bullying of vegans have brought the importance of this work into focus. One, in the UK, involved the suspected suicide of a young school boy who was bullied by other students because of his vegan beliefs. The other case was of a young student in Australia who had to move out of her university accommodation after being harassed due to her vegan beliefs.

One case which is currently being supported by IVRA involves a university student in Scotland who is experiencing harassment in relation to her veganism and vegan activism from one of her teachers.

Other cases which have been reported to IVRA involve disputes where a person's veganism was threatened to be used against them. This includes child custody cases, where it was claimed that because one partner was vegan they should not have custody of the children.

There has been at least one case where vegans were barred for applying for a job, thus violating anti-discrimination laws. The employer changed the job ad after being notified by a vegan organisation.

There is also a case where a child who was born vegan has come under pressure to transition to vegetarianism whilst in the care of a local authority. Yet another case involves the lack of vegan food for a five-year-old in school.

IVRA is also challenging regulations that protect and promote the dairy industry in Europe, where words including "milk", "cheese", "cream" and "butter" can only be used to describe products that are made from "mammary secretions".

IVRA also organises the International Rights Network Conference, where vegan professionals from all over the world gather to discuss how vegans are supported by laws and to highlight the value that legal protection for veganism can bring to nonhumans. The next symposium will be in 2018 in Glasgow, Scotland.

Using the law and the legal system to advance the rights of vegans shows that the movement is maturing and starting to move towards a world where the rights of animals are protected.

The International Vegan Rights Alliance is represented in Australia by Greg McFarlane, director of Vegan Australia. IVRA is also looking for a legal representative in Australia. If you are a legal professional or know of someone who may be interested, please contact us.

This article appeared in the January 2018 issue of The Australian Vegan Magazine (page 16).