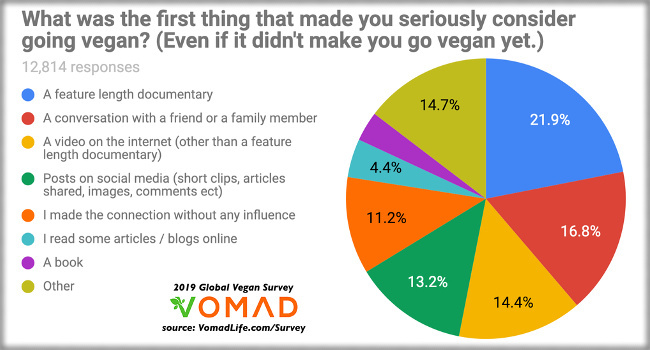 A survey of over 12,000 vegans has shown that a huge range of influences are at work in helping people become vegan. The answers to the question "What was the first thing that made you seriously consider going vegan?" were incredibly varied.

Some of the influences given were watching a documentary (such as What the Health, Cowspiracy, Earthlings, Forks Over Knives, Vegucated and Dominion), having a conversation with a friend or family member, watching a video on the Internet (such as Gary Yourofsky's speech, seeing graphic footage of animal farming, watching videos by James Aspey, Earthling Ed, Joey Carbstrong, Mic the Vegan and Bite Size Vegan and the video Dairy is Scary), seeing posts on social media, reading articles online (such as PETA, mainstream news and Plant Based News), reading books (such as The China Study, Eating Animals, Animal Liberation, Skinny Bitch, Diet for a New America, How Not to Die and Meatonomics), reading newspapers and magazines, through vegan outreach (such as leafleting, animal rights protests, Cube of Truth and other street activism), attending a speech or lecture, going to vegan festivals and other events, via TV and radio programs and participating in a vegan challenge (such as Veganuary and Vegan Easy).

More subtle but effective influences included vegans leading by example, by making great food and looking healthy. Some people were influenced by their children not liking cruelty to animals.

Topics that led people to veganism included ethics for the animals, health and the environment.

Over half of the survey participants said they had influenced or convinced someone else to be vegan. This was done by having a discussion with them, showing them good vegan food, recommending a documentary, video or book, sharing posts and commenting on social media, having discussions at outreach events such as Cube of Truth, creating videos, blogs, memes, recipes, art and books and bringing them to a lecture, speech or other event. Some people said chalking, graffiti and stencilling were the most effective ways.

People learn in different ways and respond to different things. One of the strengths of the vegan movement is the breadth of techniques used by vegans to reach out to people. The greater the reach of our campaigning, the faster we will bring about a vegan world, for all animals. Vegan Australia supports these methods and more. And everyone can get involved effectively, no matter where they are.