Support grows for 13 charged over open rescue of suffering hens 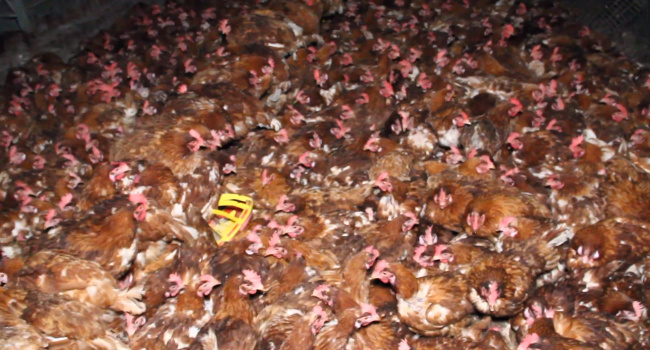 On 21 June 2018 an open rescue attempt was made to save hens suffering under horrific conditions on a "free range" egg farm in Lakesland, NSW. The rescue was attempted after footage was released over a week earlier of thousands of hens struggling for their lives, with many found dead and others drowning in their own excrement and gasping for breath. Despite pleas to the RSPCA to respond to the plight of the hens, the RSPCA did nothing. 13 rescuers were violently arrested and charged, with police falsely claiming the rescuers had killed hens.

Watch this video of the rescuers' attempt to save the hens and their violent arrest by the police.

Read the full story below.

The 13 rescuers are set to appear before Picton court on 14 August 2018. They have had a very strong response to their call for help with legal fees but need more to defend these false charges. Please help the Lakesland 13. Rescuing injured or dying individuals should never be a crime.

Donate to help the Lakesland 13

Following an anonymous tip from a member of the public, footage has been released of thousands of hens struggling for life in a free-range egg laying facility in Lakesland, NSW. The footage highlights the appalling conditions in which the hens live, without food or water, lying amongst the bodies of those already deceased.

The whistle-blower who discovered the gruesome scene immediately contacted the RSPCA who informed them that there was nothing they could do. They were referred to the local police, who also failed to arrive at the site.

"I was shocked to see the appalling state of these hens and the piles of dead bodies", stated Catherine Kelaher of NSW Hen Rescue. "I was unable to approach the facility without feeling the cracking of bones underfoot as there were so many dead. Although this footage is particularly heinous, this type of scene is common in the egg industry where hens such as these are treated as nothing but a commodity."

Catherine requested that all who see the original footage contact the RSPCA (02 9770 7555) and demand action to be taken.

Isy Veira, from the animal liberation group Legion DX Sydney, demanded that the facility be shut down immediately, the owner prosecuted and for all hens to be rescued and given medical attention. NSW Hen Rescue made it clear they were able to provide all of this as they are a registered charity. "Free range does not mean free from cruelty or harm" Isy clarified.

On Thursday 21 June 2018, over a week after the original complaint had been made and after the failure of RSPCA to respond to the plight of the Lakesland Hens, up to 30 members and supporters staged a protest outside the Lakesland Farm. RSPCA inspectors were on site and when seen leaving the site and questioned by rescuers on the state of the hens they refused to offer any information on the hens or release them to the care of the rescuers. At this point negotiations failed and an open rescue attempt was made to release these hens from the horror of this farm.

13 people were arrested and charged with animal cruelty. Police have falsely claimed that rescuers killed hens despite the fact these girls were found drowning in their own excrement and gasping for breath as clearly demonstrated in the footage.

The RSPCA allowed the farmer to continue operating despite the atrocities and neglect to these hens. They instructed him to depopulate the shed by 1500 birds, meaning they will be sent for slaughter. Negotiations were started by the RSPCA with the farmer, however he refused to allow the hens to be rescued. The RSPCA did not use their powers to seize these birds.

See footage of "depopulated" shed here, after thousands were killed:

Legion DX Sydney stated "We will be a voice for the hens who were starved and deprived of their basic needs to then only be slaughtered despite our repeated attempts to save them. We will make sure that they are not forgotten and we will use this opportunity to outreach the local area."

Donate to help the Lakesland 13