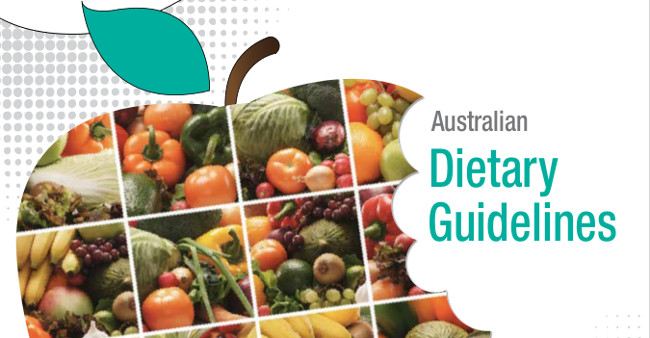 Vegan Australia is campaigning for the new Australian Dietary Guidelines to promote a vegan diet.

In a combined submission with the Vegan Society NSW on the new draft Australian Dietary Guidelines (2011), Vegan Australia has called for the Guidelines to include consideration of the wellbeing and rights of animals and not to discriminate against the great number of Australians who for animal rights, environmental, health, religious and other reasons, have already adopted plant-based diets.

Dietary guidelines are important - they form the basis for a wide range of decisions made by health professionals, policy makers and food manufacturers. Because of this, it is important that dietary guidelines clearly state that humans can thrive on a vegan diet.

In its submission, Vegan Australia has called for the Australian Dietary Guidelines to include consideration of the wellbeing and rights of animals and not to discriminate against the great number of Australians who for animal rights, environmental, health, religious and other reasons, have already adopted plant-based diets. A compassionate, sustainable and healthy diet must be the goal of the new guidelines.

Read the full submission below as well as the media release.

The Vegan Society NSW and Vegan Australia believe that review of the Australian Dietary Guidelines is an opportunity to reflect on our use of animals for food, and consider alternative diets that promote compassion and put an end to the unnecessary suffering and killing of animals for food consumption. It is important to remember that animals suffer and are killed for many of the "foods" recommended in the dietary guidelines. All the while, the production of livestock is particularly greenhouse gas intensive, and many Australians over-consume animal products to the detriment of their own health.

The Vegan Society NSW and Vegan Australia strongly recommend that the Australian Dietary Guidelines include consideration of the wellbeing and rights of animals. We would like to see the guidelines incorporate guidance for Australians who wish to put an end to the unnecessary, yet widespread, suffering and killing of animals, and facilitate a transition to sustainable and compassionate, vegan, plant-based diets.

Importantly the Australian Dietary Guidelines and the Australian Guide to Healthy Eating should acknowledge and support the great number of Australians who for animal rights, environmental, health, religious and other reasons, have already adopted plant-based diets. The current guidance on vegan diets can only be described as discriminatory to these groups of Australians.

The draft dietary guidelines regrettably serve to reinforce the completely unnecessary abuse and suffering of animals who are raised and killed each year to be eaten.

Emphasise the benefits of plant-based diets

We note that the decision to follow a plant-based diet need have no detrimental health impacts and the dietary guidelines should provide more support and encouragement in this area. The American Dietetic Association (ADA) states that, "vegetarian diets, including total vegetarian or vegan diets, are healthful, nutritionally adequate, and may provide health benefits in the prevention and treatment of certain diseases. Well-planned vegetarian diets are appropriate for individuals during all stages of the lifecycle, including pregnancy, lactation, infancy, childhood, and adolescence, and for athletes." The ADA's 2009 position paper on vegetarian and vegan diets references more than 200 studies and papers to support this conclusion, and studies continue to show that plant-based diets can aid in reversing type 2 diabetes, cardiovascular disease and some types of cancer. [1]

We note also that the Harvard School of Public Health recommends the consumption of at least nine servings of fruits and vegetables per day to obtain protection against cancer, cardiovascular disease, diabetes and other chronic disease. [2]

We believe that the Australian public deserves to be educated about the benefits of vegan diets and be supported by government by way of better information about how to adopt plant-based diets and increase their overall consumption of fruits and vegetables in the dietary guidelines. We recommend dietary advice reflect a sustainable balanced vegan diet such as the PCRM's Power Plate. [3]

We suggest also, that the guidelines should help to draw attention to the wide variety of foods and beverages available that can be included plant-based diets, including:

Particularly, care should be taken not to present veganism in a negative way. In the current Guide to Healthy Eating, the use of the question 'Is vegetarianism healthy?' and the highlighting in red of 'Care needs to be taken if you restrict animal foods in your diet', as well as highlighting the 'shortcomings' of vegan/vegetarian diets sends a very negative message. This needs to be revised and replaced with more positive language.

The Vegan Society NSW and Vegan Australia recommend that the NHMRC exclude any studies on calcium and osteoporosis funded by the Dairy Industry. We strongly recommend that only studies coming from independent sources are used in the decision making process. We are concerned that the studies funded by the dairy industry are not always carried out in the public interest, and are likely to favour results that promote the consumption of dairy foods.

We wish to point out that plant foods contain a host of nutrients that are essential for bone health (e.g. magnesium, vitamin K, potassium, boron), and there is no conclusive evidence to suggest that dairy foods are superior to plant foods, whether it be for calcium intake [4], or dietary protein. [5] The important factors to concentrate on in the effort to prevent osteoporosis include physical activity, vitamin D exposure, and calcium intake from healthy food sources, rather than focussing on dairy consumption: 'Instead of drinking milk, individuals should focus on bone building through exercise, spending time in the sunshine to promote vitamin D production, eating lots of fruit and vegetables, and getting calcium from plant sources. Calcium from plant foods and supplements tends to be better absorbed'. [6]

The risks of climate change are well documented and include significant impacts from higher temperatures, changed precipitation and increased intensity of extreme weather events. Australia's food supply is extremely vulnerable and at risk due to the changes in rainfall that are likely to occur due to climate change. This has important implications for the health and wellbeing of all Australians and should not be ignored.

Therefore, it is our view that the dietary guidelines should provide guidance on the optimal diet to ensure the health and wellbeing of Australians both now and into the future, including mitigating as much as possible the impacts of climate change. We strongly believe that the guidelines, in their current format are woefully inadequate, as they do not consider the way a food is sourced or its method of production.

We are very concerned that the draft guidelines and the Guide to Healthy Eating do not provide any advice to the public on sustainable food choices and environmentally friendly food practices. In particular, we are extremely concerned that the guidelines have failed to consider the carbon emissions associated with food production, packaging, transport, storage, waste and disposal.

The Vegan Society NSW and Vegan Australia recommend that the NHMRC incorporate the overwhelming evidence of the sustainability and climate change impacts of our current food and dietary practices, and vice versa.

We strongly dispute the claim that "available Australian and international evidence is insufficient to be able to provide advice on the environmental impact of specific food items or brands". The statement is completely inaccurate and is a disservice to the Australian public.

Incorporating environmental sustainability into the Guidelines has the potential to be an important strategy in reducing Australia's overall greenhouse gas emissions, helping to mitigate climate change, and therefore, improving the health and wellbeing of current and future generations of Australians.

There is strong evidence that greenhouse gas emissions can be reduced through reductions in meat and dairy consumption. [8] In 2009 the Swedish government put out guidelines for climate friendly food choices that recommended to Swedish citizens to reduce their meat consumption as a way of reducing greenhouse gas emissions. The guidelines specifically recommend eating less meat, explaining that such action will lower a person's carbon footprint. [9]

We note that our members are extremely concerned about the influence that food industry lobby groups have had on the formulation and decision making around these guidelines. For example, we are aware that MLA has been fighting hard to get any reference to a limitation on meat consumption removed from the guidelines and have people on the ground in Canberra trying to influence this process.

We wish to point out that though the draft guidelines include the following comment in regards to meat consumption: "to enhance dietary variety and reduce some of the health risks associated with consuming meat, up to a maximum of 455g per week (1 serve or 65g per day) of lean meat is recommended for Australian adults" - in the Australian Guide to Healthy Eating, there is no indication that people are recommended to limit their intake of red meat.

Also, language is important and in the draft guidelines there is guidance on 'Lean meat and poultry, fish, eggs, nuts and seeds, and legumes/beans' which is referred to as 'Lean meat and alternatives' in short hand. We reject the assumption that meat be the default option for sourcing protein requirements and thus reject this category title.

We believe that the meat and food industry has had too much influence on the development of these guidelines as evidenced by the removal of all reference to carbon emissions and environmental sustainability. We believe that this is a deliberate attempt to stop the NHMRC from incorporating these factors in their decision making processes because of the negative influence it may have on their industries.

This submission is also available as a PDF file.