Submission calls for an end to exhibiting animals 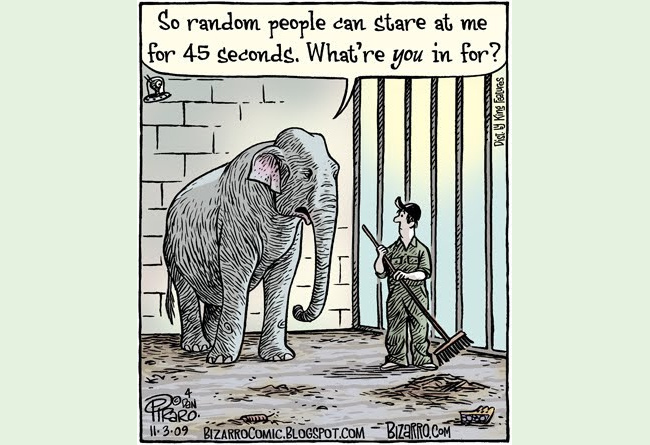 Vegan Australia has made a submission to the public consultation into the proposed welfare standards for "exhibited animals" (animals kept in zoos, aquariums, etc).

The submission is a call to reframe the standards so they become a plan to end the practice of exhibiting animals, by:

The full submission is below.

Vegan Australia thanks the Australian Ministers responsible for Primary Industries for the opportunity to participate in the public consultation process for the proposed Australian Animal Welfare Standards and Guidelines for Exhibited Animals. We are responding to the request by the Ministers for views from interested parties about how the proposed standards and guidelines will ensure the welfare of exhibited animals.

Vegan Australia is a national organisation that educates the public about animal rights and veganism and also presents a strong voice for veganism to government, institutions, corporations and the media. Vegan Australia envisions a world where all animals live free from human use and ownership. The foundation of Vegan Australia is justice and compassion, for animals as well as for people and the planet.

The public consultation of the Australian Animal Welfare Standards and Guidelines for Exhibited Animals (the "standards" in this document) is an opportunity to reflect on our use of animals for display, education and entertainment. We note the detail and care that has gone into creating the standards, including the sections on food, water, environment, enrichment, handling, enclosures, safety, security, health and emergencies. However, the view of Vegan Australia is that animals should not be used for exhibition at all and these standards should only be used in the interim until such use has ended. The main goal of the standards should be to completely end the practice of exhibiting animals.

The stated purpose of the standards is to ensure the welfare and security of exhibited animals. Vegan Australia submits that the animals' welfare and security would best be met by them not being exhibited and the standards should be used to protect their interests only. We believe that animals value their own life and body and have an interest in continuing their existence and avoiding suffering. They have the right to be treated with respect and justice and not to be treated as property.

Regardless of the care taken by the staff and the "enrichment" provided, keeping animals for exhibition in artificial environments often causes them unnecessary distress. They are imprisoned for a lifetime far from their natural habitat with its space, rich diversity, family and freedom. Social relationships are often broken. The requirements of many animals are unable to be met in an artificial environment and this results in stress and abnormal behaviour such as rocking, swaying, endless pacing, aggression, changes in sexual behaviour and even self-mutilation.

We note that the standards explicitly do not apply to:

Vegan Australia also opposes these uses of animals. Again, the welfare of these animals is best ensured by not using them for these or any other purpose.

The claimed benefits of exhibiting animals (mainly in zoos and aquariums) are entertainment, education and conservation. These benefits in no way outweigh the suffering, lack of freedom, disruption to social relationships, and other tolls of captivity, caused to the individual animals concerned.

The first "benefit", entertainment, is not a strong enough reason to deny these animals everything that is natural and important to them. The fact that it gives us a small amount of viewing pleasure is not enough to keep animals locked up.

The claimed educational benefits from viewing enclosed animals are overstated. In fact, we believe that one of the main messages people gain from attending a zoo is that domination over and objectification of other species is socially acceptable. A better alternative to seeing animals in a zoo is to view them in their natural habitat. This may require more effort than a trip to the zoo, but will result in a much deeper understanding of the individuals concerned and their relationship with their natural environment. There are also many other ways to learn about animals, such as nature documentaries, interactive videos, lectures and books. These educate in a more meaningful and lasting way and give a deeper understanding and respect of animals and the amazing things they can do that no human could ever do.

The final claimed benefit of zoos is conservation of endangered species. Most species kept in zoos are not endangered and so this benefit does not apply to animals of those species. The few species that are endangered may be better conserved by keeping them protected and close to their native habitat while efforts are made to rehabilitate the habitat and re-establish the population in the wild. In fact, most individual animals kept in zoos, endangered or not, would arguably prefer a life of freedom regardless of what the outcome is for the survival of their species.

We note that the terminology used in the standards parallel that used for human prisoners and prisons. This includes sections on containing inhabitants in enclosures and holding enclosures at secure facilities, using restraints (including physical, chemical and behavioural), escape, capture and transportation. There are additional sections dealing with the acquisition and disposal of animals, euthanasia and reproductive management. However, an important distinction between human and non-human animal prisoners is that the non-human animals have not committed any crime. They are held against their will for the comparatively trivial reasons of entertainment and "education".

It is the view of Vegan Australia that animals have more rights than just the right to "cope with the conditions". If we applied the same definition to human welfare, it would allow a person to be kept as a slave, as long as he/she were "coping with the conditions in which he/she lives". This ignores the right of the person to be free. This shows what is missing in these standards - that animals have a right to be free and not be kept for the benefit of humans.

In making this submission, Vegan Australia represents the significant number of Australians who believe that humans do not have the right to use animals in any way. These Australians express their views by eating a plant-based diet, avoiding animal products in other goods such as cosmetics and clothing, and refusing to support the animal entertainment industry, including horse racing, dog racing, zoos and circuses. Not using animals in these ways is not just a personal choice, it is an ethical decision. Many of these Australians advocate for animals and educate others. The values and expectations of these Australians should be taken into account when creating laws such as these standards.

The main change that should be made to the standards is to reframe them so they become a plan to end the practice of exhibiting animals. This should be based on the following three steps.

For these remaining animals who have now become the responsibility of humanity to care for, the proposed standards may be useful to ensure they are looked after to the best of our abilities. The focus should not be on the exhibition of animals but on their welfare while in our care. The zoo and aquarium industry must transform itself from a prison to a refuge, where the rights and welfare of individual animals are given the highest priority.

The standards should be enhanced by adding sections covering the details of stopping wild capture, stopping captive breeding, releasing animals into the wild, rescue of animals held captive in sub-standard conditions and rehoming. The "Reproductive management" section should be modified so that breeding of captive animals is prevented.

The section on "Interactive programs" should be modified to only allow public interactions with domesticated animals for humane education purposes. This is to take into account places such as farmed animal sanctuaries, which house rescued farmed animals. The primary goal of these sanctuaries is to be "forever homes" for the animals. A secondary goal of some of these sanctuaries is to educate the public about the individual nature of each animal and why they should not be used for food. Display of the animals is of minor importance. Some of these places do not invite the public to view the animals at all while others do invite the public at times. An example of such a sanctuary is Edgar's Mission in Victoria. This is home to over 300 rescued animals. Visitors are introduced to individual animals and told his or her story. Animals are not bred on these sanctuaries.

To strengthen the standards, Vegan Australia recommends that the proposed Guidelines be promoted to enforceable Standards where this is in the interest of the animals.

The Council of Australian Governments (COAG) principles state that when deciding on a regulatory process, the option that generates the greatest net benefit for the community should be adopted. It is the view of Vegan Australia that non-human animals should be included in our moral community and that the best option for this wider community would be to end the practice of exhibiting animals.

In summary, we propose that the standards be reframed so they become a plan to end the exhibition of animals by putting the interests of these animals above all other interests.