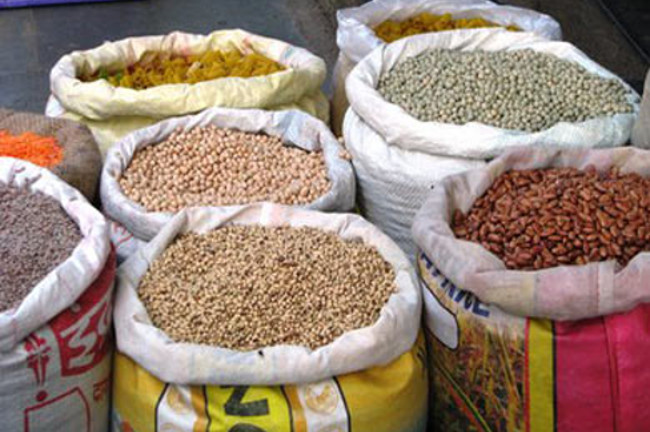 Animal agriculture causes more than the suffering of animals. It also impacts people throughout the world, especially the powerless and the poor, in a number of ways.

"Every day forty thousand children die in the world for lack of food. We who overeat in the West, who are feeding grains to animals to make meat, are eating the flesh of these children."
- Thich Nhat Hanh

Over 20 million people will die this year as a result of malnutrition and approximately one billion people, mostly rural women and children, suffer chronic hunger. A lot of food that is currently fed to animals could instead be used to feed the world's hungry people directly. To produce just one kilogram of beef protein, it takes at least seven kilograms of grain and other plant protein to be fed to a cow. If crops grown for livestock production were instead used for human consumption, over 10 times more people could be fed. Eighty percent of starving children live in countries that actually have food surpluses - the children remain hungry because farmers use the surplus grain to feed animals instead of people. To make the situation worse, sometimes developing nations grow animals to sell to wealthier nations because this is more profitable than growing fruits, vegetables and grains that could feed local people. References: Feast or Famine: Meat Production and World Hunger by Mark Hawthorne, Immoral maize: how meat-heavy diets are pricing sub-Saharan Africa out of nutrition, Global hunger: The more meat we eat, the fewer people we can feed.

The environment and human rights

Animal production is a major cause of environmental destruction, including global warming. In all countries, a healthy environment is a pre-condition for the enjoyment of many human rights, such as life, health, and wellbeing. Global warming will have most impact on countries which are already suffering in terms of human rights and hunger.

The rights of indigenous people

Major causes of deforestation are growing cattle for meat and growing crops to feed farmed animals. Throughout the world, deforestation is often in areas occupied by indigenous people and their rights and interests are often ignored.

Effect on workers in slaughterhouses

Human Rights Watch states that working at a slaughterhouse is "the most dangerous factory job in America". Slaughterhouse workers suffer from illness or injury many times more than workers in other manufacturing jobs. As well as the physical injury slaughterhouse workers suffer, there are also the disturbing psychological costs, as detailed in A Slaughterhouse Nightmare: Psychological Harm Suffered by Slaughterhouse Employees and the Possibility of Redress through Legal Reform. Workers suffer from a loss of compassion, allowing them to do their job of killing without caring. Natural instincts to empathise with the pain and death of animals are suppressed. This desensitisation to suffering in animals is linked to a higher propensity for committing violent crimes towards humans, particularly domestic abuse. For more on this topic, see Creating Killers: Human Tolls of Slaughter.

The effect of the normalising of violence towards non-human animals on acts of violence towards humans has been the subject of some scientific research. For example, the article Vegan Diet Impacts California Prison, says that the results of adopting a vegan diet were "amazing" and a number of the comments are from ex-prisoners backing up the findings.

This normalisation of violence towards non-human animals allows us to disconnect the flesh on our plates from the animal whose body it is.  This undermines our capacity for compassion and teaches us that it is OK to oppress the voiceless and weak to fulfil our desires. This topic has been explored by Dr Will Tuttle in his book, The World Peace Diet, where he considers how this unconscious learnt behaviour can then transfer into other areas of human life and kindle historical atrocities such as human slavery, conflicts and war.

In this context denial refers to the way meat eaters may fail to resolve the paradox between being opposed to cruelty to animals (as 99% of people say they are) while at the same time continuing to eat meat, which is the result of enormous suffering to animals. On thinking about this internal conflict, some may change their behaviour and become vegan, some may deny that the animal they ate had the capacity to suffer, while others do not resolve the paradox and thus may be harmed by this unresolved internal conflict. See Conflicted Meat-Eaters May Deny That Meat-Animals Have the Capacity to Suffer, Study Finds. Related to the psychological term "cognitive dissonance". Also related to Carnism.

For a more detailed discussion of many of these issues, see Discussion Paper: The Link Between Meat Production and Human Rights by Aloysia Brooks.

"For as long as men massacre animals, they will kill each other. Indeed, he who sows the seed of murder and pain cannot reap joy and love."
- Pythagoras