Response to article on whale hunting 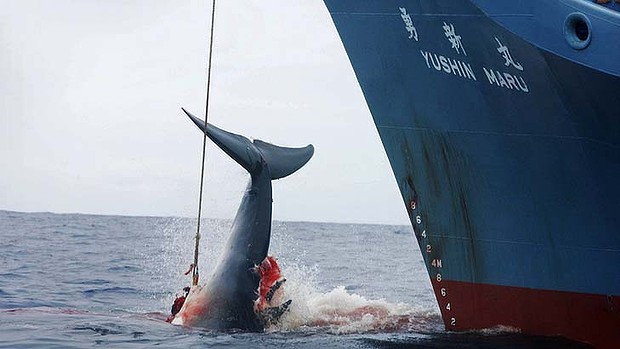 Today there was an intriguing piece in the Fairfax media, No sacred cows: let me eat whale for dinner, by potential vegan, Michael Evans. In it he discusses the inconsistency of eating some animals, like pigs and cows, and loving others, like dogs and horses. He also brings up the concept of cognitive dissonance, where he states that he is uneasy at the sight of animal slaughter and yet loves "his" pork and chicken leg.

He concludes his piece with "the only truly logical argument appears to be not to eat or even domesticate any animal". In other words, he knows the logical argument behind veganism. But then he asks "And how realistic is that?". He just needs to bring his behaviour in line with his beliefs. Below is the email we sent to him.

Thanks for your article in today's Fairfax media. We agree with much of what you say, in particular that there is no moral distinction between killing a whale, a dog or any other animal. As Jeremy Bentham said, "The question is not, can they reason? nor, can they talk? but can they suffer?" and we know that all animals suffer when they are bred, farmed and slaughtered for food.

So your statement that you need to consume meat "to ensure my survival" is really the only justification for causing harm and death to animals. Unfortunately this is just not true. You can thrive very well without any animal products and the Australian government and the Medical Journal of Australia backs us up on this.

Just recently, Australia's peak health body, the NH&MRC, recognised that a vegan diet is a viable option for all Australians. Australia's top health experts are now in agreement with those in the USA and Canada that well-planned vegan diets are safe and healthy for all age groups. And last year the Medical Journal of Australia published a large scale review which also states that a vegan diet is suitable for any stage of life.

So you are totally correct when you say "the only truly logical argument appears to be not to eat or even domesticate any animal". And the answer to your question "And how realistic is that?" has been answered "yes" by millions of vegans worldwide.