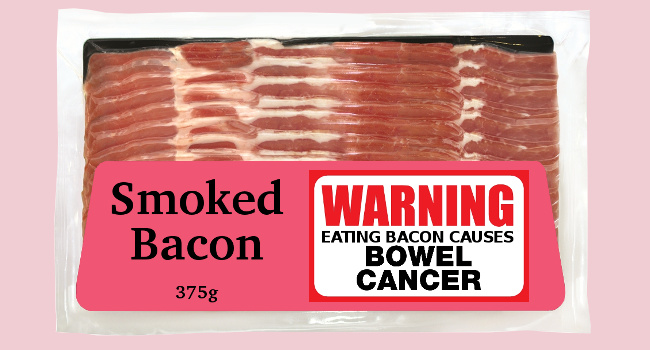 Processed meat is linked to cancer1. Evidence now clearly shows that eating bacon, ham, sausages and other processed meat increases the risk of bowel cancer32. Even the World Health Organisation agrees. It has declared that processed meat is "carcinogenic to humans" and "eating processed meat causes colorectal (bowel) cancer"14. It may also cause cancers of the oesophagus, lung, stomach and prostate31.

Recently, the Animal Justice Party and Vegan Australia have launched campaigns to raise public awareness of this issue. As part of this, we will be delivering a letter to the Australian Minister for Health, Greg Hunt, calling for mandatory health warnings to be placed on processed meat products. The letter is signed by a number of health professionals along with vegan and animal rights organisations.

This campaign follows a recent call by the Center for Science in the Public Interest for the US Department of Agriculture to label processed meat products, warning the public that frequent consumption may increase the risk of bowel cancer17.

In the current political environment, where the animal industries have significant power over government, a campaign to put cancer warnings on processed meat may seem unlikely to succeed. But there are two encouraging examples from the recent past where there has been great success in just a short time: the campaigns against smoking and against lead in petrol.

It has only been 53 years since the US Surgeon General issued the now famous 1964 report linking smoking with illness and death. Nine years later, in 1973, the first health warnings on cigarette packets, "Smoking is a health hazard", were introduced in Australia. Since that time all tobacco advertising and sponsorships have been banned, taxes on tobacco increased, graphic labelling has been added to tobacco products and extensive anti-smoking advertising campaigns broadcast. Smoking rates have more than halved since the 1970s and are continuing to fall.

The campaign against lead in petrol began in the 1960s due to growing evidence of the very harmful effects of lead on children's health and learning. While the dangers of leaded petrol were long accepted by doctors and governments, and substitutes known, oil companies continued to make it and successfully lobbied decision makers to delay regulation. The timing of the complete phasing out of lead petrol varied greatly between countries, with Japan in 1986 and Australia in 2002. It has now been phased out in nearly every country of the world.

What can we learn from these two examples? The main lesson is that we can win!

Both these campaigns were won against very well-funded commercial vested interests who delayed the positive outcomes for years often by misleading and deceptive "scientific" studies. We should expect strong resistance from the animal industries and even collusion with politicians and government bureaucracy. But this can be countered by presenting a clear case backed by solid scientific evidence. We need to be creative in how we educate the public to gain their support. And we need to keep working hard and be patient.

Campaigning for health warnings on processed meat is deliberately a very targeted demand. It does not cover all animal products, it is not calling for a ban and it is focused on health and not animal rights. Some people may just shift their consumption to other types of meat. However, by concentrating on this one small demand, we increase the chance that it will be accepted and implemented by the Department of Health. The science is settled and the government has the responsibility to clearly warn people about potential health hazards in the foods they eat.

Why is the campaign for health warnings on processed meat important to the vegan movement? Researchers have found that the most common reason Australians give for eating meat is that they need to eat it to be healthy. This view is backed by the powerful meat industry. Vegans know that it is untrue, but we do not have the money or power to widely promote this. If this campaign is successful it will have a huge impact. At no cost to us, every packet of ham or bacon on display in the supermarket would become a mini billboard sowing the seeds of doubt in people's minds that "meat is healthy". Instead, they would get the message that "(processed) meat causes cancer". It would begin to undermine one of the main barriers for people to become vegan.

Success in this campaign is just the beginning. It would set a precedent for future campaigns against all animal products, based on evidence from human health, the environment and animal sentience.

This article originally appeared as "Campaign calls for cancer warnings on processed meat" in the November 2017 issue of The Australian Vegan Magazine (page 16).