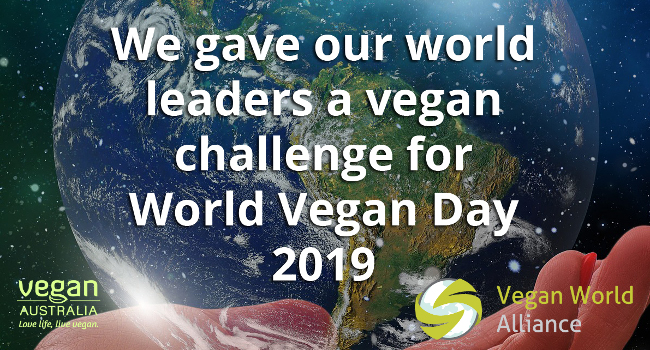 In an unprecedented world first, four member organisations of the Vegan World Alliance are challenging the leaders of their countries to try vegan for a month, starting on 1 November, World Vegan Day. They want their leaders to commit to a low carbon way of life and to educate their government and the public about the huge negative impact animal agriculture has on the environment.

Director of Vegan Australia, Greg McFarlane said "World resources are being stretched to beyond their limits, so we have to start living within our planetary resource budget as soon as possible. Going vegan is an easy way to start this."

"We are urging the Prime Minister to try vegan for the sake of the environment, for future generations and of course to prevent the needless suffering of animals", McFarlane said.

Lack of vegan options is no longer an issue. With a plethora of vegan foods readily available in supermarkets, cafes and restaurants, there is even more reason to go vegan.

The health benefits are clear, with many cancers being prevented, heart disease and type 2 diabetes reversed and people often finding greater energy, better recovery times and good weight loss as side effects of going vegan.

Vegan Australia urges everyone to join with the Prime Minister and visit www.veganeasy.org to join the 30 Day Vegan Easy Challenge.

See below for the letter to the Prime Minister.

The world is in the middle of a climate emergency. Our young people fear for their future. Now more than ever we need strong leadership from our heads of government to tackle climate change.

It may surprise you to learn that animal agriculture is one of the largest drivers of greenhouse gas emissions. To avoid climate catastrophe we need to not only reduce fossil fuel use but also transition away from animal farming.

An international campaign by Vegan World Alliance is bringing attention to a crucial step towards reversing climate change. As part of this campaign, Vegan Australia is calling on you to join other elected officials in shifting to a vegan diet, starting on 1 November, World Vegan Day.

Please visit www.veganeasy.org to join the 30 Day Vegan Easy Challenge. You will receive helpful tips and advice to guide you to a compassionate, environmentally friendly and healthy way of life.

By accepting this challenge, you will show that you are part of the solution to one of the most fundamental threats the world has ever faced.

A vegan diet is probably the single biggest way to reduce your impact on the planet, not just greenhouse gases, but global acidification, eutrophication, land use and water use.

There are a number of factors causing our atmosphere to become carbon saturated and act like a giant greenhouse: fossil fuels, deforestation, acidification of the oceans, animal agriculture. There are many things that need to be done to tackle climate change, for example, government legislation to hold corporations accountable for their emissions.

Unfortunately, our way of life and economy have increasingly become reliant on animal agriculture, which is a major offender. However, the fact remains that according to innumerable reports the global population must drastically reduce their dependence on animal agriculture if we want a sustainable planet for the future. That's individual accountability, and it's not only a solution that everyone can easily incorporate, it's a necessity.

The reality is that ruminant animals produce a lot of methane during their digestion processes, and our planet is out of balance with ruminant animals being bred in excessive numbers. This is driving our methane emissions higher, and methane is a greenhouse gas we can take effective action against.

Methane is a short-acting greenhouse gas, unlike carbon dioxide, the effects of which we are currently witnessing, which comes from what we put in the atmosphere 30 years ago. We have been pumping more and more carbon dioxide into the atmosphere since then! Our need to ACT is absolute and dire!

The world can feed more people without animal agriculture. The United Nations has stated that

Veganism is growing and more people are turning to it as they see the need to reduce our resource use. It takes far too much land to produce animals as food for humans, to the extent that human actions threaten more species with global extinction now than ever before.

The world is a beautiful ecosystem that relies upon balance to keep it working in a manner that is safe for life. We have destroyed that balance, and we are doing very little to address the imbalance. We need those wild spaces, we need to reforest, we need to stop polluting, we need to stop using fossil fuels.

But there is one simple act each person can take right now. It requires no special training or legislation, only a will to do it: Change to a vegan diet.

Time is of the essence, we have a very short time frame to initiate lasting changes that will enable us to turn this crisis around. We have to drastically reduce our fossil fuel consumption, plant more trees and grow more plants in general. We have to stop cutting down the remaining trees and we have to reduce our resource use so we only use up one planet's worth, not multiple like is currently the case in many countries. Animal agriculture is an industry that can no longer be sustained. The planet is close to a tipping point, a point of no return. Scientists started discussing the problem of climate change over a century ago. We have had many decades of talk. Now we need action.

For the sake of humanity, we urge you to take up the challenge starting on World Vegan Day. It is vital that people shift away from animal agriculture to decrease the overwhelming demand on the planet's resources, for their own health and to end animal exploitation. You can lead the way.

We ask you to sign up to the 30 Day Vegan Easy Challenge by visiting www.veganeasy.org. You will receive regular email updates containing tips and advice to guide you to live a more compassionate, healthy and eco-friendly life.

We know that such a challenge can seem daunting on your own, so we encourage you to ask your cabinet to join you and truly become world leaders by being the first government to try vegan.

We are more than happy to meet up with you and answer any questions you may have.