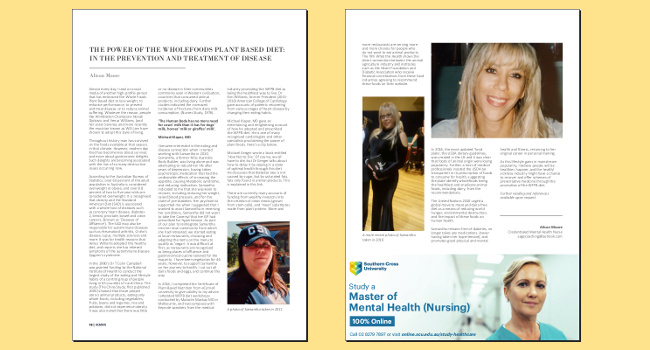 Almost every day I read on social media of another high-profile person that has embraced the Whole Foods Plant Based diet to lose weight, to enhance performance, to prevent and treat disease, or to reduce animal suffering. Whatever the reason, people like Wimbledon Champions Novak Djokovic and Venus Williams, (and her sister Serena), and more recently the musician known as Will.I.am have chosen to adopt this style of living.

Throughout history man has survived on the foods available at that season, in that climate. However, modern day food has become less about survival, and more about gastronomic delights. Such delights are becoming associated with the rise of so many destructive issues occurring now.

According to the Australian Bureau of Statistics, over 60 percent of the adult population in Australia is considered overweight or obese, and over 8.8 percent of two to five-year-olds are considered overweight. It is recognised that obesity and the Standard American Diet (SAD) is associated with a whole host of diseases such as coronary heart disease, diabetes 2, breast, prostate, bowel and colon cancers, (known as 'Diseases of Affluence'). The SAD may also be responsible for autoimmune diseases such as rheumatoid arthritis, Crohn's disease, lupus, multiple sclerosis and more. It was for health reasons that Venus Williams adopted this healthy diet, and reports she has relieved symptoms of the autoimmune disease Sjogren's syndrome.

In the 1980's Dr T Colin Campbell was granted funding by the National Institute of Health to conduct the largest study of the eating and lifestyle habits of a control group of people living in 65 counties of rural China. The study (The China Study, first published 2005) showed that those people who ate no animal products, eating only whole foods, including vegetables, fruits, beans and legumes, rice and potatoes, did not experience obesity. It was also noted that there was little or no disease in their communities commonly seen in Western civilisation, countries that consumed animal products, including dairy. Further studies indicated the increased incidence of fractures from dairy milk consumption, (Nurses Study, 1976).

'The Human Body has no more need for cows' milk than it has for dogs' milk, horses' milk or giraffes' milk'. - Michael Klaper, MD

I became interested in the eating and disease connection when I started working with Samantha in 2010. Samantha, a former Miss Australia Body Builder, was living alone and was attempting to rebuild her life after years of depression, having taken psychotropic medication that had the undesirable effects of increasing the appetite, causing Metabolic syndrome, and reducing motivation. Samantha indicated to me that she was keen to recover, including reducing her weight, raised blood pressure, and for the state of pre-diabetes. Her psychiatrist supported me when I suggested that I wanted to assist Samantha in reversing her conditions, Samantha did not want to take the Coversyl that her GP had prescribed for hypertension. As part of our plan to reintegrate Samantha into her local community from which she had retreated, we started eating at local restaurants, choosing and adapting the items on the menu to qualify as 'vegan'. It was difficult at first, as restaurants are recognised as being places of affluence and gastronomical cuisine tailored for the majority. I have been vegetarian for 46 years, however, to support Samantha on her journey to health, I cut out all dairy foods and eggs, and continue this way.

In 2016, I completed the Certificate of Plant-Based Nutrition from eCornell university to give validity to my advice. I attended whole food plant based (WFPB) diet workshops conducted by Malcolm Mackay MD in Melbourne, and two symposia with Keynote speakers from the medical industry promoting the WFPB diet as being the healthiest way to live. Dr Kim Williams, former President (2015- 2016) American College of Cardiology gave accounts of patients recovering from various stages of heart disease by changing their eating habits.

Michael Klaper, MD gave an entertaining and enlightening account of how he adopted and prescribed the WFPB diet. He is one of many recognised cardiologists and other specialists proclaiming the power of plant foods. Here's a clip below.

Michael Greger wrote a book entitled 'How Not to Die.' Of course, we all have to die, but Dr Greger talks about how to delay it by staying in a state of optimal health through this diet. He discusses that diabetes two is not caused by sugar, but by saturated fats, fats only found in animal products.

There are currently many accounts of funding from wealthy investors into the creation of clean meats (grown from stem cells), and 'meat' substitutes made from plant protein. More and more restaurants are serving more and more choices for people who do not want to eat animal products. The film What the Health shows the direct connection between the animal agriculture industry and institutes such as the Heart Foundation and Diabetic Association who receive financial contributions from these food industries agreeing to recommend these foods on their website.

In 2016, the most updated 'food plate', the USDA dietary guidelines, was created in the US and it was clear that foods of animal origin were losing popularity. Further, a host of medical professionals insisted the USDA be transparent in its prescription of foods to consume for health, suggesting the plate identify wholefoods being the healthiest and eradicate animal foods, including dairy, from the recommendations.

The United Nations 2010 urged a global move to meat and dairy-free diet as a means of reducing world hunger, environmental destruction, and the impact of these foods on human health.

Samantha remains free of diabetes, no longer takes any medications, (never having taken her hypertensive), and promotes good physical and mental health and fitness, returning to her original career in personal training.

As this lifestyle gains in mainstream popularity, I believe people will be healthier, happier, and the health/sickness industry might have a chance to recover and offer schemes of preventative medicine through the promotion of the whole food plant based diet.