One of the best decisions I have ever made 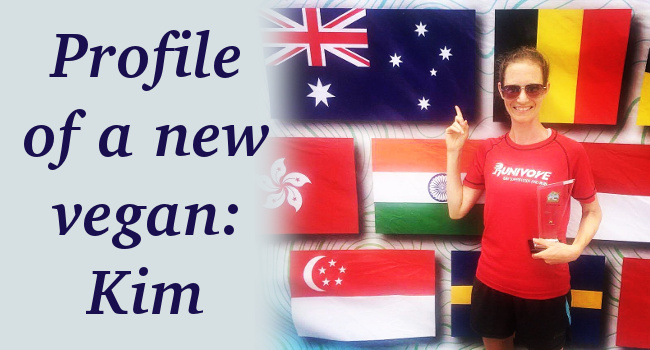 Profile of a new vegan: Kim has been running for 10 years and recently won the women's title in the Asia Trail Master competition. Here is her vegan story.

I grew up a serious omnivore, eating anything and everything and not thinking twice about it. I grew up surrounded by meat (with three generations of butchers in the family), and all meals contained an animal product of some sort.

My vegan transition started way back in 2007, when I read a report describing the link between processed meats and cancer (among other diseases) and how it was just as bad as smoking. Ham and bacon immediately left my plate, and didn't return.

It was around this time that I started running, first as something new to try but I soon became hooked. I joined race after race, slowly increasing my distance over the years. I was always a middle of the pack runner, and never signed up with an expectation of winning. I was just happy to be surrounded by like-minded people and trying to achieve PBs for myself.

My diet didn't change for several years, until 2011 when I watched the documentary 'Food, Inc'. It completely transformed my thinking. How could I be so ignorant of the way the food world works? It didn't cause me to go vegetarian - not yet - but my actions did change. I rarely bought meat at the supermarket, I made sure any meat and eggs I did buy were free range, and I ordered more vegetarian meals at restaurants. This continued for the next few years, until at some point during 2014 I completely gave up meat. I still don't know when this happened, but I know I went into my first marathon that year on a vegetarian diet. My running and health didn't suffer, and I knew I had made the right choice.

In 2015 I started listening to podcasts, researching both running and vegetarian themes. I discovered No Meat Athlete, a podcast about running on a plant-based diet. I soon realised that the hosts were both vegan and had run ultramarathons, neither of which I had considered before. Veganism seemed too extreme, too restrictive. Where would I get my protein, my calcium, my iron? Surely I needed to eat dairy to get enough of these nutrients? While I know now that these questions are cliched in the vegan world, I had exactly the same concerns myself.

The more episodes I listened to, the more I discovered that being vegan and an athlete was a common combination. There were many professional sportspeople competing at the top of their game on a plant-based diet. I made two decisions at exactly the same time: I was going vegan, and I was going to run an ultra.

I have not looked back.

Eating vegan has been much easier than I thought it would be. I started with a few replacement products, such as soy yoghurt and faux meats, but I soon realised I didn't need to eat them, that vegan food tastes amazing without the processed substitutes. I still eat treats like coconut ice cream and cashew cheese, but they don't define my diet. There are tons of vegan recipes online, and I never feel like I am missing out. It has been one of the best decisions I have ever made.

And my running? I completed my first ultra at the end of 2015, a 50km race in Marysville, Victoria, and I was the first female across the line. I never imagined that I would ever win a running event, but the combination of proper training and diet allowed this dream to become a reality.

After this race I moved to first Thailand, then Vietnam, where I now live, and my running hasn't slowed down. I have completed 10 more ultras and won nine of them, two of them outright (beating the men!). My greatest accomplishment, however, was competing in and winning the Asia Trail Master series for 2017, the biggest trail running competition across all of Asia. And it has been fuelled entirely on plants.

When I meet other runners at races (particularly local Asian athletes), many are surprised to find that I don't eat meat, as this is not common in their culture. What has been overwhelming is the number of these people I see at another race, many months later, who rush up to me to tell me that they have changed their diet. Some have turned vegan, some vegetarian, others have cut back on meat, and all have said that I have been an influence on this decision. I never knew that by running I could alter people's eating habits, but I hope my current success continues so I can reach more people with this important message.