Once I 'woke up' to veganism, I could never go back 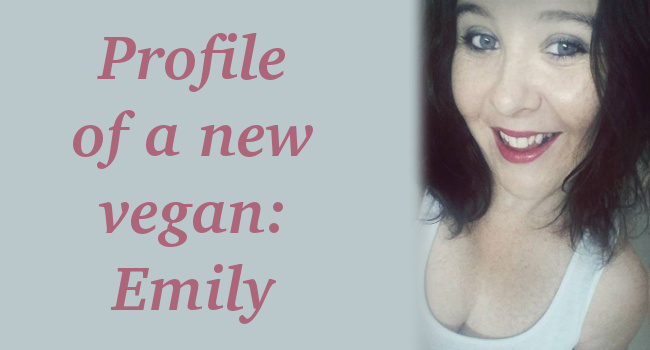 Profile of a new vegan: Emily Lewis used to think vegans were weird. Then she became one! :) Here is her vegan story.

My story may seem a little different to others; it might even come across as odd. The truth is, I never set out to be a vegan - I even used to be someone who was guilty of telling the same old (tired) vegan jokes; in fact, I used to view vegans as weird. I am so thankful that my blinders came off and that I've woken up to living in an ethical way that not only contributes to trying to bring peace to all of us on this planet but also brings peace to myself.

This is how my veganism came to be. I refuse to call it a vegan diet, as that's not what this is for me. This is my life now; it's a huge part of who I am.

I stopped smoking recently, I finally said goodbye to a 20-year habit that was killing me; I also started to meditate during this time, it became habit. It wasn't long before my taste buds returned that meat (all meat) didn't taste good anymore. I also realized during a meditation session that I was now living my life based on kindness, compassion and love and aside from the fact that meat was now tasting like crap, eating it became something I understood was NOT an act of love, nor was it kind or compassionate and it wasn't good for my health.

I stopped eating meat, just like that. I instantly felt better; I also joined an online vegetarian and vegan support group. It wasn't long before I realized that by being a vegetarian, I was still supporting the absolute horror of the meat and dairy industries.

Becoming a vegetarian was so easy. While I knew I had to become vegan to remain true to myself, I was scared. I thought that I'd never be able to give up cheese or sour cream, I also thought I would be judged by my family and friends. I started to blog about all of this and I pledged to cut out all animal products; one small step at a time.

First I cut out eggs, which was easy. Then I cut out honey, which was easy as well. I thought cutting out all dairy and animal products would be a long, difficult journey of self-deprivation. I was wrong; totally wrong. It didn't take me months; it took me days.

I was ignorant; I simply never thought to source what was on my plate because I was too consumed by my appetite, I was to selfish to learn or to care. I did not know then what I know now. I saw cows as commodities; the same can be said for chickens. I saw them as 'things' intended for human consumption, I saw that as their purpose, if I even thought about it at all. The truth is, I wasn't using my brain to the best of its ability when I ate meat and dairy. What I was putting in my body made it easy to remain ignorant and in denial. And so very selfish.

Once I 'woke up' to veganism, I realized that I could never go back. It also took a little while to make amends with myself for not waking up to veganism sooner than I did.

These animals, like us, feel pain. They also feel fear. They love just as we love, they experience joy and they don't seek us out or hurt us. I also realized there is absolutely no reason to eat animal products - humans are herbivores. We can get everything our bodies and brains need from plants, seeds, grains, soy and nuts etc. I basically became aware of an evil industry that unnecessarily tortures and kills animals all due to what humans crave is not something I could ever be a part of again.

I have never been happier or healthier than I am now; sure, quitting smoking helped. But I owe this change to becoming vegan. I wake, eat and sleep proud. I save animals, the earth and myself every single day now. I can say that this has been the best and the biggest change I've experienced in my life and to be able to walk the walk when it comes to living kindly and compassionately rather than just talk the talk feels good.