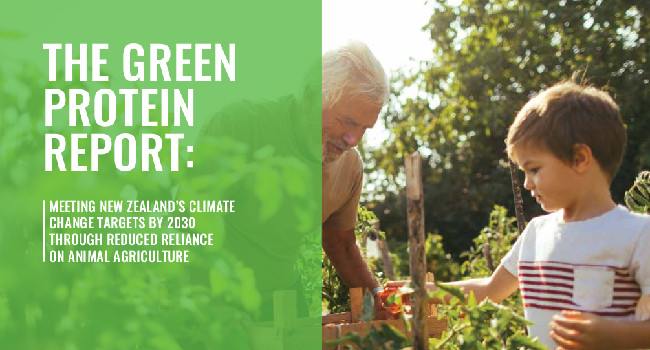 An extensive new report has been published by Vegan NZ on how to transition to plant-based farming to meet climate change targets.

The Green Protein Report urges New Zealand to transition away from its reliance on animal agriculture and focus on developing a plant-based economy.

As the report says, "the planet can no longer sustain a food system dependent on animal agriculture." Problems caused by livestock farming include greenhouse gas emissions, polluted waterways, soil erosion and compaction, deforestation and loss of habitat and biodiversity. Omnivorous diets have a much larger ecological footprint than vegan diets and adopting a plant-based diet is one of the best ways to reduce greenhouse gas emissions.

The report "calls for a change in agricultural strategy. Farmers will need to be supported by Government and industry sectors to transition away from animal farming. They will need support to develop sustainable and financially viable horticultural, agro-forestry, and other rural livelihood opportunities. Such a move away from animal farming will have important positive impacts beyond saving animal lives. It will greatly help New Zealand to meet its climate change targets, and its public health may substantially improve."

The UK Vegan Society has produced the Grow Green Report which argues that a transition from animal to plant farming in the UK would reduce greenhouse gases, improve food security, support full employment of farmers and eliminate the unnecessary suffering of millions of animals.

Vegan Australia has done some work in this area as well, publishing the report Moving to a vegan agricultural system for Australia. We would like to update this report with the latest findings, so if this is your area of interest and would like to help with researching and writing, please get in touch.